@SportsfanaticMB takes a look at running back JK Dobbins rookie profile and he isn’t just kidding when he tells you what he thinks. 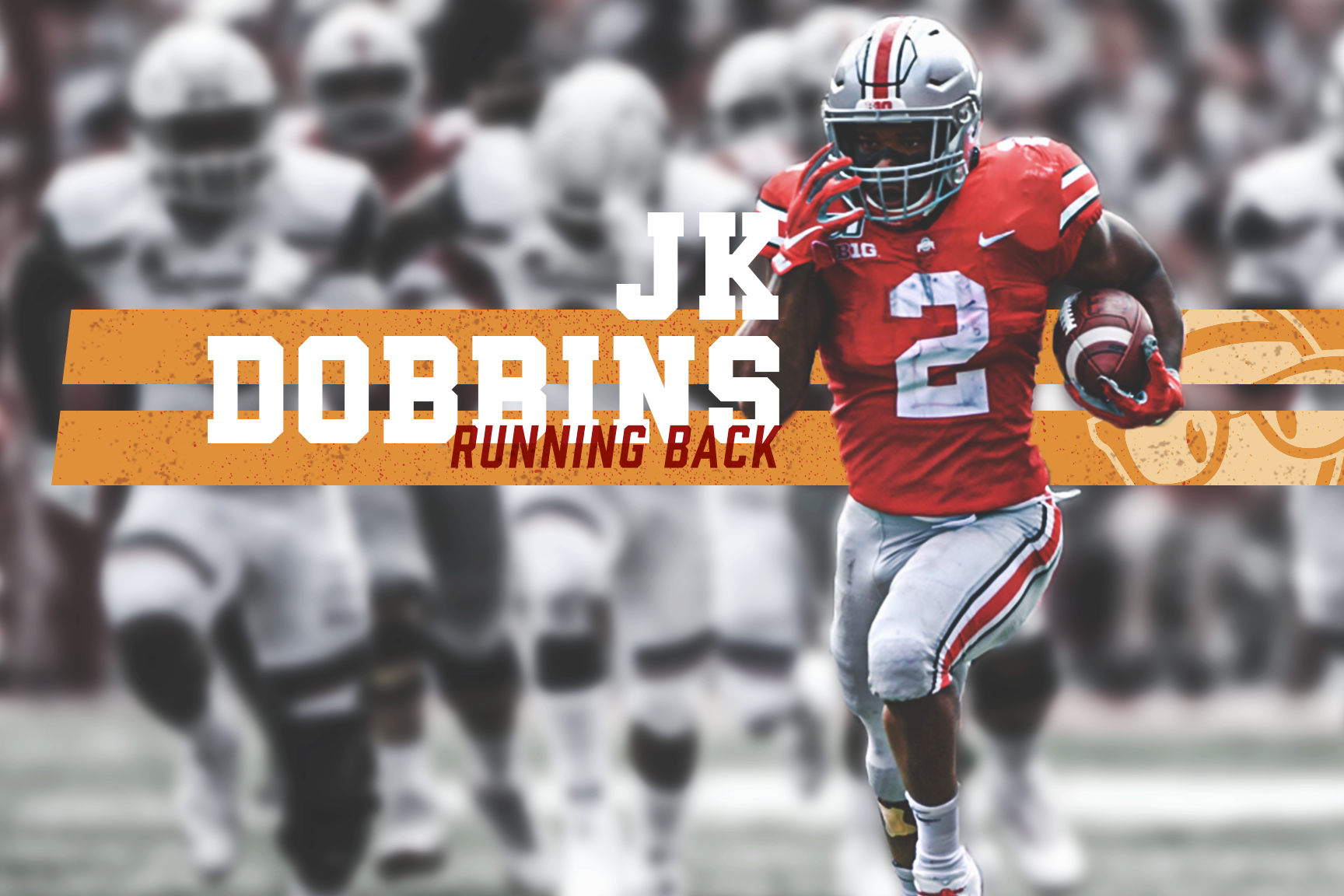 J’Kaylin Dobbins is a junior running back out of The Ohio State University. Dobbins joined the Buckeyes as a four-star high school recruit out of La Grange, Texas. As a true freshman he was forced into action as his running mate Mike Weber got injured. Dobbins impressed everyone in his freshman season with a masterful performance. He finished 10th in the country in rushing yards. He helped lead the Buckeyes to a 12-2 record and Big Ten Champions. While they missed out on the playoffs they were in the Cotton Bowl vs USC which they won 24-7.

Entering the 2018 season as a sophomore many were interested to see if he would be the unquestioned starter for the Buckeyes, or would he end up splitting time with now healthy junior running back Mike Weber. They ended up splitting time which led to Dobbins having a down year by the numbers and not looking like the same running back we saw the year prior. Rumors started to swirl at the time as well that he was dealing with an injury but nothing was substantiated.

When the 2018 season wrapped up the Buckeyes made changes at head coach and also brought in a young talented running back in Master Teague. After having a down sophomore year many believed Dobbins wasn’t as talented as we thought after his great freshman season, doubt crept in for some. Dobbins looking to prove himself took over new Head Coach Ryans Day’s offense. Having an inexperienced QB in transfer Justin Fields, Ryan Day had him rely heavily on Dobbins.

After his disappointing sophomore season, Dobbins looked like a stronger, faster version of his freshman season in 2019. Dobbins became the leading rusher in Ohio State history taking the record away from Eddie George and finishing as the only 2,000-yard rusher in school history. With his play in his junior season, Dobbins has moved into the discussion for the best running back in the 2020 draft class. While this class is loaded with talent and many will argue a few different names at the top.

Dobbins big play % comes out to 19 plays he took over 20 yards, five of which resulted in touchdowns.

Dobbins was heavily used in the first two-quarters of every game. Yet as the game got out of hand you can see they started to sit him or use him less. This is good news for us as fantasy players as it means less workload on his legs, but imagine how much better his stats could have been had he played entire games. Let’s take a look below at what Dobbins does to separate himself from others in this class.

Dobbins shows off his receiving ability here which is critical at the next level. We also get to see an infamous jump cut, barely losing any speed or momentum. Follows his block to the outside and I love that he then lowers the shoulder and takes on the defender instead of running out of bounds.

This is a masterful run by Dobbins and he really shows off his strength and vision here. When you throw on his highlights you will see many runs like this. For starters, he immediately jumps outside and hits the open hole. What I love about this is he accelerates into the hole and stiff arms two defenders in quick succession before dragging one and running through another to get into the end zone.

Vision, vision, and more vision here for Dobbins. The entire team blocks up to Dobbins left as does Michigan defense. Dobbins uses his vision and cutting ability to be able to get outside for the touchdown.

So with all the things Dobbins does so well where does he struggle on the field? For me, he has one weakness, his pass blocking. While he has improved throughout his time at Ohio State, if he wants to stay on the field in the NFL he will need to be more reliable and help keep his QB upright.

J.K. Dobbins will be one of the first running backs taken in the 2020 draft and, in my opinion, should be the RB1 in this draft. While he may not be the most elusive like Swift, or the most explosive like Etienne, or even the best pure runner like Taylor. Dobbins excels at everything and only has one “weakness” which he has already improved on.

Dobbins would be a great fit for many teams as he is a versatile back. Wherever he is drafted he should contribute right away. I don’t envision a running back going in the first round, but do think Dobbins will go early second. The teams I think could target him early are Miami, Chargers, Indianapolis, Tampa Bay and even possibly Atlanta. If he lands on any of these teams I think he has a chance to continue the trend of a rookie running back finishing as a top 12 RB. My two favorite spots for him to land would be Indianapolis and one not on this list the Kansas City Chiefs.

That completes the J.K. Dobbins draft profile. Continue to check back as new profiles will be released every couple of days. If you want to see more of my work you can find me on twitter @SportsfanaticMB and also on my podcast Fantasy Football Roundtable, where we will be discussing all the hot off-season topics and prospects.