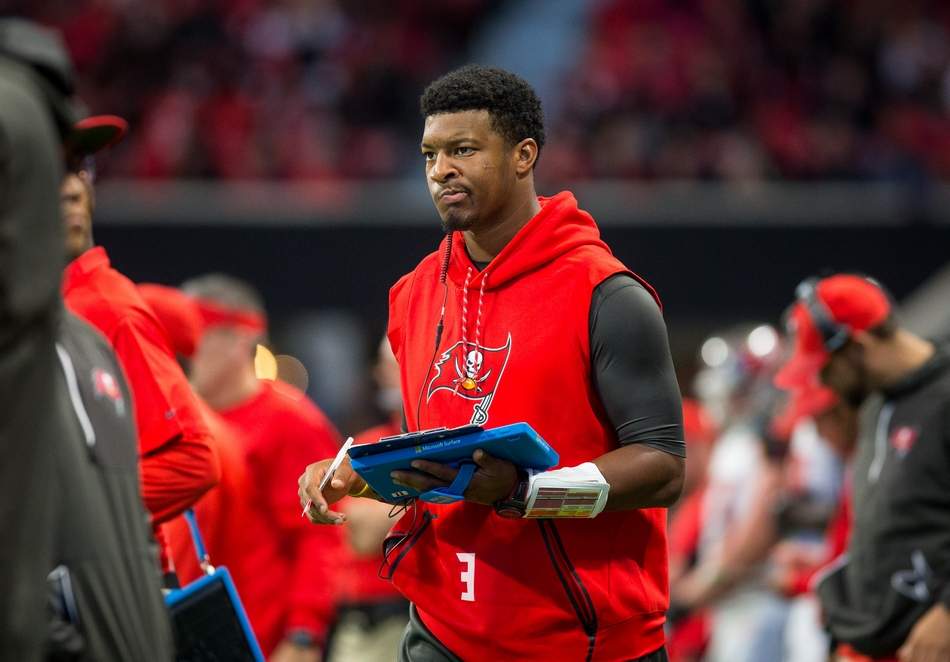 The news came down yesterday from ESPN’s Jeff Cameron and was shortly confirmed by Adam Schefter at around 3 pm EST that Tampa Bay’s franchise quarterback Jameis Winston will be suspended for the first three games for violating the personal conduct policy. This was due to an incident with an Uber driver that the team and league learned of and after investigating ultimately decided the suspension was needed.

ESPN’s Tallahassee host Jeff Cameron initially reported Winston was bracing to be suspended – and he will be.

The news of Jameis Winston’s suspension to start this season likely means the Buccaneers will have veteran Ryan Fitzpatrick stepping in at quarterback for the first three games of the regular season for 2018. “Fitz Magic” took over as the starter for three games last season when Winston was sidelined with a shoulder injury. He went 2-1 in those games, helping the Bucs to victories against the Dolphins and Jets in that timeframe. Fitzpatrick limited his mistakes in those three starts, with only one interception in 115 passes, while throwing for three touchdowns and 745 yards, also earning 73.7 fantasy points in that stint in PPR format per Pro Football Reference. 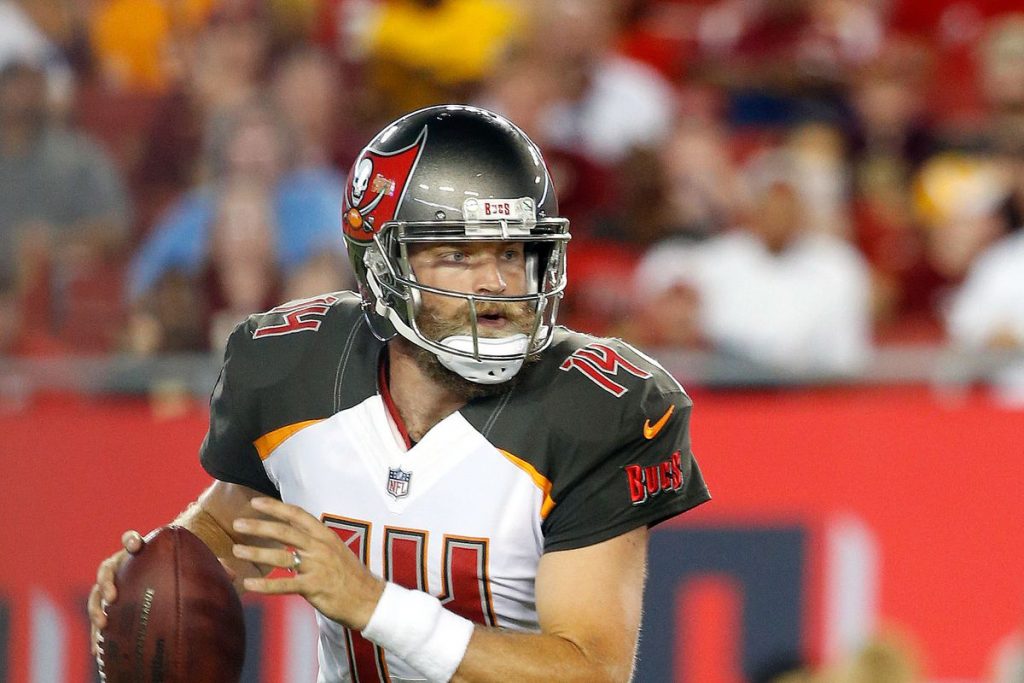 Fitz’s next three games will not nearly be as easy, ranking among the most difficult on the team’s schedule this year, all against 2017 division champions. Tampa Bay will open at New Orleans against the NFC South champion Saints, then play host to defending Super Bowl champion Philadelphia Eagles, before another home game on a Monday night against AFC North winner the Pittsburgh Steelers. Those three opponents went a combined 37-11 last season. A tall feat to try to overcome for the signal caller from Harvard.

At 35, Fitzpatrick is hardly the oldest quarterback to open a season starter as we all know about Tom Brady starting his new season at the age of 41 when it kicks off, not to mention NFC South rival Drew Brees will be 39 as well. The veteran still has shown no signs of his arm strength decreasing, and instead has improved with becoming more comfortable in the pocket and making smart and decisive decisions as his record reflected that in the three games he played last year.

For his career as a whole, Ryan Fitzpatrick has passed for 26,991 yards and 173 touchdowns against 136 interceptions. Last year’s 2-1 record marked just the second time in his 13 NFL seasons that he had a winning record as a starter, he went 10-6 with the Jets in 2015 the last time that happened. 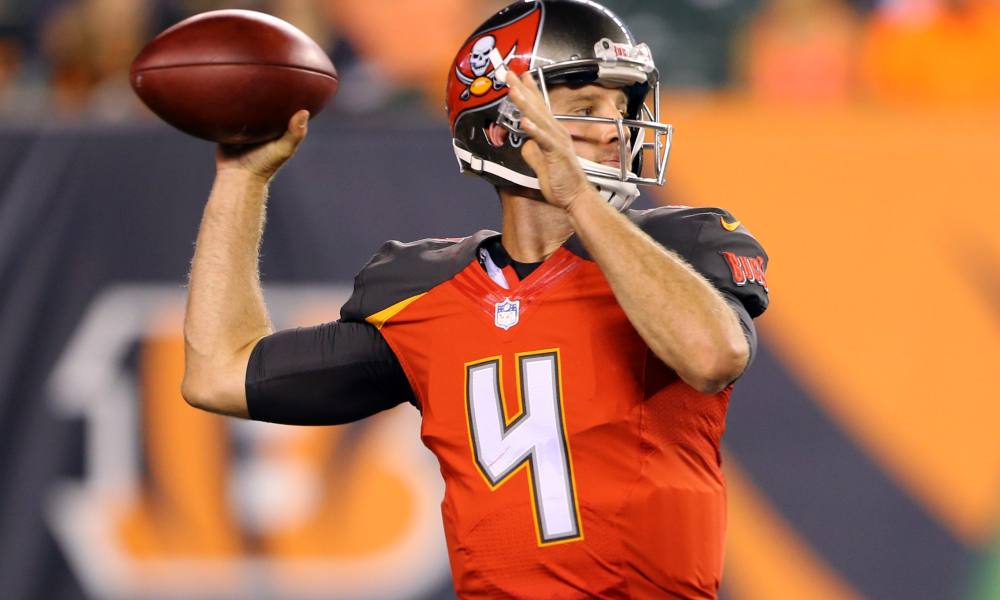 With Winston’s three-game suspension not likely to be appealed, Ryan Griffin is also the other QB in town that will compete against Fitzpatrick. Griffin, 28, who last played for Tulane University, has spent the past three seasons as a backup, but he has never played a snap in a regular-season game. According to Tampa Bay beat writer Greg Auman, he has all training camp long to try and beat out the bearded veteran Fitzpatrick and will have all eyes on him from the coaching staff to see if he’s finally ready to take over and earn his first official NFL career start.

So what does this mean for fantasy purposes for some of our favorite assets like Mike Evans, DeSean Jackson, O.J Howard, Cameron Brate, and dynasty darling favorite Chris Godwin?

Well ultimately when it comes to Mike Evans, not too much changes as he was peppered with 31 targets over that three-game span which was fantastic, however, the fifth-year pro was only able to turn that into 14 catches for one touchdown equaling to only about 45.2% success rate. It was evident in what we saw from the Texas A&M wideout with the decline of his production in 2017 and didn’t live up to his high average draft positions in most dynasty startups. Many believe that Evans is in for a big bounce-back season and could really be the main focal point again for either Ryan that starts and will be relied upon heavily to move the chains.

And as for “DJax”? Not such a rosy outlook. This past offseason Jackson and Winston had been working in “harmony” amongst the coaches talk at press conferences and was trying to make up for the lowest production of his 10-year career of 50 catches for 668 yards, and three touchdowns. The lack of reps with Fitzpatrick to date means that DeSean will have to do his best to find that same rhythm with him as he has with Jameis over these past few months. With this news and the age of Jackson, he can be a very cheap pickup for trade if you are in win-now mode once Winston returns, and if you’re looking to sell you may be able to use his name value and what he’s capable of to earn a few rookie picks if you haven’t drafted already or the 2019 class which is loaded with potential wide receiver candidates that have been talked about as the best assembly of talent since the 2014 WR corp that came into the league.

Chris Godwin has really been the shining star in camp over the offseason and has really impressed the coaches and beat writers down in Tampa Bay. He capped off his rookie season finishing with 34 receptions for 525 yards, and one touchdown. When Mike Evans was suspended one game for a late hit on Marcus Lattimore of the Saints, Godwin took over and thrived racking up 5 receptions for 68 yards. Now with him looking to beat out Adam Humphries and start opposite of Evans while Jackson plays out of the slot position, this could be a big breakout year for him. He has spent all offseason spending time with Evans and Jackson, taking advice and learning their different traits and strategies, and it’s shown in camp. Although the first three games this season may be capped for his ceiling, he is an excellent choice for a buy-low candidate as he is likely to have a breakout season any time now. 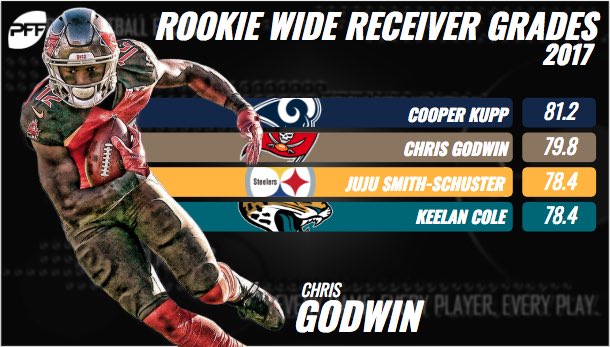 As for Cameron Brate and O.J. Howard? Howard played in two out of the three games with Fitzpatrick and in both games landed with 3 receptions off 4 targets and 52 yards exactly in both games, however finding the end zone for one touchdown in their contest against the Dolphins. Brate was only able to perform for 3 receptions total for 28 yards and no touchdowns during the Fitzpatrick occupancy of being QB1. So the advantage goes to Howard in these first few games of the 2018 season and most owners could have a consistent target share. Brate owners will need to be cautious and probably sit him for a replacement until Jameis returns.

I hope this article has helped with how to make sense of this unfortunate suspension of Jameis Winston, and it gives a bit of direction on how to handle the other pieces of the offense around him as a backup will take place for the first three weeks. Please feel free to leave your opinions and comments as I always look forward to seeing what the fantasy community has to say. Until then, see you next time my fellow Dynasty nerds!