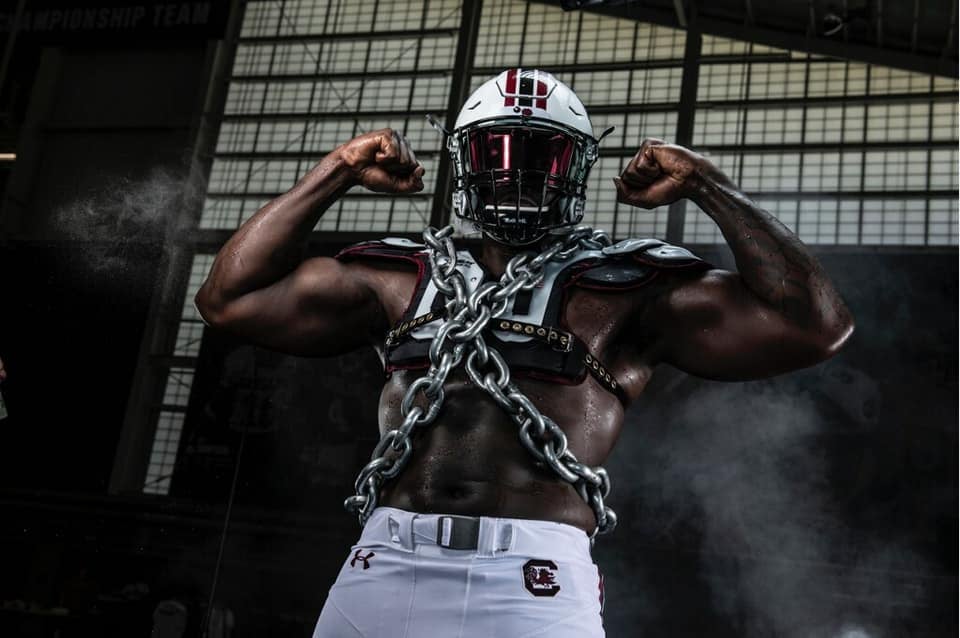 Javon Kinlaw is entering the combine and NFL Draft this off-season already built like most the NFL players he will soon be facing. At 6’6″ and over 300 lbs, of what nutritionist would call, low body fat, his stature is just where we start our dive into the “Man Child” that is Javon Kinlaw.

Kinlaw’s road to prominence was not an easy one. Left homeless with his mother and brother at 10-years-old the family relied on the kindness of neighborhood friends to get by. After years of struggling Kinlaw was sent to South Carolina to live with his father. This provided the stability he needed to become a high school standout at Goose Creek High School.

With a subpar academic record in high school, Kinlaw ended up at Jones County Junior College in Ellisville, Mississippi. There he recorded 35 tackles 6 tackles for loss, and 6 sacks to earn first-team All-MACJC honors. After 2016, the once homeless Washington, D.C native, set sail for Division 1 Football at the University of South Carolina. Kinlaw went on to put up respectable numbers in each of his 3 seasons and is now considered a top DT in this year’s draft.

Before the Senior Bowl, I personally was ready to plant the flag on Kinlaw as my DT1 and said as much on the RatedIDP podcast with my guys @Dingas4 @DFF_DWIN. Javon’s potential and physical attributes are what got this IDPNerd, intrigued!!

I began watching tape of Kinlaw from when he was at Jones County Junior College. Immediately his presence and size stick out. All I could find at first was highlight packages that showed him being the far superior athlete on the field. Getting the jump on any offensive lineman that came in his way, double teams with ease at times, chasing down offensive playmakers with a 15-yard head start.

Then I happen to stumble onto some full game tape. From the opening whistle, as the smell of gunpowder settles in the air, and the band is as loud as they will be all night. Full of air in their lungs and energy level in the stadium hits decibels that the locals will all claim, “Was the loudest its been, since the 1966 team beat Sallisaw 45-0 on Homecoming Night”.

The highlight videos were not wrong, he will, can, and does take over games, showing the potential that will have NFL scouts salivating. buuuuut… It did have moments that made me see why the stat sheet didn’t always match the newest, X-Man’s presence and stature. He can be outmatched by lineman that are professors of the game. Meaning, the film junkies that prepare on another level than others. Kinlaw has every physical attribute, from size, speed, and agility to having the range of an Ivy on a spring morn, as the morning dew gives it just enough to drink to reach for the sun another day.

Instincts are often put on the back burner due to the fact he has to focus all his effort and mental fortitude to cover for his lack of pass rush moves. He can be taken completely out of an opponent’s march down the field, because he is guessing or just bull-rushing every stunt. While he showed growth in this department his senior season at South Carolina. The SEC Powerhouses vs South Carolina 2019 film speaks for its self. Kinlaw can be completely schemed out of the play due to the other weapons on defense around him.

Using a double team on a DT isn’t ideal, especially when the rest of the defense is light on their feet and quick to the ball. So when you watch one of the greatest college football coaches of all time, Nick Saban, specifically gameplan a player out of the game, you add a checkmark. If you are already high on the player pre Senior Bowl and he goes to the game and dominates it. You add another checkmark. When you add the measurable’s that will be documented officially at the combine… Ladies, Gentlemen and #NerdHerd Homies… Javon Kinlaw is my #1 IDPFF DT Prospect for the NFL 2020 Draft.

Thank You for reading the first of many IDPFF profiles here at DynastyNerds. Please give me a follow on Twitter @OklahomieDoug and let me know who you want to see a deeper dive into. Share what your league settings are (1qb, 2qb, 2LBs, 4 DL, or DT & DE), sack scoring and tackle scoring. That way I can give you the most in-depth answer possible. Heck, I might even feature them and your questions into the next, IDPNerd Prospect Profile article.