Gage Bridgford (@GbridgfordNFL) breaks down one of the top receivers in the class in Alabama’s Jerry Jeudy. 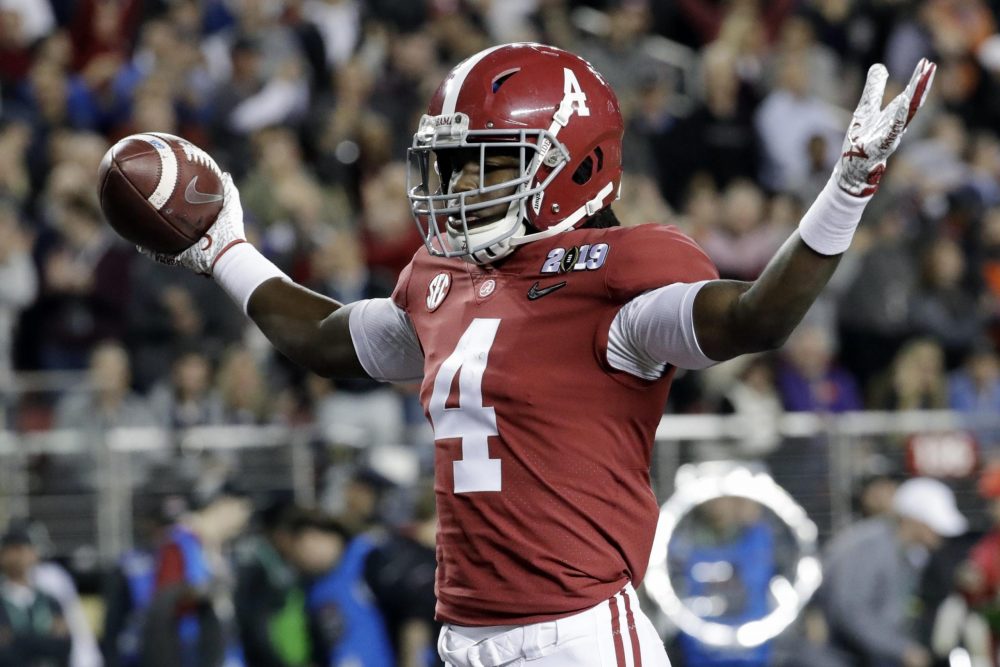 Gage Bridgford (@GbridgfordNFL) breaks down one of the top receivers in the class in Alabama’s Jerry Jeudy.

Alabama wide receiver Jerry Jeudy is one of the most fluid receivers in this class, and he’s one of the best receiving prospects to come out in a few years. He was named as a first-team All-SEC wideout by the coaches, and he was voted to the second team by the AP. He only had 10 100-yard games in his career because Alabama is juiced with receiver talent, such as Henry Ruggs III who could be a first-round pick this year.

Jeudy is leaving school with his name all over the school’s record books. He’s top five in receptions, yards and touchdowns, where he ranks second. He averaged an impressive 17.2 yards per reception which is incredible considering the volume of receptions that he had during his time in school.

The former five-star recruit came to Alabama, and, after a quiet freshman campaign, he dominated for two years against the best players in college football. Due to his skillset, Jeudy might be the most scheme independent receiver in this year’s class. He can do the same thing for anyone that was to draft him, and he would be able to do it at the highest level on an every week basis.

Jeudy showed a nose for the end zone thanks to being the lead receiver on a loaded offense. After totaling just two touchdowns during that first year, he came down with 24 of them during his final two seasons combined. Jeudy’s nose for the end zone is something you love to see out of a guy that’s not the biggest and won’t be relying on jump balls.

Jeudy was one of three receivers to get a game of over 200 yards during the 2019-20 season, and he got his on the back of some big plays. He caught just six passes for 204 yards in the team’s final game against the Michigan Wolverines. That was one of his five games over 100 yards on the season. He also had at least 41 yards in all but one contest during that final season.

Looking at the Alabama record books, of the three receivers ahead of Jeudy in yardage totals, two of them, Amari Cooper and Calvin Ridley, have become top receivers in the league, with the outlier being D.J. Hall, who played during the middle of the 2000s and never caught on in the NFL. Jeudy is playing for a school that has quietly produced some great receivers for the NFL, and he’s among the top players at the position.

One of my favorite attributes of Jeudy is his after the catch ability. He’s the prototypical example of a get him the ball and let him make a play type of receiver. He regularly sizes up defenders and makes them look silly in the open field. He doesn’t excel in jump-ball situations, but he doesn’t need to for the way he can create extra yards with the ball in his hands.

Alabama had two wide receivers that are first-round prospects. They also had two other receivers who could be first-round picks when they enter the draft. What did they do with Jeudy with all of that talent next to him? They got him touches any way possible. Whether it was a bubble screen or another quick pass, they were getting the ball in his hands for what he could do once he had the ball.

Jeudy might be the best route runner in this class. He doesn’t have the raw speed that his teammate Ruggs has, but his suddenness helps set him apart. He’s got a cornerback on him in press coverage, and he snaps off the route so suddenly that the corner goes falling down past him. He’s shifty, and wide receivers like him are such a problem to cover.

People talk about how Jeudy only has short-area quickness. He sees that he’s one-on-one with the safety, who is playing 20 yards off of him at the line of scrimmage, and he flat out dusts him. He is gone, and he’s walking 20 yards into the end zone because there is no one in the same zip code when he catches the ball.

Jeudy is the number two wide receiver in this class for me, but he is nipping on the heels of my WR1, which is CeeDee Lamb of Oklahoma. His route-running is clean, and he possesses better speed than he gets credit for. He might be the most scheme-independent receiver in the class, and, even if he never reaches his full ceiling, he’ll be one of the most consistent receivers in the league for years to come.