Join us as @Nick0629Nick dives into the anomaly of the 2020 NFL Draft; Utah State quarterback Jordan Love. 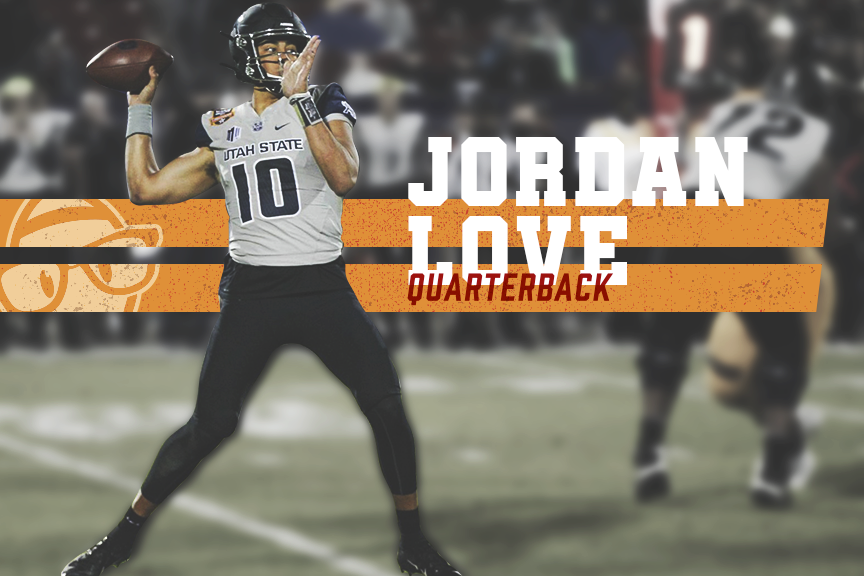 Jordan Love is an anomaly going into the 2020 draft. It is hard to gauge if he will be a franchise quarterback or just another bust. While players like Joe Burrow instill the confidence that they will be a game-changer, Love does not engender that same kind of confidence. Primarily because after a polarizing sophomore year Love could not repeat the same production and had a down year for his junior year with an even weaker schedule.

In his Sophomore year at USU, Love was handed the reigns of the offense as he was named the week 1 starter. During that year he shined by breaking the school’s single-season passing record by throwing for 3,567 yards and 32 touchdowns. Love was also named the MVP of the New Mexico Bowl that year. Unfortunately, Love saw production drop the following year in what was arguably an easier schedule with his toughest opponents being LSU and Boise State. He only threw for 3,402 yards and 20 touchdowns.

Love has a lot of strengths that could translate naturally to the NFL. Blessed with prototypical size and plus arm strength Love had a solid NCAA career. Let’s take a closer look at those strengths.

For starters, Love possesses amazing arm strength. He is capable of stretching the field with deep passes and taking the top off the defense when called upon. His accuracy when throwing the deep ball is well above average and will translate great in the NFL due to star quarterbacks such as Philip Rivers and Drew Brees having success when it comes to their ability to make a long completion and keep their team on the field.

This was one of Love’s most underutilized strengths during his time at USU. When he has realized that all of his reads have no chance of providing success, he was able to scramble and extend the drive. He is also capable of taking an available hole during red zone packages and go in for the touchdown. After accounting for 1190 yards and 13 touchdowns during high school, he did not go mobile near as much in college after only rushing for 175 yards on 81 attempts during his junior year which was just as much as his freshman and sophomore year combined. Even though his college production doesn’t correlate to the potential, I believe Love has what it takes to be comparative to Kyler Murray or Deshaun Watson in terms of running ability, the reason being is even with the step-up in playing ability during college, a Quarterback should not see a significant drop in rushing production unless the offensive scheme does not call for a lot of QB designed runs. The main key for Love’s success in the NFL will be for an Offensive Coordinator to design a system that plays to his strengths and let him run more.

To be a great Quarterback in the NFL you need to have an impressive football IQ and Jordan does possess this essential skill. One thing to note about him is that his coaches at USU praised him for “Having a high football IQ and executing the offense at a high rate.” He is capable of noticing when the opportunities are available and can capitalize on the opportunities that come forward. That will be his biggest asset going forward in the draft process.

While there are a lot of great things about Love, there are some major issues that will make the pro scouts worry about his capabilities as a starter in the NFL. The first is his timing. While he is accurate on his deep throws, his short and mid-range will need some work. Frequently Love waits too long to deliver the allowing for the defense to make a play. On the other side of that coin, he often delivers the ball too early not allowing his receiver time to get into his route and find the ball. Another concern is the level of competition Love played. It is hard to gauge how he will perform in the pros because of the weaker college schedule that produced a 61% career completion percentage and a 2/1 TD to int ratio.

Outlook in the Pros

To me, Love is the 2020 version of Josh Allen, both from the Mountain West and have issues with turnovers. Love is mobile and has what it takes to be a franchise quarterback but will need an Offensive Coordinator and QB coach who can design a game plan fit to his strengths. Don’t expect him to contribute right away as it wouldn’t hurt for him to sit behind a veteran quarterback for a season to learn the system. In dynasty drafts, I wouldn’t draft him any earlier than the mid 3rd round behind Burrow, Tua, and Herbert.