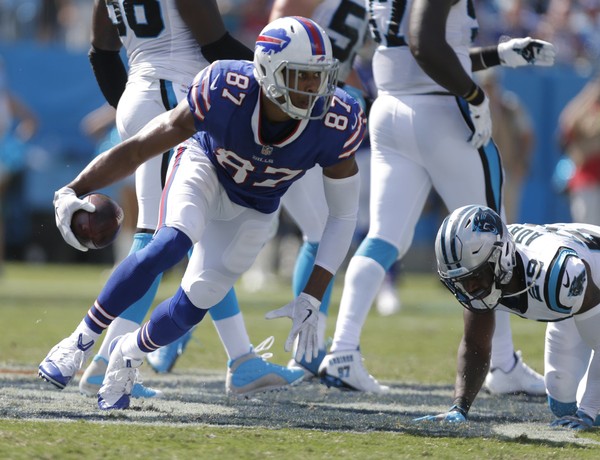 Just a short time ago, wide receiver, Jordan Matthews, was considered an overall top-24 asset, especially in PPR leagues. Coming out of Vanderbilt, there was a lot of hype around Matthews after he was drafted by the Philadelphia Eagles in the second round of the 2014 NFL draft. At the time, Chip Kelly was the head coach in Philly, and Matthews looked like he was going to be a key piece in a high flying offense.

In his first three seasons in the NFL, Matthews averaged 75 receptions, 890 yards, and 6.3 TDs per year. He enjoyed a breakout year in 2015, posting career highs in receptions (85) and yardage (997), making dynasty owners very happy with their selection of Matthews in the first round 2014 rookie drafts. After his rookie year, Matthews was the 24th selected player according to DLF’s 2015 ADP. After a down year in 2017 with Buffalo, Matthews’ latest ADP on DLF is #143 overall. Entering 2018 as a free agent, is Matthews worth a buy low, or should prospective owners be concerned about Matthews’ history of lingering knee issues?

As you can see in the table below, Matthews didn’t miss any games during his first two professional seasons. However, in 2016, Matthews started to pop up on the injury report a little more frequently with lingering knee issues, which was described as “tendinitis.”

Patellar tendinitis can be a challenging injury to play through. This painful condition affects the patellar tendon at the front of the knee, just below the kneecap. It is essentially an overuse type of injury and is often found in athletes who do a lot of jumping, which is why it has been given the nickname, “Jumper’s Knee.” Because it’s an overuse type of injury, the primary treatment is reducing irritation to the knee with relative rest and controlled exercise. For an NFL WR, this is just not possible when you need to perform on Sundays.  As a result of this pain, the Eagles often limited Matthews reps throughout the week in an effort to have him available on Sundays. Ultimately, Matthews missed 2 games in 2016 due to his tendinitis.

In 2017, Matthews had a terrible season in Buffalo, posting the worst statistical season of his career. He injured his thumb early in the season and missed 3 games after undergoing surgery to repair a torn ligament. Later in the year, Matthews’ name again showed up on Buffalo’s injury report with knee issues once again. He missed another game before finally being put on injured reserve after Week 13. At the time, there weren’t many details surrounding Matthews’ knee injury, but more details are beginning to surface.

Matthews underwent surgery on his left knee in mid-December. It’s unclear what exactly was done during this surgery, but Matthews was recently quoted saying he got a “bad diagnosis” from the doctors in Philly and was told his “injuries would heal on their own.” Once in Buffalo, Matthews apparently got a new diagnosis, which led him to his surgery towards the end of last season.

I won’t speculate as to what was done during this surgery, but I am confident that the surgery was not to address patellar tendinitis. There’s a good chance that this surgery was done to address an issue in the knee joint itself.  Matthews’ availability during off-season OTA’s will provide a lot more details. If this is just a “clean up” surgery, Matthews should be ready for OTA’s and have no limitations heading into the 2018 season, where he will look to get back to his form from 2014-2016.

Jordan Matthews is one of my favorite off-season buy lows in dynasty. He offers WR2 upside if he lands in the right situation and can be had for a third-round rookie pick. This is a phenomenal price to pay for a guy who’s proven he can be a very effective slot receiver in this league, and there’s a chance we still haven’t seen the former Vanderbilt wide receiver’s best performance given that he’s dealt with lingering knee issues for much of his career.

Brate Yourselves, OJ Howard is Still Coming
2018 dynasty players bouncing back from injury