Josh Jacobs: Should I Trade or Should I Hold?

Jacobs owners have seen his value decline after a season where he was a RB1. Should you hold onto the Raiders RB for possibly another RB1 season or get out while his name still holds value? 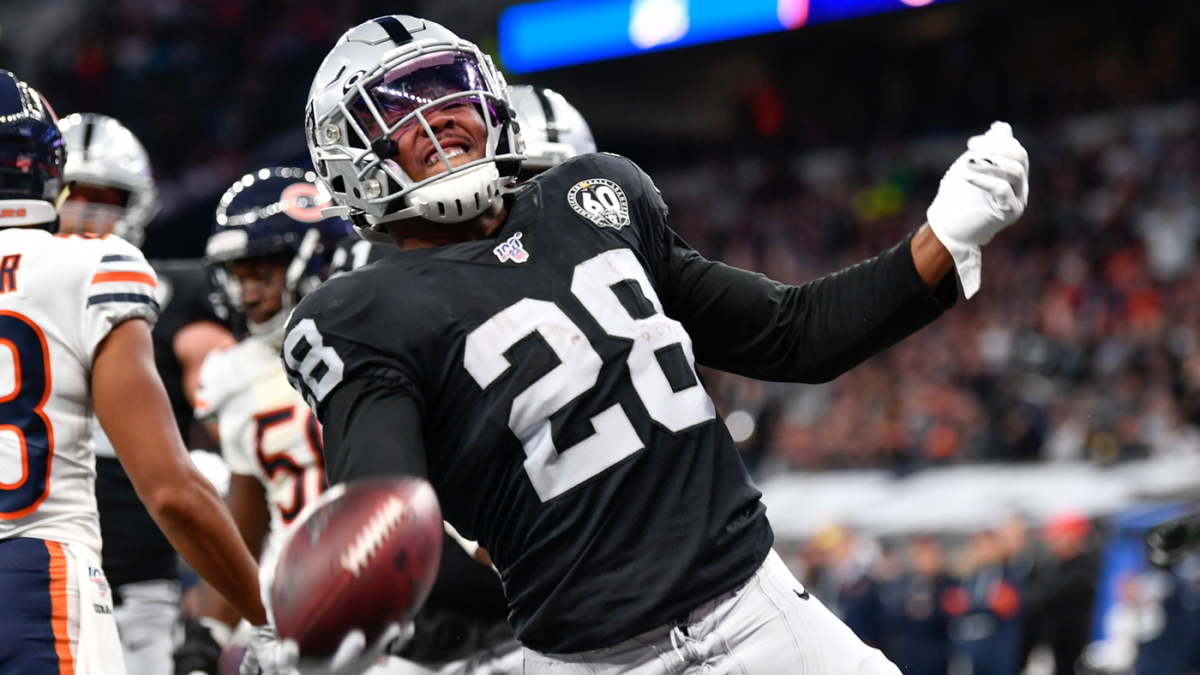 Close your eyes. Wait, no. You’re reading this. Keep reading. But use your mind’s eye. Imagine a running back who has only played two years in the NFL. He turned 23 this past February. The youth checkbox has a big red X on it.

Production-wise, this running back has eclipsed 1,300 scrimmage yards in both of his first two seasons. In his first season, he had seven rushing touchdowns, and in his sophomore campaign, he raised that number to 12. He has also stayed fairly healthy, only missing four games in those combined first two years.

Now come back from your mind’s eye and know the back I am describing is Las Vegas’s Josh Jacobs. Maybe this isn’t all that surprising. You are fully aware that Jacobs has had a great start to his career. Yet somehow, Jacobs has slipped quite a bit in value this offseason, even though he is coming off an RB1 season.

Jacobs was the eighth-best running back in 2020 in standard, half-point, and full-point PPR. He is number 41 overall and RB19 in PPR, non-SuperFlex ADP in the DynastyNerds mock draft tool. Even in standard scoring without PPR (receiving isn’t Jacobs’s best asset), Jacobs is drafted as the 18th RB off the board.

Where is the disparity in Jacobs’s output and youth versus where he is being drafted in mock drafts and startup leagues? Why has Jacobs’s value diminished after what seemed to be a prosperous year for the young running back? Should you be looking to trade away him if he is currently rostered on your team? Or should you be holding onto him?

Jacobs came into the league in the 2019 NFL draft. It was a class that did not have a lot of hype around it in dynasty leagues. Looking back, we can understand a bit of that reasoning.

Jacobs was considered the 1.01 in almost every dynasty league. And for a good reason. He was a first-round draft pick to the Raiders, an offense lacking much competition for the top running back slot. He had scored 14 TDs and had averaged 5.3 YPC in his final year at Alabama.

Within the first few games of his rookie year, Jacobs showed he was worth a high rookie pick. In his first five NFL games, Jacobs totaled 430 yards and four TDs, averaging 4.89 YPC. Coach Jon Gruden seemed to like Jacobs as the primary back, giving Jacobs 88 carries in those first five games. While only giving 21 carries to DeAndre Washington and 11 to Jalen Richard.

Jacobs’s rookie year ended with him missing three of the final four games with a shoulder injury. He ended with 1,150 rushing yards and seven touchdowns.

In Jacobs’ sophomore season, he had relatively the same yardage output with 1,065 rushing yards, but he was able to punch the ball into the end zone 12 times. This all came on 273 rushing attempts, the third-most in the league behind Derrick Henry and Dalvin Cook.

Through two seasons, Jacobs has been a reliable and often used back for the Raiders. But some changes in Las Vegas could spell difficulties for Jacobs this coming year.

While Jacobs had two excellent years to start his career, the Raiders brought in some help in the backfield this offseason that could take away from some of Jacobs’ production.

On the surface. the signing of Kenyan Drake in Las Vegas seems like a move geared more towards a running back by committee than a backup for Jacobs.

And it is hard to tell where the roles will split between Jacobs and Drake. Looking at the 2020 rushing stats for all running backs, we can see they had very similar seasons. Jacobs edged Drake in both attempts (273 to 239) and yards (1,065 to 955), but the stats are very similar.

On top of this, they were both productive in goal-line situations. The following is the production of rushes from inside the 10-yard line in 2020 for all running backs.

Jacobs and Drake both had 35 attempts inside the 10 and scored nine TDs in 2020. In fantasy football, where touchdowns are an instant plus-six to your point total, having the opportunity to run near the goal line is a major bonus for running backs.

In a lot of ways, Jacobs and Drake had almost identical 2020 campaigns. The only considerable separation now between Jacobs and Drake is their age. Drake turned 27 this offseason while Jacobs is only 23.

It is almost impossible to know how the Raiders will use both of these backs, but I don’t think the plan is for Drake to replace Jacobs in the backfield. Jacobs is still the top running back on the depth chart in Vegas. And as one of only ten teams to run the ball over 45% of the time in 2020, the Raiders are a team that gives their backs the chance to produce.

So, where is the line drawn for the Raiders this season? Who will lead the team in carries, and who will be in more of a backup role? Or will these backs end up splitting the role evenly?

Right now, Jacobs is still a good enough name that you may be able to sell him in your leagues if you are worried about Drake. But there is risk in selling quickly on a 23-year-old running back who was the eighth-best fantasy back a season ago.

If you have concerns over Drake taking a huge chunk of Jacobs production, it would probably be best to move on from him while you can still get a solid return. At Jacobs’s age and the production he has shown, you should at least be getting a first and second-round pick in return for the back.

But I truly believe you are selling Jacobs too soon if you move him now. Currently, Jacobs’s stock has gone down quite a bit, as evidence by his ADP mentioned earlier. If Jacobs comes out in 2021 and is the lead back in the Raiders offense again, he is worth much more to you than a first and second-round pick.

Jacobs is young, has been productive, and has been given opportunities to succeed in every game in the Raiders offense so far in his career. If the team continues to give him goal-line snaps and plenty of carries throughout the season, Jacobs will be right there in the RB1 mix once again in 2021.

If you are a championship contender, I think you need to hold Jacobs. Now, if you don’t have him and are close to a title team, kick the tires on the owner in your league who has him. A rebuilding team may be willing to part with the young back for just a couple of picks.

While the second-year backs like Jonathan Taylor, D’Andre Swift, J.K. Dobbins, and Clyde Edwards-Helaire will cost you the entire farm to acquire from another owner, Josh Jacobs is a smart and affordable option while only being a year older. Sometimes the 2020 Prius is the right choice instead of the 2021 Mustang. Getting Jacobs at an affordable rate could be a championship move for your team, so look at striking while Jacobs is still undervalued.