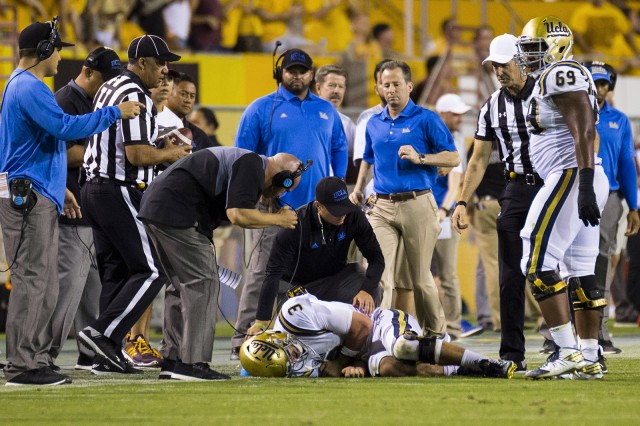 Josh Rosen is certainly up for debate as the top rookie QB prospect in the 2018 class. He throws a great ball, has a nice quick delivery, and is a prototypical NFL pocket passer. Rosen will most certainly be a top 10 pick in next month’s NFL draft, making him an attractive option in dynasty leagues, especially in Superflex and 2 QB formats. Rosen figures to be successful at the next level, but should you consider his injury history? The purpose of this article is not to argue whether or not Rosen is better than Baker Mayfield, Josh Allen, or Sam Darnold. Rather, I present Rosen’s injury history in order to make you a more knowledgeable dynasty player.

For starters, let’s take a look at Rosen’s production while at UCLA. Rosen shot onto the scene and gained national recognition early in his collegiate career after playing in 13 games his freshman year. After a down year in 2016 hampered by injuries, Rosen returned to form in 2017 during his junior season. He posted career highs in completion percentage, passing yards, and TDs all while playing in two fewer games, again missing time because of injury.

During his sophomore season, Rosen was injured in early October in a game against Arizona State. Rosen injured his throwing (right) shoulder late in the game during a sack near the sideline. After attempting to return a few weeks in a row, further imaging showed structural damage, which required surgery. The exact details of Rosen’s surgery and injury couldn’t be tracked down with 100% confidence, but one resource below (turnonthejets.com) describes a debridement surgery in addition to a small tear in one of the rotator cuff muscles. One thing we do know is that there was structural damage – it’s just a matter of how much and what? Any number of surgeries could have been performed – a rotator cuff repair, a debridement (clean up) surgery, or a repair of the torn labrum. These surgeries each carry a different timeline when it comes to recovery and a return to throwing. However, based on the fact that Rosen was injured in October of 2016 and returned to play in UCLA’s spring game in 2017, we can assume there were no complications in his recovery. Moving forward, I don’t have any concerns about Rosen’s throwing shoulder. If he were going to have any issues, his performance likely would have suffered in 2017.

Rosen may have entered 2017 healthy, but he certainly didn’t finish it that way. During his junior year in 2017, Rosen suffered two concussions in less than a month. As we’ve seen with many other players, subsequent concussions in a short time period raise a major concern about a player’s long-term health. Research suggests that players who experience more than one concussion throughout their career are more likely to experience an additional concussion at a later date. This effect increases as a player suffers more concussions. In other words, a player with five concussions is much more likely to get another concussion compared a player who’s only had two. Concussions are very hard to predict, but we do know that Rosen is at a slightly increased risk for missing time due to a concussion. If he lands behind a poor offensive line early in his career, and he takes more hits than other QBs, his career length could be shortened if he experiences a concussion early on in his career.

Combine Destroyer Mike Gesicki
Bye Bye Barkley: Why you should shop the 1.01