Justin Herbert is the most controversial QB in this class. Let @SportsfanaticMB tell you why he has the chance to be the best of this class. 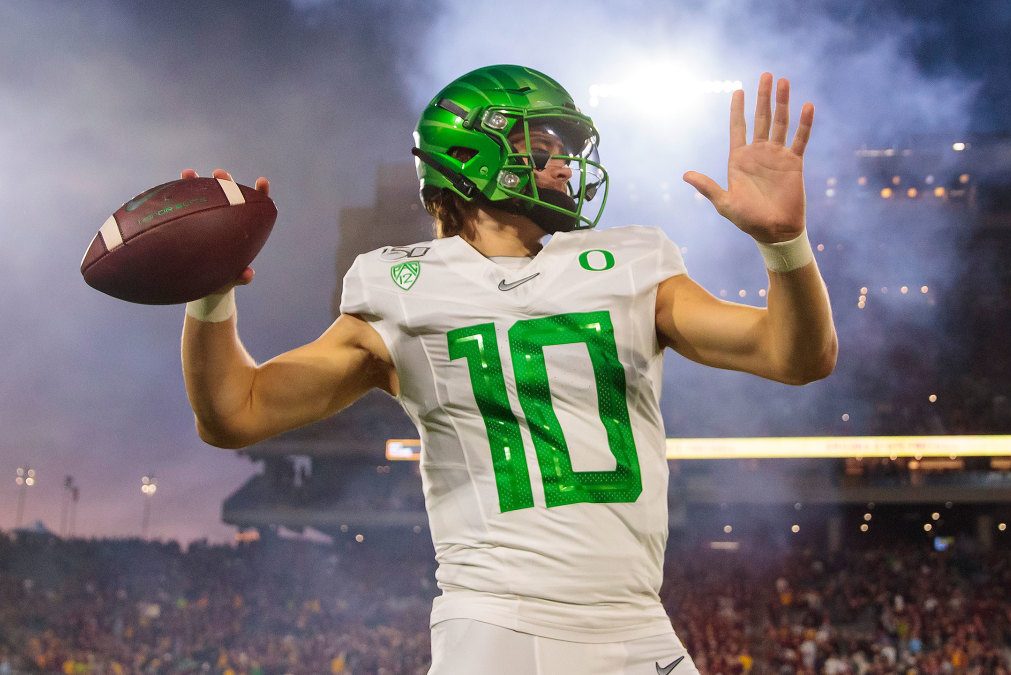 Justin Herbert is a senior quarterback out of Oregon. Herbert joined Oregon as a three-star prospect out of Eugene, Oregon. At Sheldon high school Herbert was a three-sport athlete, he played baseball, basketball, and football. Herbert suffered a fairly serious broken leg in his junior year in high school which complicated his college recruiting which led him to commit without a scholarship to his hometown college Oregon.

In 2016 he started as the second QB for the Ducks. After five games starting QB Dakota Prukop was struggling so badly head coach Mark Helfrich decided to play true freshman Justin Herbert. Herbert played as well as could be expected for a true freshman and even led the Ducks to an upset of #11 Utah.

Going into his sophomore season Herbert was looking to continue to improve on a good freshman season. Under new head coach Willie Taggart and a new offensive scheme “Gulf Coast Offense” Herbert led the Ducks to a 4-1 record before breaking his collarbone in week 5 against Cal. He would return to the team and help them win their last two games and become bowl eligible, where they would lose to Boise State.

Herbert entered his third season with his third head coach and new offensive scheme in as many years. Mario Cristobal became the head coach and brought a more spread offense to the Ducks. Herbert entered as a Heisman favorite and one of the top quarterbacks in college. While Herbert didn’t have an amazing season he likely would have been the first or second QB taken in the draft had he decided to come out he did finish with a PAC-12 All-Academic First-team.

Many were perplexed by Herbert’s decision to come back to school. The rumors were he wanted to play with his brother, while others said he had gotten good advice and could improve his draft stock. While he put up impressive numbers again, Herbert struggled in big spots and continued to show some inconsistencies analysts were hoping he would improve on. He would end up in the Rose Bowl and win the Offensive MVP award. Herbert was also named the 30th recipient of The William V. Cambell Trophy, a trophy considered as the “Academic Heisman.” Herbert would also leave college with a major in General Science.

As you can see from the table above, these stats continue to show the conundrum that is Herbert. Good stats but inconsistent play. While a decent overall grade, Herbert showed he could throw very accurate deep and intermediate throws.

Herbert showed in certain aspects of the game he could produce at an elite level. So why do some of his numbers look, pedestrian? Some say it was the offensive scheme or the talent around him. While others will say it was the inconsistent play of Herbert himself.

Herbert while not in an air raid offense did a good job throwing to deep and intermediate parts of the field. Interestingly he seemed to struggle the most when throwing to the short areas of the field. So what are the strengths that Herbert brings to an NFL team?

All stats courtesy of https://www.pff.com/

Herbert has elite arm talent and especially when he is afforded time in the pocket can throw lasers anywhere on the field. His ability to put the ball with pace in a place for his WR, in my opinion, is the best in this class.

Herbert can place the ball with pinpoint accuracy. When given time in the pocket he excels at this. This is no an easy throw to put it over the defender in stride with his WR, throwing from the opposite hash on the field.

Extending Plays and Passing on the run

Herbert consistently will move around in the pocket with pressure to extend the play. His ability to throw on the run is a bit underrated. It’s something that wasn’t asked of him much in Oregon’s offense, but something he can do that gives him an advantage.

The last of his three rushing touchdowns against Wisconsin in the Rose Bowl is a thing of beauty. He reads the play perfectly and takes off. Love the stiff arm and he shows what he can do with his legs. He isn’t as mobile as a Cam Newton or Lamar Jackson, but I do think he can use his legs effectively in the right offense in the NFL.

For all of Herbert’s strengths, he does show some weaknesses in his game. The easiest one to discuss is durability. He has suffered two serious injuries in his career but has remained healthy for the last two seasons. So while it is a spot on his record I do think this is minimal. The biggest weakness of Herbert is his inconsistency. When you watch him play one week he will look like the best QB in the class, then next week he looks lost and struggles to produce. Some of that comes from him struggling against pressure (though most QB’s do.) The other issue comes from Herbert tending to stare down WR’s at times. I am one of the analysts who believe part of this was the offensive scheme though. Regardless this is something that will need to be improved upon as NFL safeties and cornerbacks will feast on him if he doesn’t look them off and stares down his targets, regardless of how good his arm is.

Herbert comes into the draft with some question marks but a ton of upside. In fact, had Tua stayed healthy I believe his upside could be argued to be on the same level as Tua. Herbert has elite arm strength and is an athletic specimen. He can beat you with his legs and his arm and has the best arm talent in this class. He also is extremely smart left college with a 4.08 GPA and is considered a very smart football mind as well. Wherever he goes in the NFL he’ll need to work on some of his inconsistencies, but if he does he could be talked about as the best QB of this group. What team in the NFL will take Herbert?

Herbert is my number two quarterback of this class right now behind Burrow. Many mock drafts have Herbert going to the Los Angeles Chargers right now and I do believe that could be a great fit. I do think Herbert can go and learn from Tyrod and play in a great offensive fit for him. Anthony Lynn was part of the offense when Tyrod was in Buffalo. Shane Steichen the O.C. who’s from the Norv Turner coaching tree I think would help run an offense designed for Herbert’s strengths. If he isn’t drafted by the Chargers I could also see him getting drafted by these teams as well MIA, IND, CAR, and TBB. I don’t see Herbert falling to TBB at 16 though. If he does fall to any of these teams I think all could be great fits especially Carolina with Miami being the worst fit.

Fantasy wise I think Herbert will be good wherever he goes. He likely will be the second or third QB taken in the NFL and your fantasy drafts. Yet I still believe he has the chance to be the best QB in this class because of his upside and his legs. In a super flex league, he should be taken in the top three picks. With as deep as this class is at the skill positions unless you need a QB he should be someone you can steal in the third round.

That completes the Justin Herbert draft profile. Continue to check back as new profiles will be released every couple of days. If you want to see more of my work you can find me on twitter @SportsfanaticMB and on my podcast Fantasy Football Roundtable, where we will be discussing all the hot off-season topics and prospects.