KJ Osborn seems to have come from out of nowhere to add some kick to the Vikings WR3 role. @tweetsbychad takes a look to see if
Osborn is here to stay. 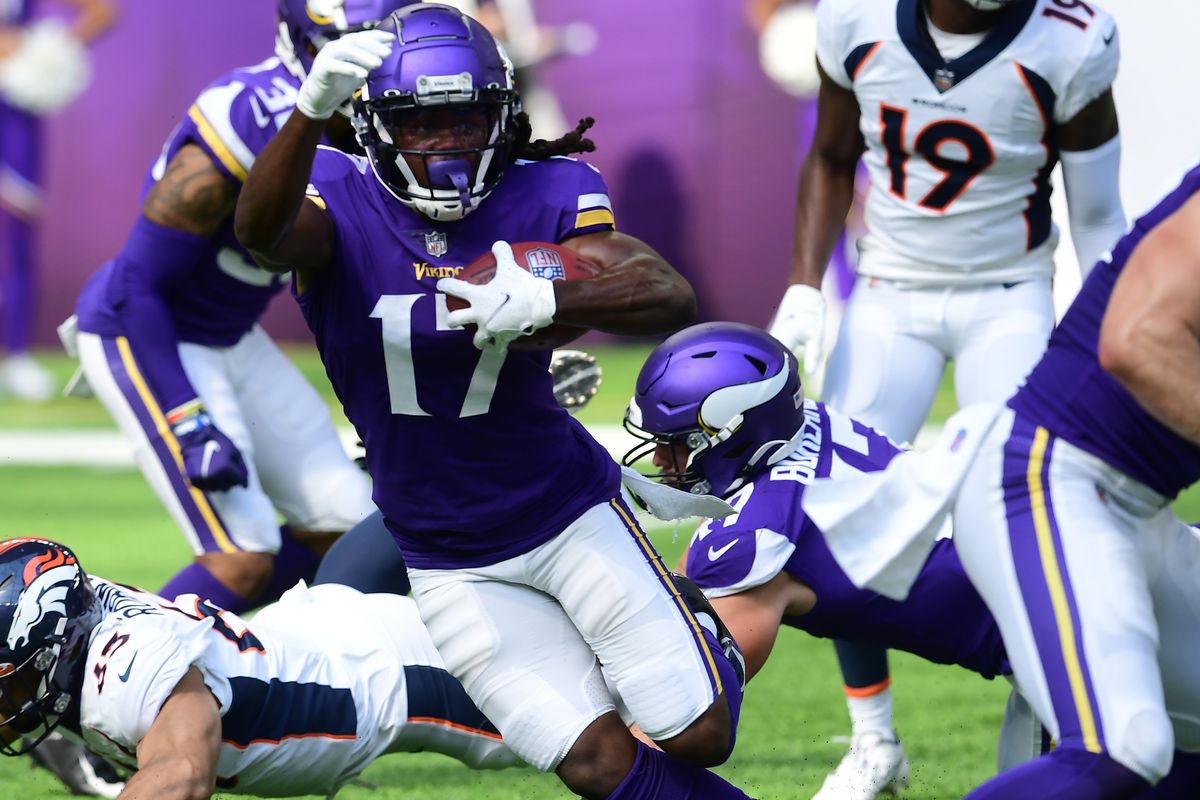 The leading receiver for the Minnesota Vikings through two weeks is not their superstar wide reiver drafted in the first round last year. It is not the two-time pro bowler Adam Thielen either, though he does lead in touchdowns. Instead, the leader in receiving yards for the Vikings is the second-year pro out of Miami, K.J. Osborn. Osborn has caught 12 of his 15 targets for 167 yards and a touchdown.

You’re probably wondering who that is and if his fast start to the season can be continued. The fifth-round pick played in nine games last year but was deployed only as a kick and punt returner, so we don’t have much to go on with Osborn. The analytics would tell you that Osborn is not a great prospect, as his college production was limited, and his metrics are average or slightly above. He had a late breakout age, and his college dominator was in just the 30th percentile, while his college YPR was in the 37th percentile.

Osborn was just a two-star recruit when he committed to play for Buffalo. After redshirting his freshman year, Osborn played in the MAC for three years before transferring to Miami (FL) for his senior season. In his best season, Osborn recorded 892 yards and seven touchdowns for the Bulls his junior year before wrapping up his collegiate career with 547 yards and five touchdowns with the Canes.

With his lack of college production, most projections had Osborn going undrafted, but that didn’t stop Rick Spielman and the Vikings from selecting him with the 31st pick of the fifth round. He played primarily out of the slot at Buffalo but was used more out wide for Miami. The Vikings seem to agree with Buffalo, as he has lined up in the slot 70.5% of the time this season.

A home in the north

Osborn played 81% of the team’s snaps in week one but dipped to 59% in week two. It is worth noting that the team ran far more plays and ran the ball much more in week two. Even with the dip, he still played an impressive 71% of the team’s snaps and has run a route on 78 of 87 dropbacks. So, most of his time spent on the sidelines has been the Dalvin Cook show on the field. In addition, Dede Westbrook returned to action in week two but saw just two snaps, a clear indication that he is not a threat to Osborn’s usage at this time.

Most projections didn’t even have Osborn as the team’s WR3, but even if they did, nobody would have had him receiving an 18.2% target share over the first two games. His 15 targets trail Thielen by just two and Jefferson by four. Irv Smith being out has helped aid Osborn’s usage, but the tight ends have still received 10 targets while Dalvin Cook has also received 10. The base package for the Vikings this season has been 11 personnel, and the team is running three-wide receiver sets at one of the highest clips in the league. The question is, are the Vikings running more three-wide sets because they want Osborn on the field, or is his success a product of the team playing this way more often? The answer: it doesn’t really matter, though my money is on the former. The bottom line is that he has been given the opportunities and is producing, so it’s unlikely to change going forward.

Osborn’s 13.9 YPR is certainly a bit inflated by his 64-yard touchdown catch on Sunday, but making big plays is never a bad thing. Even if his pace is unsustainable, his 7.67 average depth of target and 2.35 yards per route run are not.

Despite all the positivity, there are still questions remaining. We haven’t yet seen a huge game from Jefferson or Thielen, so there is room for regression when those two get going. After all, Osborn hasn’t seen a single red zone target to this point, and his 11.13 yards per route run is obviously unsustainable. Most believed that Westbrook would snag the Vikings WR3 job, so it’s possible that the team ramps up his usage in the coming weeks, but considering he played just two snaps on Sunday, that seems unlikely.

The stats and usage rates all look nice, but can the kid play? PFF thinks so as he has a 74.2 receiving grade for the first two weeks of action. This is higher than his teammates, Jefferson and Thielen, and is good enough for 25th best in the NFL. And if you remove players who have seen just five targets or less, he jumps up to 20th.

What does the staff think?

The coaching staff clearly thinks he can play, awarding him with the surprising usage the past two weeks. In addition, both Head Coach Mike Zimmer and GM Rick Spielman mentioned Osborn as a camp standout. Offensive Coordinator Klint Kubiak produced multiple quotes about Osborn’s intelligence, versatility, and improvement. However, it was what Miami’s director of recruiting, Dave Cooney, told Dane Mizutani of the Pioneer Press that stood out to me.

“I don’t know a kid that’s going to outwork him,” Cooney said. “I remember the minute he stepped foot on campus before he even moved into his dorm room or anything like that, he asked for the tennis ball machine so he could work on his hand-eye coordination. That’s who he is.

“The jump that he’s made from Year 1 to Year 2 in the NFL isn’t surprising to me. I think there will be another jump from Year 2 to Year 3 and then from Year 3 to Year 4 and so on. Just because of how hard he works, how much he loves the game.”

Cooney also spoke about Osborn’s impressive film, like the ball sticking to his hands like glue and making the first defender miss. A lot can be learned from what other people say about someone, and Osborn has earned the highest remarks in that regard.

While we can’t expect Osborn to keep up the 1,419 receiving yard pace he’s on. We should expect him to continue to be fantasy-relevant this season. His usage and play indicate as much, but Adam Thielen is also 31 years old and has missed time the past two seasons. Osborn is ready to slide into a larger role in case of injury or potentially take the reins as the Vikings long-term WR2. He’s more than worth a roster spot this season as a WR4/5 but has long-term appeal in this offense too.