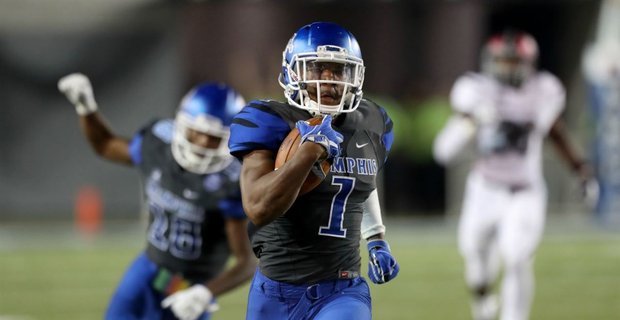 Before digging in, I would like to thank fellow Dynasty Nerds writer Jon Diment (@DynastyJon) for giving me the inspiration to write this article. He wrote an amazing piece on “The Memphis Workhorse” Darrell Henderson, and after reading it I dug through Memphis’ roster to see if any other declared players were worth a look. Well, I found one, so get ready for this year’s Alvin Kamara, Tony Pollard. (Here is Jon’s article, make sure you read it and slide Henderson up your draft board ASAP!

I want to first start by looking at the measurements of both players. Pollard measures in at 6’0” and 208 LBS while Kamara measures in at 5’10” and 215 LBS. We can see from his NFL experience that Kamara can run between the tackles with his frame when called to, but can Pollard do so at the next level? He has the size but should add some weight to his frame if he is going to be a consistent ball carrier. Let’s take a look at both player’s college statistics:

The biggest comparison statistic wise is the rushing averages, with both players averaging over 6 yards per carry. Where these two players separate, in my opinion, is receiving, with Pollard averaging 12.4 yards per reception to Kamara’s 9.2. This may surprise some as Kamara has been known in the NFL more for his receiving over his rushing ability, although that looks to change if Mark Ingram leaves the Saints in Free Agency.

Another similarity between the two players are the ability to return kicks and punts, although Pollard was primarily used as a kick returner. Here are their return statistics and Kamara’s NFL return statistics.

What amazes me the most is that Pollard averaged 30.1 yards per kick return, which is a massive number, while scoring 7 return touchdowns. Oddly enough, while at Tennessee, Kamara was used primarily as a punt returner and has been switched to primarily a kick returner in the NFL. Either way, both players have been productive in the return game.

At the Senior Bowl, Tony Pollard only had 1 kick return for 16 yards, but led the North Squad with 89 total scrimmage yards. Surprisingly, he only totaled 13 yards on 2 catches (4 targets), but many passes thrown his way were errant. When he did catch the ball, he was very fluid after the catch and easily made defenders miss. On the ground, he had 60 yards on 8 carries with 1 touchdown, and had great burst through first and second line defenders. He was the best runner on the field for the North Squad this year as Notre Dame product Dexter Williams looked mediocre averaging only 3.5 yards per carry on 11 carries.

Both players have many similarities, but if Pollard is drafted into the right team (Kansas City, pay attention), he can be an instant number 2 running back and huge dynasty asset. At this point I can’t say his will be better than Kamara, but given a chance in the right situation he certainly has a shot to be something great for many years to come.