Kareem Hunt; What is Dead May Never Die

In today’s Value Based Players series @TripleDFFP examines the Browns backfield! Check out this in-depth analysis of the pit falls and challenges of Kareem Hunt’s career that should have killed his fantasy value and how he has returned to a “must own” for your fantasy roster! 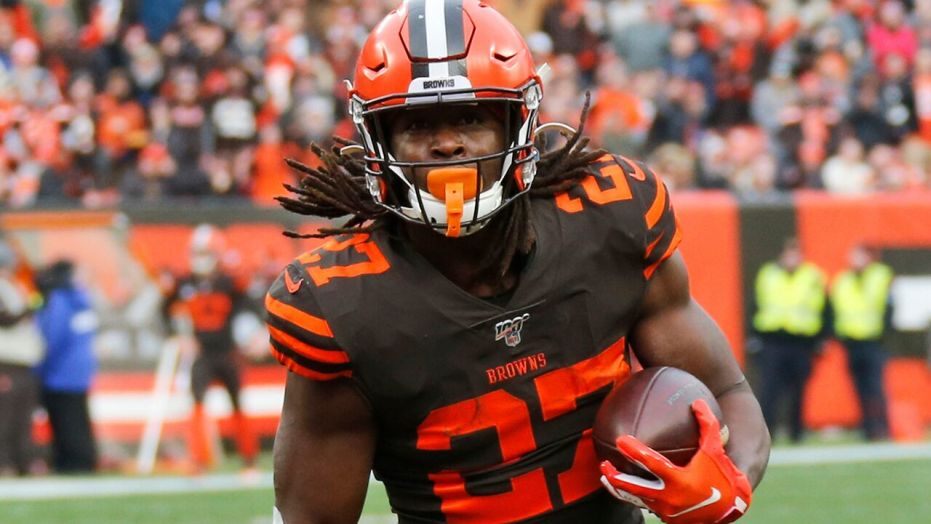 As a Kansas City Chiefs fan, there is a special place in my heart for Kareem Hunt. He was the first new jersey I bought for myself since Tony Gonzalez, a tough act to follow. Yet, follow he did, with an awe-inspiring rookie season. Leading into his Sophomore year, I was hyped about this kid. Mahomes was taking the reins, Hunt was in the backfield, and Hill and Kelce were dominant on the outside… All was right with the world. Then came the dark days. When Hunt was released from KC, my heart hurt (actions aside), and I thought he would be dead in the league. But as the Iron Island’s have taught me, “What is dead may never die,” and Kareem Hunt has certainly not yet died.

He is, however, buried. Buried behind one of the purest runners in the NFL, Nick Chubb. A position that would execute the fantasy value of any other running back, yet Hunt managed to force relevance in ‘19. A season where, after an eight-game layoff, Hunt returned to the field and impressed, yet again. His first game back, he tallied 77 all-purpose yards, a week that also saw Nick Chubb rush for 116 yards… So what does that tell us? It tells us that these two can co-exist. Hunt can’t be killed.

So when looking towards the ’20 season, there are a lot of question marks surrounding his production. How will he produce fantasy relevance with Chubb as the alpha? How will the changes in the OL affect the running game as a whole? Will the newly anointed Head Coach, Kevin Stefanski, play favorably into Hunt’s hand? Let’s dive into all those questions in this installment of our Value Based Players — Teams A-Z series.

We’ll start with a refresher of Hunt’s capabilities. Dynasty is a game of “what have you done for me lately.” While Kareem has still shown production as of late, some may have forgotten just how exceptional he has been.

In 2017, his rookie season, he was thrust into the spotlight after a Spencer Ware offseason injury. In his first NFL game, he absolutely pummeled the New England defense, racking up 246 all-purpose yards for three touchdowns. The kid had arrived. That season was all gas, no breaks for the young ball carrier, which eventually saw him earn the Pro Football Writers of America NFL Rookie of the Year award.

The conclusion of the ‘17 season then saw Hunt jettisoned to the top of Dynasty Startup rankings. He was one of the most exciting prospects in the NFL, and he did not disappoint through the first 11 games of the ‘18 season. He was on pace for 1,748 all-purpose yards and 20… That’s right, 20 TDs. Unfortunately, Hunt was not able to reach those projections due to his suspension for off-field misconduct. Said suspension and subsequent release from the Kansas City Chiefs should have been the judge, jury, and executioner for Kareem’s dynasty value, yet he survived.

He signed with the Cleveland Browns in February of 2019 for a 1 yr/$1 mil contract to eke out a redemption story post-suspension. He did just that. During his eight games that season, he accumulated 464 all-purpose yards. An impressive feat that earned him a one yr/$3.23 mil contract. Hunt’s usage was not sufficient for a player of his caliber, though, which is more a reflection on former HC, Freddie Kitchens, rather than Kareem’s play. That shouldn’t be an issue under new HC, Kevin Stefanski. Stefanski, the former Vikings OC, is the new sheriff in town, and if he’s brought anything with him to Cleveland, it’s a desire to establish the run. His ‘19 season with the Vikings saw their RB’s average 30 touches per game with Dalvin Cook, Alexander Mattison, and company. A lofty number which tells us something about the possible usage in ‘20.

Hunt’s eleven touches per game isn’t a significant increase from his 10 per game through 8 games in ’19. So why expect more from him this season? Because

Stefanski is coming from an offensive playbook schemed for a player of Dalvin Cook and Kareem Hunt’s skills. That’s not to discount Nick Chubb’s ability in any aspect of the game, but Kareem is simply on a different level in the passing realm. I believe that Hunt’s weekly touches will be closer to 13 per game due to his play style and Stefanski’s history. If that comes to fruition, things are going to get weird, SO STAY WITH ME… In games where both Hunt and Chubb played, Hunt produced 1.03 fantasy points per touch to Chubb’s .64. Assuming, at minimum, they have the distribution of 19 touches (Chubb) to 11 touches (Hunt) that I previously broke down, using the same fantasy points per touch from last season, Hunt would finish the year with only 13.28 fewer fantasy points than Nick Chubb. If he hits 13? He’ll theoretically outscore Chubb. Let that sink in… Hunt definitely ain’t dead.

It’s an unsettling concept to stomach… I know. As a Chubb owner, when I broke it down, it didn’t feel right. The numbers don’t lie, though. I think that 181 fantasy points in ½ pt scoring is Hunt’s floor, which would have been RB19 last season. He is currently being drafted as the RB27 according to FFPC ADP… That’s value.

While that IS my floor prediction for Hunt, it’s not my projection for Chubb (which is for another article). This is a pro-Hunt article, not an anti-Chubb one. So it is important to remember that the Browns added Jack Conklin from the Titans and drafted Jedrick Wills Jr. with the number 10 overall pick. PFF has them ranked as the 6th best offensive line in the league, which should equate out to more red-zone efficiency, inevitably increasing Chubb’s fantasy points per touch, which was significantly damaged by his inability to make it to the end zone in ‘19. That increase in efficiency isn’t limited to Chubb, though. Hunt will benefit equally from these additions. This season, accompanied by a healthy OBJ, should mean gashing lanes for both of the runners in this tandem.

And finally, let’s talk about his future beyond ’20. Hunt’s contract will expire with the Browns after the 2020 season, and he will find himself in a very cluttered FA pool. He will be competing with Dalvin Cook, Alvin Kamara, Aaron Jones, and Leonard Fournette for a contract. However, Hunt has something going for him that these other players (Fournette excluded) don’t… He HAS to be cheaper than them. The mix of off-field issues and sub RB1 production make it so that he CAN’T command top tier pay, which, in my opinion, will make him a more desirable candidate. You tell me? If you could secure a talent comparable to the field of options for a lower price, would you not jump at the chance? Exactly. Therefore, I believe that Hunt will have his pick of the litter when finding a home for the ’21 season. A great sign for things to come and a chance to truly rise from the ashes.

So, where does that leave us with Hunt? Well, in redraft, he is a player that I absolutely can’t leave the draft without. I believe he has immense stand-alone value with a floor of RB19 and a ceiling that’s as high as Stefanski wants it to be. You can draft him as your RB4 today with an RB2 floor. In dynasty? He’s also a must-own. Right now might be the lowest value Hunt will ever have. He hasn’t produced “flashy” numbers in over a year and is seen as a “backup” right now. I’m looking to trade for him everywhere I can, and I’d be willing to give up a late ’21 1st to get it done. If you don’t capitalize now, then there’s a good chance that the price point will skyrocket with solid in-season play and a possible new home in ’21. Trade for him now with the valuation of RB27 on most drafter’s minds, and you may find yourself with an Iron Island’s approved top 10 RB in 2021.

Find me on Twitter @TripleDFFP. Have you tried the new DynastyGM tool? For just $2.99/month you can see how your team stacks against your leaguemates, see who would be a good trade partner, and much more.