Injuries have granted opportunity to young running backs. It may be time to pivot. 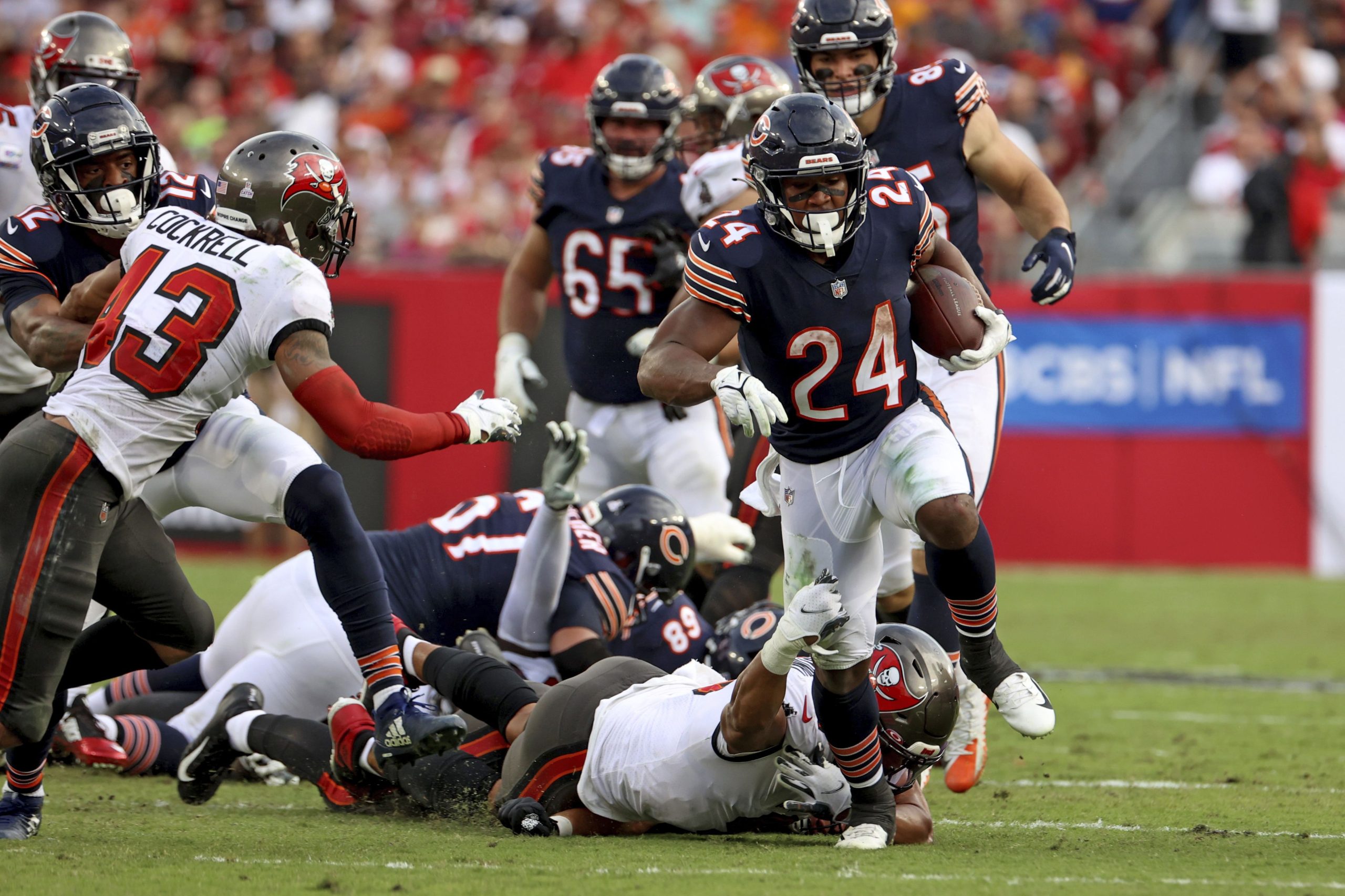 The battle of attrition is well underway for fantasy managers. Week seven’s “Byemageddon” is safely in the rearview, but injuries continue to limit the depth and production of this season’s presumed top runners. Recent injuries to Miles Sanders and Josh Jacobs add to a growing list of running backs forced to miss time.

There is no glory in rooting for injuries. They do, however, give us an unexpected opportunity to evaluate second and third-string players. These players are typically young, relatively unknown entities selected beyond the premium picks in our rookie and startup drafts. In shallower formats, managers may have acquired them via league waivers. Due to this low cost of acquisition and the unproven nature of this subset of players, they can represent significant value discrepancies in dynasty trading.

That said, let’s play a game of “Keep, Trade, Cut” with some of the ascending running backs in dynasty value. It should go without saying that any of these players could be kept, traded, or cut depending on your roster and the price you can negotiate. This exercise aims to indicate the level of urgency dynasty managers should have when considering trading with or for these assets. Using the DynastyGM tool, I will give examples of trades we’ve seen take place over the last couple of weeks and what you can expect to pay moving forward.

There is no rookie runner ascending faster than Khalil Herbert. Just ask the Bears. In the week leading up to Herbert’s stellar performance against the vaunted Buccaneers, news surfaced that the former Hokie and Jayhawk RB had surpassed Damien Williams on the depth chart. Both Herbert’s usage and performance in recent weeks confirm that report. Herbert has 18+ carries in three straight games and has amassed 272 rushing yards over that span. Yet, the trade market for Herbert is lower than I expected.

Recent deals include one-for-one exchanges of Herbert for NFC North counterpart AJ Dillon or fellow rookie Nico Collins. In rookie picks, the going rate for Herbert seems to be the third round of rookie drafts. However, there were a couple of deals with a second-rounder sent to acquire the talented Bears runner.

My best guess on the depressed price is the impending return of David Montgomery.  Before hyperextending his knee in Week 4, Monty was on track to reward managers who believed his strong finish to last season was more than just scheduling luck.  The Bears and dynasty managers haven’t forgotten that. I expect Montgomery will regain a significant portion of his previous workload when healthy.  So why not sell Herbert?

The game film is too good. While thriving under a lead role and heavy workload now, I see Herbert as a high-efficiency player as well. He has shown physical tools not possessed by a healthy Montgomery.
Additionally, the Bears offense is performing near its floor so far in 2021. As we see maturation from rookie QB Justin Fields, combined with a coaching staff learning to utilize his skillset best, we should expect the ecosystem around any Bears runner to improve over the next 18 months.

Khalil Herbert has the tools to be a Pollard-esque weapon in a better offense. I believe the best for Herbert and this Bears offense is still on the horizon. Elite handcuffs with standalone value are the bedrock of zero-RB and anchor-RB builds. Herbert squarely fits this billing. It would take a first-round pick to get me to part with Herbert in dynasty. Based on what I’m seeing, that isn’t going to be available in most cases. Hold with confidence.

The University of Memphis continues to churn out talented running backs. Gainwell is the most recent to see NFL success. More Darrell Henderson than Antonio Gibson, the perception is that Gainwell lacks the size to take on an NFL “bell-cow” workload.

Miles Sanders is now hurt. While the injury isn’t feared to be as severe as initially thought, there is a chance he will miss time. Because of this, there will be added incentive for managers to target Gainwell in the coming weeks. I don’t expect the offers will match his talent.

DynastyGM trade examples of Leonard Fournette or James Connor even-up for Gainwell indicate contending teams’ potential to pivot into more consistent production. The best price in rookie picks was the combination of a second and fifth-round pick for Gainwell.

I want to see this short-term lead-back audition before attempting to turn a profit. Gainwell has shown more power and decisiveness than I expected when running between the tackles despite a limited sample size. Soft matchups with the Lions and Chargers lie ahead in the next two weeks. Coupled with the fantasy community’s frustration with Sanders, there will be an opportunity to capitalize on Gainwell via trade. It just hasn’t come yet. Gainwell is a short-term hold with the potential for a rapid upswing in value over the next couple of weeks.

Despite supporting Elijah throughout the draft process and thrusting large amounts of FAAB capital into acquiring Mitchell, the time is now to sell. He exits Week 7, having matched Jonathan Taylor rush-for-rush in the atmospheric river in San Francisco on Sunday night. He fits the traditional Shanahan wide zone-run scheme. This has made him the preferred option in 2021 with Jimmy Garoppolo under center for the Niners.

However, rookie QB Trey Lance is looming, and the offense will and should change around him. While it may be a far reach to grant the assumption of rational coaching here, it is worth noting that rookie classmate Trey Sermon appears to be the better fit in a read-option and more power-based system. Wide-zone will always remain a prominent segment of the San Francisco playbook. However, a change-over or split backfield seems more likely in the future. Coupled with Shanahan’s willingness to change runners multiple times throughout the season at random, I believe the fantasy community has become too confident this is the workload we should continue expecting.

Some recent examples of deals featuring Mitchell in the GM tool should reinforce this notion. Elijah Mitchell and a 2022 first-round pick dealt away for Rashad Bateman. Mitchell was also traded straight-up for aforementioned teammate Trey Lance in a single-QB league. The best return I found involving rookie capital was Mitchell for a 2023 first and second-round pick.

All of these are deals are prices I’d happily accept for a late-round NFL draft selection that I acquired for little or no rookie draft capital. Yet, those same deals simultaneously feel attainable. Coming off a nationally televised game, the time is now to capitalize on Mitchell’s inflated value in dynasty. Target teams hurting at running back, and be aggressive. Non-contenders should target a 2023 first-round pick with a sweetener added on. Contending teams should be looking to combine Mitchell with another asset for a weekly upgrade in the starting lineup.

Another rookie granted an opportunity by injury, Chuba Hubbard, fits into the trade category. I’ve been impressed with Chuba’s fearlessness between the tackles. However, it’s becoming evident that succeeding behind this Carolina offensive line, and in this offense in general, isn’t as easy as Christian McCaffrey makes it look.

There isn’t a better option in Carolina’s backfield right now. There is also a growing level of concern surrounding CMC’s long-term viability. These factors are leading to some lopsided trades involving Hubbard. Chuba Hubbard was dealt this week for Chase Claypool. A first-round pick was added to Hubbard to acquire Jonathan Taylor. Finally, the standard going rate in rookie picks was a second and third-rounder.

After the week seven implosion of the Panthers offense, finding a manager motivated to acquire Hubbard may be more difficult. Still, as long as I don’t roster Christian McCaffrey, I’d be looking to turn a profit soon.

I take no pleasure in making D’Ernest the cut candidate. There are few players with as compelling and fun stories as D’Ernest Johnson, and his performance on Thursday night football was objectively fantastic. The Cleveland offensive line is good, and Denver’s defense was depleted, but D’Ernest consistently created yardage independent of blocking with a potent mix of cutting, power, and determination.

However, unlike the other backs contained within this column, we have a track record of D’Ernest looking tremendous and then fading back into the void. In week four of last season, after Nick Chubb and Kareem Hunt had succumbed to injury, Johnson performed similarly well against a dysfunctional Cowboys defense. Unfortunately, after 21 carries for 127 yards over two weeks against the Cowboys and Colts, Johnson was only given 11 more touches the rest of the season.

I don’t expect Johnson to fade into irrelevance this season entirely. Nick Chubb isn’t a lock to play in the upcoming week. Kareem Hunt is several weeks away from being ready to assume his role as the change-up. You shouldn’t be cutting D’Ernest until the Cleveland backfield is back to full strength, but when the list of players you can acquire via trade are available on waivers in many leagues, he personifies a cut. Recent DynastyGM trades include D’Ernest for a third and fourth-round pick and D’Ernest Johnson for Tyler Johnson or Devin Duvernay.

If looking to move D’Ernest, find a project WR that you value on a team with use for Johnson. Some examples beyond the two mentioned could include; Van Jefferson, Michael Gallup, KJ Osborn, Dyami Brown, or Jaelon Darden. Add a sweetener where necessary. The going rate of a third-round pick would also be more than enticing enough to move on from D’Ernest. There’s a small window here to churn value, and I recommend kicking a few tires.

Want my real advice? The DynastyGM is second to none in assisting managers with trading. Combined with the Dynasty Film Room and Trade Finder, a subscription to the #Nerdherd is the best edge in dynasty. Give yourself that edge!