Kelvin Harmon – Steal of the draft 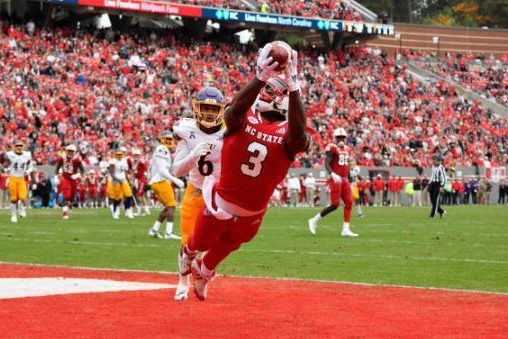 Kelvin Harmon was selected by the Washington Redskins in the sixth round of the 2019 NFL draft #206 overall. As I stood in attendance at the draft, watching Harmon slip round after round, I just kept thinking that some team will select the steal of the draft. This was a very deep wide receiver class with players that checked a lot of boxes for teams that had needs at the position. Let’s face it, Washington basically has Josh Doctson and Paul Richardson, and they are not the future for the Redskins at wide receiver.

After selecting their new franchise quarterback, Dwayne Haskins, the Redskins also selected wide receiver, Terry McLaurin. McLaurin was one of Haskins targets in 2018 as they both played for Ohio State. Bringing in that built-in chemistry is a smart move by the Redskins, but why would I be looking at Harmon instead of McLaurin? Why did Harmon slide down the board? Well…. Let me tell you.

The biggest knock on Kelvin Harmon is his speed and quickness which is pretty big at the wide receiver position. He ran a 4.60 40-yard dash and a 7.15 3 cone drill at the combine. So needless to say, he’s not the fastest or quickest which is why he slid. However, what he lacks there, he more than makes up for it in other aspects of the game.

Now let’s look at why I like Harmon. The former N.C. State wide receiver finished his college career with back to back 1,000-yard seasons. He finished his three-year career there with 177 receptions, 2,665 yards (15.1 average), and 16 touchdowns. In his Sophomore season, he had 69 catches, 1,017 yards, and 4 touchdowns. He then capped off his Junior season with 81 catches, 1,186 yards, and 7 touchdowns before declaring for the NFL draft.

Harmon is also a physical player standing 6’2” 221 pounds. He translates that size and strength to other aspects very well. He uses that strength to move DB’s whether he’s blocking or putting himself in position to make a play. He’s possibly the best blocker at the wide receiver position in this draft class.

Other traits that Harmon has, which makes him very effective, is that he has a high football IQ, great hands, and the fact that he can run every route in the route tree. For a guy that doesn’t have elite speed or quickness, he can still beat the defense at any level. Plays well inside or outside since he has a knack for finding soft spots in coverage along with using his size, hands, and ball tracking skills to make catches.

I want you to look at a few plays from the film that I watched on Harmon that displays these abilities.

The first play I want you to see is against Clemson. You can see Harmon is lined up on the outside (top of the screen). He gets a quick vertical push off the line gaining half of a step on the corner and turns his head towards Finley 5 yards out. Finley sees the safety sliding over in coverage, trusts Harmon, and throws it back shoulder. Harmon tracks the ball, uses his great hands and body control, to make the play.

Let’s stick with the Clemson game with this next play. Harmon is lined up outside again (bottom of the screen). Again, he gets vertical quickly. About 7 yards off the break he gives a jab to the outside and beats the corner up the seam. Finley stares down pressure, again shows trust in Harmon, and lets it fly for an N.C. State touchdown.

I love this touchdown catch against Notre Dame. Harmon is lined up inside and there is not much to explain other than the fact that Finley faces pressure, tosses up another ball to Harmon who displays his ball tracking skills here. His control and hands are impressive.

The last play I want to look at has Harmon lined up to the bottom of the screen against Marshall. He just runs a simple crossing route to the soft spot of the zone. Finley lets the ball get away from him a little bit here. However, Harmon shows his catch radius and great hands by plucking the ball out of the air and coming down with a big catch on 1st and 20.

These are a few of many plays that stood out to me. The guy can clearly play the game even though he doesn’t possess great speed. You can see, with the speed and quickness he has, Harmon still gets separation. Another fun thing to point out too is that if you watch Ryan Finley highlights, a very high percentage of his throws are to Harmon.

I believe Haskins will be a great fit with Kelvin Harmon. As the chemistry grows between the two, I believe the Redskins will have something special. Even though Harmon was drafted in the sixth round, I see him getting immediate opportunities and possibly make a case to be in the running for offensive rookie of the year.

I know that I will be targeting Kelvin Harmon in every dynasty draft this year regardless of format. Hopefully, after reading this and seeing the provided film, you can see how Kelvin Harmon could very well be the steal of the 2019 NFL draft. Follow me on Twitter and Instagram @sspac21