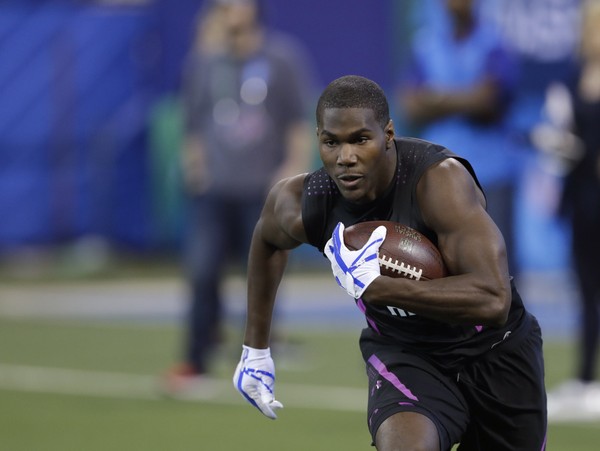 Kerryon is a running back I have been looking at a lot this offseason and have been moving him all over my running back rankings from 8th behind the likes of Rashaad penny, Ronald Jones II, and even Kalen Ballage. To finally settling with him as my fifth overall at the top of the third tier of running backs with Barkley being in the first then, Guice, Michel, and Chubb in the follow tier in no particular order (just yet). He’s a guy who has increased his touches and production every year since enrolling at Auburn in 2015 and after the combine really showed some of the skills that make guys productive at the next level.

As I mentioned Kerryon Johnson went to the NFL combine at the end of February and showed up at 71.5 inches (5’11.5) and 213 lbs so he has solid size we expect to see out of a running back and could easily put on a couple extra pounds to help take some of those blows. Has 9 ¾” hands to hopefully assist him in catching the ball at the next level and a 77 5/8” wingspan, both of which are larger than Kalen Ballage despite being 2 inches shorter. He not the biggest guy, but has some fantastic tools that were on display at the combine. To get the bad out of the way his bench press at only 11 reps was a little weak especially when some critics say that he doesn’t have the power that can translate at the next level. With the average for running backs this year being 17 and that even being a little light historically it was a little disappointing but bench is just as much about technique as it is physical strength. His 3-cone was not bad it was 7.07s of course for running backs we like for guys to be under 7.00 so still not a huge knock just something to mention in fairness. On the other hand, his 20-yard shuttle at 4.29s was a pretty good time, but he did not run the 40-yard dash, so its hard to compare if that is a good time or not. His big positives were his explosiveness. A 40” vertical jump good to tie him for second best overall and third best when adjusting for weight. His broad jump at 126” was good for 3rd best amongst the participants from the RB class. He clearly showed he has the explosiveness to be a serviceable running back in the NFL. Hopefully, through pro days we will fill in some of the gaps Kerryon left up in the air and we will be able to more accurately project how he stacks up against the rest of the class.

At Auburn, he didn’t really have a big breakout until 2017. He ran for 1391 yards on the ground and caught 24 passes for 194 yards, for a total of 1585 yards from scrimmage and a total of 20, yes that’s TWENTY, total touchdowns just in his junior year. Through his collegiate career, he totaled just under 3000 yards from scrimmage and 34 touchdowns over those 3 years. He increased his number of carrier by over 100 year over year, his yardage by over 500 year over year and touchdowns by at least 7 year over year. His growth as a player by forcing an increased workload while still producing at a high level is impressive. He has a career 4.8 yards per carry while averaging 4.9 yards per carry his final two years being very consistent on that front. He was named the 2017 SEC offensive player of the year for his fantastic 2017 yet he is still not getting the respect he deserves in my opinion.

As for his skill set he’s just a guy who I see being very stable at the next level. When comparing him to other prospects he’s a guy who is above average across the board, I wouldn’t say he has any particular weakness he just isn’t necessarily elite at anything either. He’s got great balance and can maneuver his way in tight spaces with good vision to watch plays develop. That explosiveness is visible on tape as he frequently pushes piles, breaks arm tackles and has a solid stiff arm he uses to really abuse opponents at times.

Kerryon Johnson might be the most aptly named prospect at his position in the history of the position. Agility. Transitions from avoidance to aggression. Fluid. pic.twitter.com/hhK9ffN18i

As you can see he isn’t someone who tries to do too much, and this is obviously just one clip but this is the type of power he can display at times. The key here is it looked like he had very little, bounced off a tackle showing his balance through the hole and had the body control to finish the following two defenders off with a stiff arm. He’s a runner who really takes what he is given and landing spot will be key for him. What you’ll see on tape is a guy who has a nose for the end zone and at minimum could be a touchdown-dependent option with three-down potential. With 54 career receptions in college, he’s shown he can do the little things like taking dump offs and short yardage passes to add to his potential value. He brings it every play and I think could be a serviceable option for any team as likely a 3rd or 4th round pick. The only unknown factor is his straight-line speed. On tape, he doesn’t blow you away but shows he can break away from SEC defenders who are arguably the most athletic amongst the power 5 conferences. Playing in the toughest division of college football Kerryon balled out and is going to be doing that for your fantasy teams next season.

He was a probably one of the most intriguing running backs on my radar coming into the combine and He still sits firmly at the #5 spot in my running back rankings. Where he will fit in overall in rookie drafts is hard to say. Assuming the top 7 of the 4 RBs and Big 3 WRs are gone first despite landing spot he could fall anywhere from 1.08 to 2.08 depending on where he lands because that tier is going to be huge and like most years very dependent on landing spot. I would say a conservative target would be 1.11 with definite room to move up. So for all those contenders looking for something to keep you contending definitely take a look at Kerryon Johnson.