Ke’Shawn Vaughn is one of the more controversial running backs in this class. So how much does @SportsfanaticMB like him? 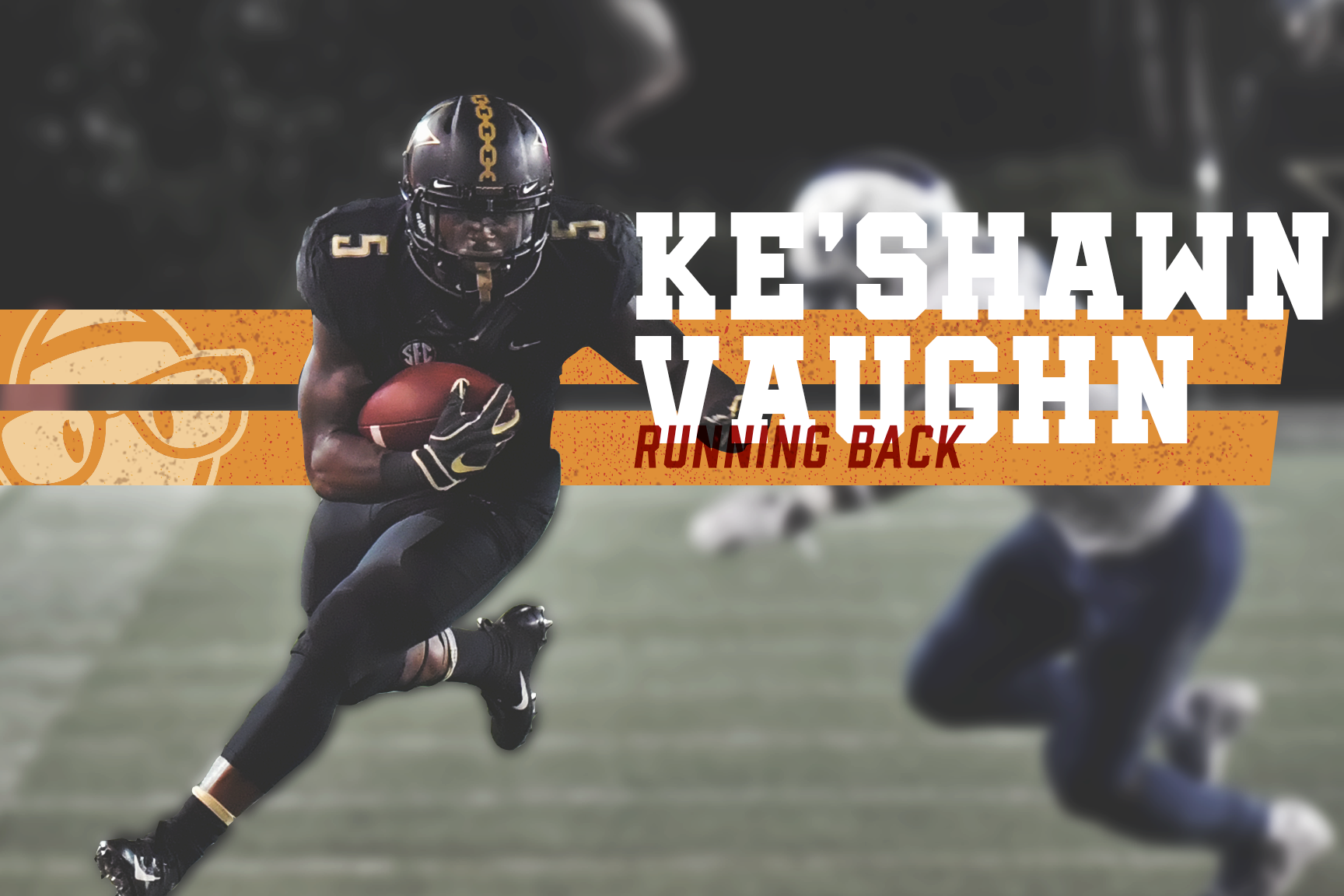 The Tale of the Tape

Ke’Shawn Vaughn is a redshirt senior running back out of Vanderbilt. Vaughn joined Illinois as a four-star prospect out of Nashville, Tennessee. In 2014 Vaughn was the best high school football player in the state of Tennessee, winning the Gatorade player of the year, 4A RB of the year, and the Tennessee Mr. Football award. While he was a football star he was also well known for being the star of his high school track team as well.

As a freshman, Vaughn shared the backfield at Illinois with senior Josh Ferguson. While Vaughn received more carries he barely out produced Ferguson. With the 2016 season approaching, Josh Ferguson entered the NFL draft and Vaughn looked poised to be an offensive weapon for the Fighting Illini.

However, 2016 did not go the way Vaughn planned. While he started the season as the starter for new head coach Lovie Smith, he eventually fell to the third option on the depth chart, behind Kendrick Foster and Reggie Corbin. Falling to the third option under a new head coach Vaughn decided to transfer out of Illinois. This was a big decision at the time as he was one of Illinois’ highest-rated recruits. Vaughn settled on transferring to Vanderbilt. As the transfer portal of now was not available and he was not a graduate transfer, Vaughn would have to sit out all of the 2017 season and return to football in 2018.

2018 started slow for Vaughn. After sitting out an entire year many were not sure what they had gotten in the transfer running back. However, once week eight came Vaughn would remind everyone how good he was. Against Arkansas, Vaughn put up 26-for-172 yards and three touchdowns. Vaughn would not look back after that performance and put up incredible numbers to finish out strong in 2018, moving into the discussion with the top running backs.

After deciding to return to school for his senior year Vaughn continued to produce as one of the top backs in college while remaining somewhat under the radar. While his rushing stats weren’t what they were in 2018 his uptick in receiving has increased interest in his NFL draft stock.

This table above highlights what Vaughn brought to the Vanderbilt offense. In Vaughn’s big play % he took 10 plays more than 20 yards, three of which resulted in touchdowns. Vaughn’s offensive stats courtesy of https://expandtheboxscore.com

Vaughn was used as a running back heavily in the first three quarters as you can see in the table above. His production dipped some in the fourth quarter mostly due to Vanderbilt being behind in most of their games and limiting Vaughn to getting mostly receiving work. Usage stats brought to you courtesy of https://expandtheboxscore.com

I love how quickly Vaughn attacks the hole in this clip and shows his quick backfield burst. He also gets stood up but continues to churn his legs and move toward the goal line. His leg strength is ridiculous and helps him in these tough runs.

I love this run by Vaughn. When he hits the first hole he immediately cuts upfield seeing a defender waiting for him. Once he breaks through Vaughn shows a quick change of direction without losing any speed, making the defender have to lunge for him. The burst to keep going all the way to the end zone with a defender right on his heels.

Vaughn has one of the nastiest stiff arms at the running back position. His contact balance is on full display in this clip as well, bouncing off defenders for a huge run.

Vaughn comes into the NFL draft with a few question marks for me. For starters, I feel he lacks a bit in pass blocking. While he can pick up an occasional rushing defender, many times I saw him just kind of throw his body at them instead of engaging the defender. I worry a bit about his discipline as he tends to bounce runs outside and look for the big play instead of taking what is blocked. I’d like to see more out of him as a receiver. While he improved at it his senior year, he was pulled off the field at times in key passing situations. He did hit a career-high in 16 catches his senior year, continuing to improve on that would be huge.

Vaughn is an underrated prospect that should be higher on people’s boards. He ranks right at the bottom of tier one for me with Cam Akers. He is quick to holes and shows good vision. Vaughn has elite contact balance. His ability to change direction without losing any speed and stiff-arm defenders into next week is amazing to watch. So where in the NFL draft could Vaughn go?

I have four running backs ranked over him. I imagine Vaughn will go somewhere on day two of the NFL draft in the third or fourth round. Teams I could see targeting him are Miami, Indianapolis, Tampa Bay, and Kansas City. Landing in any of these spots I think would secure Vaughn a chance to be an RB2 in fantasy. My favorite landing spots for him would be Tampa Bay and Kansas City. For now, I think Vaughn is more of a first and second-down back but does have a chance to become an every-down back if he can improve in the receiving game. Vaughn will likely be an RB you can grab in the second round of your rookie drafts, this would be a steal for me as I do think he has first-round value.

That completes the Ke’Shawn Vaughn draft profile. Continue to check back as new profiles will be released every couple of days. If you want to see more of my work you can find me on twitter @SportsfanaticMB and also on my podcast Fantasy Football Roundtable, where we will be discussing all the hot off-season topics and prospects.