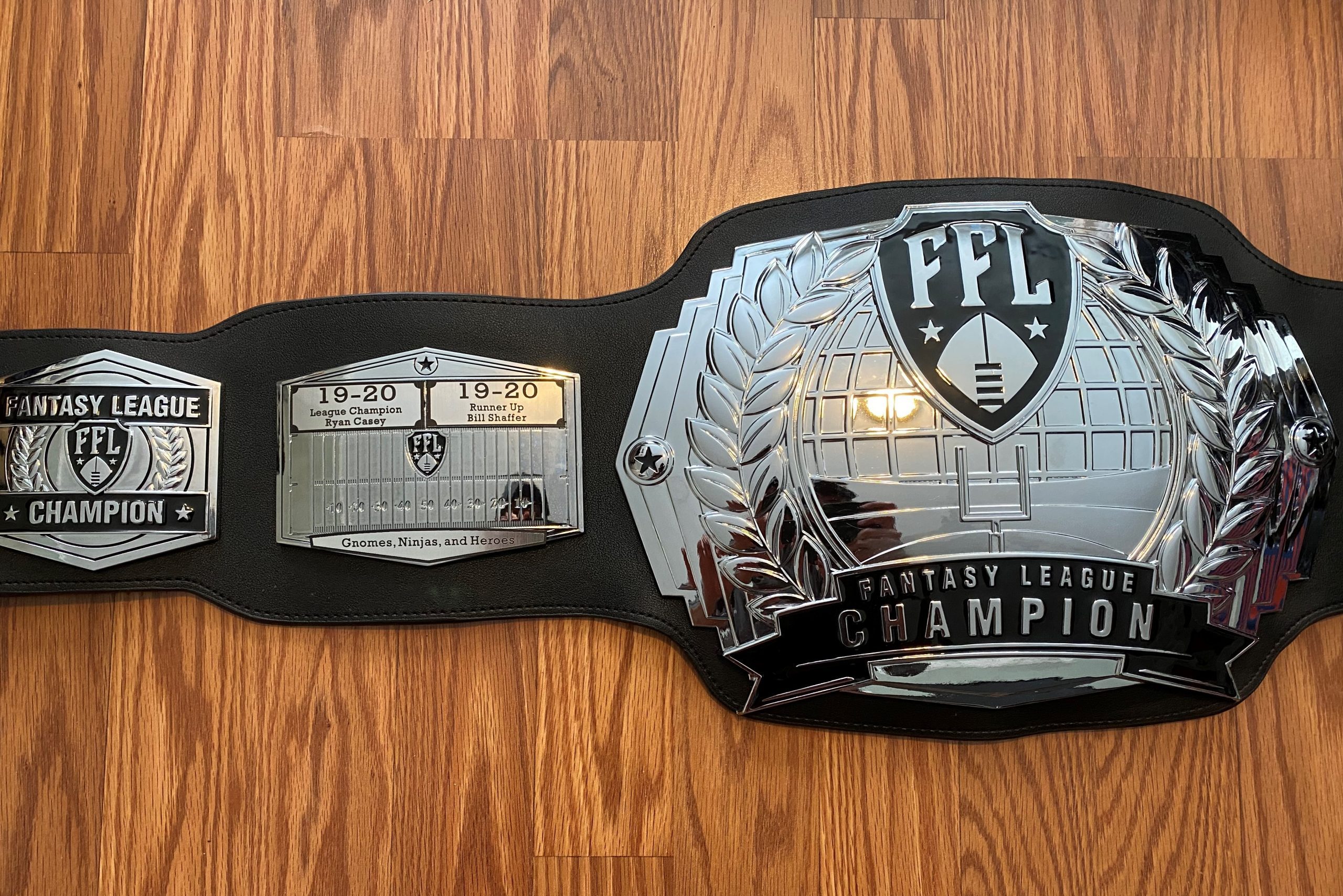 Everywhere you look, you see ADP, rankings, and “who should I take” questions. The Nerds are spitting out some real draft stories, that aren’t just numbers or averages. These are real drafts with real people and real teams. The rookie draft I’m going to fill you in on took place on May 2nd in my favorite league.

The League – Gnomes, Ninjas, and Heroes

The league itself is young, and I’m hoping it’s something a lot of readers can relate to. Formed in Summer 2019, this league brought together a collaboration of my friends and family. These aren’t Fantasy Football industry writers, and a lot of them are new to Dynasty all together. They’re all people I’m close to and have competed with in different outlets for decades. Knowing them well creates a great dynamic, and I urge everyone to take advantage of league-mate styles and preferences in these “Home Leagues.”

The format of the league is simple. It’s a 12 Team, PPR, FAAB league – starting 1 QB, 2 RB, 3 WR, 1 TE, and 2 W/R/T. The league is broken into three divisions that reunite rivals from prior leagues, where the top 2 teams from each division make the playoffs! The winner gets the belt above, from FantasyChamps.com!

Going into NFL Draft week, my team felt solid. Having finished 4th in 2019 (2nd in points for), I felt my team was a strong running back away from competing for a Championship.

As I mentioned above, knowing your league-mates is essential. Before the NFL draft, I started discussing the possibility of acquiring pick 1.02. The owner of the pick had acquired it via trade and had lost in the Championship last year. Having been in redraft leagues with this guy before, I knew he had a bit of a crush on all things Seahawks. He’d also sent me an offer for Deebo Samuel last season, and I planned on leveraging that. After a few days of deliberation, I acquired 1.02 and 3.11 for Chris Carson, Deebo Samuel, and Allen Lazard. In retrospect, it would’ve been smart to keep Lazard, but I believed that Packers were smart enough to get Rodgers some more help. My Draft Day roster (after cuts) is laid out below.

Before I enter a draft, I like to layout potential targets for each one of my picks. In the first three rounds, I try to stick to this. If it looks like none of my players will be there, that’s when I try to move up and get my guy!

The first round went just as planned. After Jonathan Taylor went first overall, adding Clyde Edwards-Helaire to my roster was a no-brainer! Giving my team a potential top 12 RB for years to come was a lock here. I considered Dobbins for a brief moment, as I knew the player behind me was a Ravens fan. If CEH weren’t there, I would’ve gone with Dobbins over Taylor or Swift just to hit him where it hurts. Don’t forget, we play this game for fun, and sometimes that’s at the expense of others!

At 1.09, I was hoping to pick up Cam Akers, Justin Jefferson, or Jalen Reagor. After Jefferson and Akers went the two picks before mine, I was happy to scoop up Raging Reagor and moved onto round two feeling good. While I hadn’t adequately address my running back concerns, Reagor’s talent was too hard to pass up.

At 2.05, my dream player was Michael Pittman Jr. I didn’t think he’d make it to me, and he didn’t. Edwards was the other wide receiver on my shortlist here, but Burrow was still slipping. The two picks before mine scooped up Burrow and Tua and left Bryan Edwards sitting there for me. I was thrilled to draft him over the likes of Moss, Evans, and Dillon. If Burrow had made it there, it would’ve been a much tougher decision. Late in the second, we saw an RB run, and at 2.12, I considered Antonio Gibson. I could still use some depth at the position, but the sweet feet of Van Jefferson called my name. I still had my eyes on a few third-round running backs that could have a serious role in the NFL, so I took a shot on Van.

Between 2.12 and 3.05, Gibson, Gandy-Golden, and 2 tight ends came off the board. This left me with my hardest decision yet. Two running backs I highly value were both sitting there for me. The debate between McFarland and Dallas wasn’t easy, but knowing my league-mates allowed me to make an educated guess. I doubted that either would fall to me at 3.11, but there was no way the more prominent name of Anthony McFarland would even have a chance to fall that far. Deejay Dallas still isn’t a household name, so I decided to spin the wheel and take Anthony McFarland, assuming my luck would run out. It didn’t. I managed to get McFarland AND Deejay Dallas in the third round, building my running back depth in the snap of a finger.

After regular-season transactions, I only had one pick in the 4th and 5th rounds. I had penciled in Isaiah Coulter at 4.09, as he fills a receiver profile Houston didn’t have. Once I was on the clock, I changed my mind and made a bit of a homer pick. Isaiah Coulter ended up going undrafted, so as long as this article publishes after the first round of waivers clear, I might get him anyway.

Now I want to remind everyone that it’s okay to have home-team allegiances, and it’s okay to act on them in Dynasty! We play this game for FUN, and this isn’t a huge buy-in league. Yes, I’m aware this guy might not make an NFL roster. I’m aware he wasn’t drafted in the NFL. I’m aware you’re little sister might be taller than this man, but that doesn’t matter. The tape on J.J. Taylor is electric, and James White is in the last year of his contract. I tried to move 4.09 for a later pick, but no one was biting, so I took my guy anyway. He might be a roster cut for the Patriots, and he might be for me as well, but for now, he’s a welcome addition to the back-end of my bench.

Going into the Season

Through the draft, I felt I was able to address a significant need for my team. Getting CEH, McFarland, and Dallas should help to stabilize my running back room. While I needed to address that need, I wasn’t reaching for backs that I don’t believe in. Taking Reagor over Vaughn might not fix my biggest problem, but he’s just the better player with the better upside. I continued to make this type of pick in the second round, as I felt the wide receivers available were much better values. In the third, the value switched, and I addressed my need. McFarland and Dallas were easy to take over Duvernay, Claypool, and Tyler Johnson, and now I feel far more comfortable with my running back depth and talent.

I’m hoping this team can make a run at the Championship in 2020. My biggest concern is the boom/bust nature of all my top Wide Receivers, and it looks like I may have fed into that narrative in the draft. We’ll see how things go, but if you want to follow along, you’ll see my major joys and sorrows on Twitter!