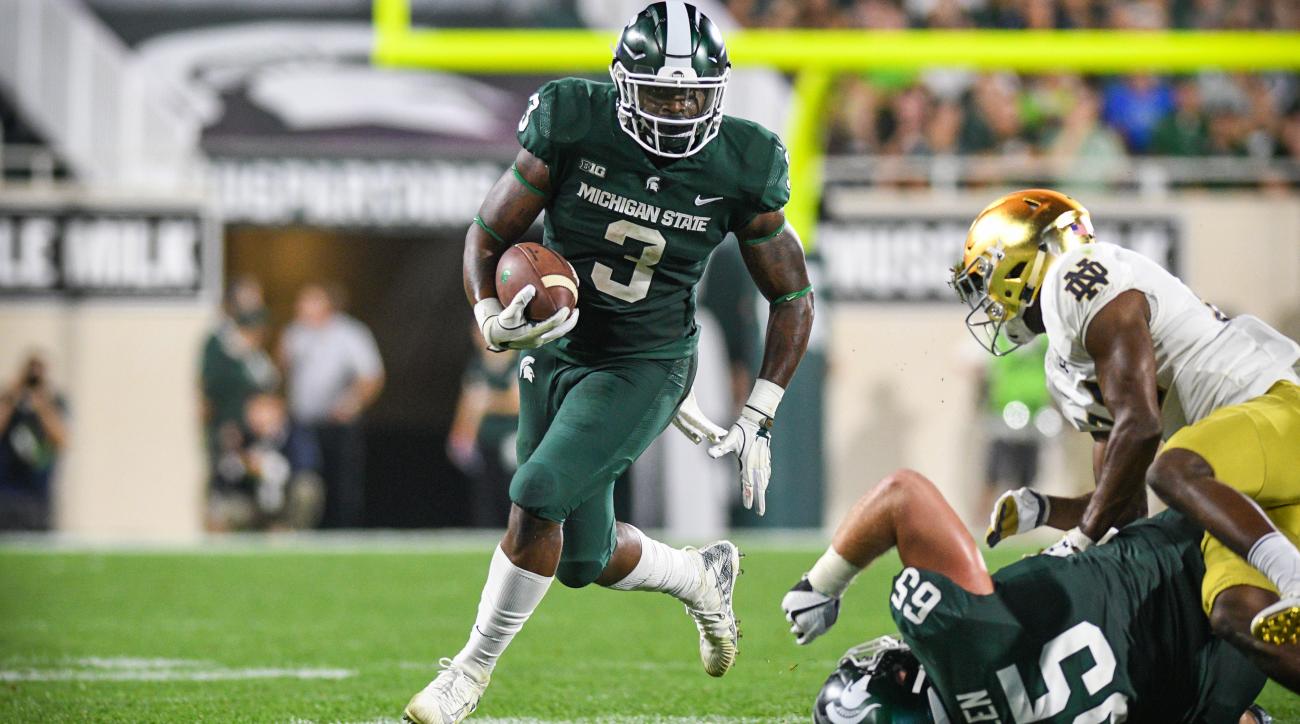 It’s that time of year again. Everyone gets excited wondering who will be this year’s steal of the draft. We delve deep into every guy entering the draft with the hopes of catching something no-one else will. As I’m sure you know by now, rookie evaluation is our forte here at Dynasty Nerds.

One of my early favorite dark horses in this year’s draft is LJ Scott from Michigan State. He’s not a household name such as Saquon Barkley, Derrius Guice, or Nick Chubb. You also likely won’t see him towards the top of the college rushing rankings. That’s because he was grossly underutilized by the Spartans and shared the backfield with Madre London and Gerald Holmes. Additionally, his QB Brian Lewerke would take off running far too often.

It’s widely believed that Scott will forgo his senior season and enter the draft after only 3 years. During those 3 seasons with the Spartans, he’s been quite consistent. A breakdown of his stats can be seen below:

Although he never exceeded 1,000 rushing yards (partly due to injuries in 2016 and 2017), Scott has a skillset that is highly desired by scouts. Walter Football ranks Scott as the 6th best RB in this class. They have noted that, “scouting sources who have been through the program have been impressed with Scott. They think that the 6-foot-1, 229-pounder is more than just a power back. They like his surprising speed and athletic ability to be more than a North-South runner. He’s patient and has feet that can make tacklers miss”.

Due to his size, it’s noted that Scott could become even more nimble if he sheds a little weight. This was a sentiment shared with LeVeon Bell at the same school prior to entering the NFL draft. Scott also has some ball security issues. And by “some”, I mean a lot. Fumbles have cursed him all season and have been a big issue. As such, the team forced him to carry a football with him around campus at all times.

Early in the process Scott’s core strength appears to fall in the red-zone where he’s shown a proven ability to score TDs. Something which is lacking for teams like the Detroit Lions. However, his physical stature and speed will certainly give him an opportunity for feature back work at the next level.

Scott will play in the Holiday Bowl on December 28th, after which he’ll make a final decision on his future. Seeing as reports truly vary on his stock, there’s no guarantee he declares. Draft Analysts’ Tony Pauline ranks Scott as a 5th rounder, while others rank him as a 2nd rounder. This uncertainty in a strong RB class may force him to play his final year.

But if he ultimately choses to take his talents to the next level, keep an eye on Scott in the draft process. He’s sure to be a polarizing figure, which could cause him to be a draft day steal.