Logan Thomas: No Flash in the Pan

Is Logan Thomas the answer to your tight end conundrum? @OMalthealleycat lays out the case for Thomas. 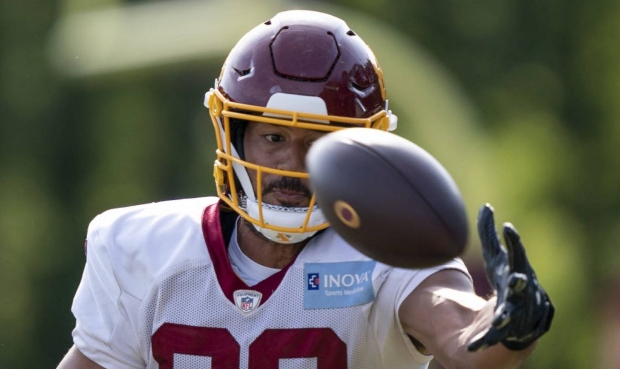 NFL Free Agency is winding down. If you are a fan of a football team, odds are you have a take on how your team is either killing it with their signings or running the franchise into the ground. If you are a fan of “THE Football Team,” as in the Washington Football Team, you might be having a more hopeful off-season than most. When Ryan Fitzpatrick signed with Washington, my eyes almost popped out of their sockets. My immediate thoughts of how he and Terry McLaurin have a chance to be one of the most dynamic duos in the league. I began pondering how the distribution of dump-offs will shape their running back duo of Antonio Gibson and J.D. McKissic. Even their new signing of Curtis Samuel, who is fresh off a 77 reception and 851-yard campaign (profootballreference.com), is bound to make this offense more explosive. None of the pieces in this offense is more fascinating to me than the 29-year-old tight end Logan Thomas.

Growing up in Lynchburg, Virginia, Logan thought he was going to be a wide receiver. He would play multiple positions at Brookville High School, including quarterback, wide receiver, and defensive back. Under head coach Jeff Woody he was named the Associated Press Group AA Player of the Year in Virginia. Logan would compete in the U.S. Army All American Bowl in San Antonio, Texas, where he would have two receiving TDs. According to 247sports.com, Thomas was profiled as a 4-star prospect and received many major school offers but would ultimately decide to enroll with the Hokies at Virginia Tech.

Frank Beamer recruited him as a tight end for his obvious size and abilities, but Beamer told Logan to continue chucking the pigskin just in case. At his first practice, they would convert Logan to quarterback for the rest of his college career (cue the dramatic music). Redshirted behind Tyrod Taylor for his freshman season, Logan would take over his sophomore season after Tyrod would fall to injury. He would have a rather successful run as the Hokies QB as a very entertaining dual threat. So much so that he would take that run of success and translate it into a fourth-round pick, 120th overall in the 2014 NFL Draft by the Arizona Cardinals. His career as a QB in the league was very short-lived, to put it mildly. Against the Denver Broncos, Logan Thomas would go 1 for 8, but that one completion would go for 82 yards to the house for a touchdown (AND THE CROWD GOES WILD!!!). Unsurprising to many after hearing those minimal stats, they would lose the game 41-20.

Let go by the Cardinals and rostered by the Dolphins and Giants for short stints; Logan wouldn’t find his startup at Tight End until 2017 with the Buffalo Bills. It was there that as the football gods had mapped out all along, he would receive his first career touchdown catch from none other than the man he replaced at quarterback at Virginia Tech, Tyrod Taylor. He would leave Buffalo after two seasons for the Detroit Lions for a single season. By all accounts, after three seasons, Logan Thomas’s stats didn’t suggest he would have the season he had in 2020, but when you are given sustained volume in an offense, amazing things can happen. Posting 670 yards on 107 targets for 72 receptions and 6 touchdowns, Logan Thomas would finish the season as the PPR tight end three overall tied with the Packers Robert Tonyan.

Even with his success, people would rather deny his breakout. The hip thing to do this offseason amongst the fantasy community is to compare Logan Thomas to Gary Barnidge. If you may recall, in 2015, after being in the league for several years, Gary Barnidge would explode for a hefty nine touchdowns out of nowhere in a seven-season career that surmounted in a total of a minuscule three touchdowns. What makes the two similar, you ask? Well, for starters, it took them both several years in the league before we knew of their fantasy relevance. People strongly insist that Logan Thomas will only have that one season of dominance the same that Barnidge did. Totally unfair seeing how Barnidge would only play for a single season after his lone TE1 season. I see Logan going on to have serious relevancy over the next handful of years.

Unless you roster Travis Kelce, you know that tight end has become a constant thorn in fantasy gamers’ sides. Offseason hype will have you believing in guys that should otherwise be on your bench or, better yet, cut entirely. Knowing when these TE’s will pop isn’t easy, but rostering the right TE’s isn’t exactly as difficult. You want to know difficult, try origami some time, but I digress.

The elite tight ends are elite for a good reason. Travis Kelce led the entire league in receiving yards. Darren Waller was an absolute animal for the second season in a row. George Kittle, in limited action, was his usual rockstar self. After that, we see a significant fall-off in the production that the Big 3 will give us. In 2021 I suggest we bury the dream of putting our faith in a sole TE with sleeper value. Instead, build a tight end committee that will produce a stud over the next few years. Roster 2-3 vets that will receive a decent floor of offensive volume, two tight ends in years 1-3. Play the matchups, maybe catch lightning in a bottle along the way, but overall be ready for anything. Trust your veterans no matter how appealing your Adam Trautman’s may look on your bench. Our featured tight end of the day, Logan Thomas, is the perfect TE to use with this practice.

Still questioned value by the dynasty community, acquiring him isn’t back-breaking. Sending a 2020 3rd rookie pick or even sending a 2021 2nd would get the deal done from your average customer. If you got sticky fingers with your rookie picks, send off Nyheem Hines or possibly James Conner. These are both suggestions if you absolutely want to get the deal done, and I’m not saying it’s the best move for YOUR team. All dynasty teams are different and require different practices, and I’m only suggesting the 29-year-old, who will be 30 when the season starts, is a piece that any team can be proud of to roster.

Under contract for one more season, Logan will look to turn this TE3 season he just turned in into further success. With gunslinger Ryan Fitzpatrick, the two will develop chemistry that will hopefully have the Washington faithful smiling ear-to-ear for the first time since the RG3 days. As of today, I see him right back in that top 8 Tight Ends in 2021. Look for McLaurin and Samuels to rip the top off the offense. The backfield duo of Gibson and McKissic to keep teams honest underneath. This will leave the middle of the field to the tight end, formerly known as a quarterback. Logan Thomas will all but assuredly help the Washington Football Team in their quest to repeat as NFC East Champions. That is a Mike O. guarantee.

I just wanted to say thank you for reading this article. This is the third piece I’ve completed, and I couldn’t be happier when anybody gives me any feedback. From friends to colleagues, to strangers thru Twitter, you are All the best. To have a few people reading these and not even play fantasy football is unbelievable. Words can’t describe how awesome that is to me. Fantasy football is just a hobby of mine that I get very passionate about. Writing about it and having people enjoy or learn a thing or two from your boy is truly amazing. I just had to take a sec to give everybody reading this a quick shoutout. Until next time, salutations, Nerds.