Making the Leap: The case for Courtland Sutton as a WR1 in 2020

Courtland Sutton has been strong his first two seasons and now he’s poised to take the leap to a WR1, here’s how. 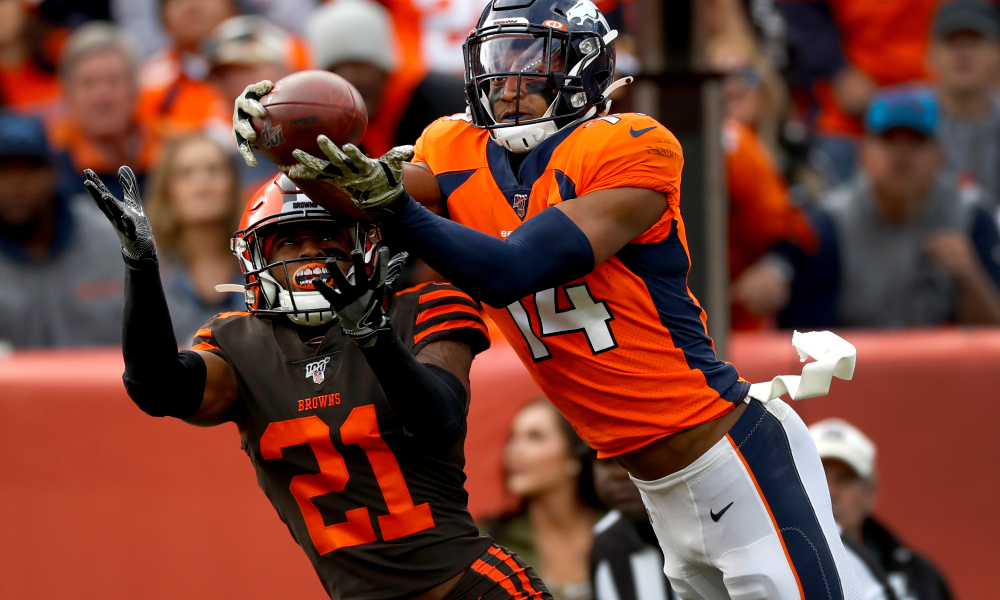 We hear it every year. Receivers make a leap around their third year in the NFL. Sometimes its players who haven’t made an appreciable impact that becomes worthy of every week starts. Sometimes its guys who’ve flashed at times that take the leap up to being one of the best in the league. Last year, we saw Chris Godwin break out and dominate during his third year. Ditto Kenny Golladay, who had shown flashes in previous seasons, looked like a top-tier option. And both figure to be Top 10 options at the position in 2020.

So, who will be the next receiver to take the leap? My pick is Courtland Sutton, and here are the reasons why.

Sutton was taken in the second round of the 2018 draft. The Broncos already had Demaryius Thomas and Emmanuel Sanders, but Sutton was immediately viewed as the future. As a Broncos fan and Colorado resident, I watched that Training Camp and remember all the amazing reports of catches Sutton made. It didn’t take him long to make an impact on the field, and by the middle of a lost season, Thomas was dealt to the Houston Texans. That paved the way for Sutton to be a starter, which he did for the final nine games. As a rookie, he finished with 42 receptions for 704 yards and four TDs.

Heading into his second season, Sutton figured to be the featured target, and he was. Sanders was dealt to the 49ers in October, and though the Broncos’ offense struggled, Sutton continued to step forward. He snagged 72 catches for 1,112 yards and six TDs. And he did it with a combination of Joe Flacco and Brandon Allen as his starting quarterback for the first 11 games, and despite being stuck in an offense that struggled to move the ball and score points. The 2019 Broncos finished 28th in yards and points, 27th in pass attempts and 32nd in touchdowns scored.

In December, the Broncos turned things over to their future quarterback in Drew Lock. And it didn’t take long for Lock to make a connection with Sutton. In their first game together, a 23-20 win over the Los Angeles Chargers, Sutton connected with Lock for four receptions, 74 yards, and two touchdowns. That included a one-handed diving catch that was one of the top plays of the year. That was just one of the highlights in a year two that saw Sutton record his first 100-plus target season, first 1,000-yard season, and finish as WR19.

So, what can we expect in year three?

There are a few arguments against Sutton being a WR1 in 2020, and that begins with the fact Sutton is on to his third offensive system and third offensive coordinator in as many years. That’s not typically a recipe for success, though Sutton managed to improve in all categories (save for yards per reception) despite the same challenge and lesser QB play in 2019.

The biggest argument seems to be increased competition. After Sanders was dealt to the 49ers in early October, the Broncos never really found a secondary receiver. Rookie TE Noah Fant had 40 receptions for 562 yards and three TDs. But aside from Fant and Sutton, there wasn’t a lot of receiving highlights. DaeSean Hamilton mustered 28 receptions for 297 yards, and Tim Patrick managed 16 receptions for 216 yards. That figures to change this season with the Broncos adding Jerry Jeudy, of Alabama, and K.J. Hamler, of Penn State, in the draft in April. So, while the Broncos figure to have better options at receiver, that doesn’t mean Sutton won’t take a step forward.

The Broncos’ biggest addition this off-season was arguably offensive coordinator Pat Shurmer. Shurmer has plenty of experience, serving as an offensive coordinator for the St. Louis Rams, Philadelphia Eagles and Minnesota Vikings, and as head coach for the Cleveland Browns and New York Giants. And in those stints, he’s managed to use a variety of weapons to move the ball and score points, including tight ends, receivers, and running backs. This makes him a good fit for the Broncos and is also why I’m optimistic for Sutton in 2020.

This speaks directly to the concern about increased competition. In 2014, Shurmur was running the offense for the Philadelphia Eagles, where Nick Foles and Mark Sanchez combined for 4,518 yards and 27 TDs. In addition, LeSean McCoy rushed for 1,319 yards. And the Eagles were able to share the wealth and produce several strong receiving options. In the backfield, McCoy and Darren Sproles combined for 99 targets, while tight end Zach Ertz had 89 targets for 58 receptions and 702 yards. And yet, the Eagles also had three receivers with 90 or more targets. Riley Cooper had 95 targets, grabbing 55 receptions for 577 yards. In comparison, Jordan Matthews had 103 targets resulting in 67 receptions for 872 yards and eight TDs, and Jeremy Maclin had 143 targets resulting in 85 receptions for 1,318 yards and 10 TDs.

The Broncos have a good core of young weapons, including running backs Melvin Gordon and Phillip Lindsay, tight end Fant and receivers Jeudy, Hamler, and Sutton. But what the history of Shurmer’s offenses shows is they can all succeed.

Sutton is the most talented in the group and already had a season with 100-plus targets and more than 1,000 yards. It’s not unreasonable to think he can take a leap, even with a better supporting cast. And if he does, moving from WR19 to WR12 or higher doesn’t seem that far-fetched.

Sutton is a guy I like a lot to take a leap, and if he does, you’ll get him at a draft discount. After his strong 2019 finish, Sutton is still going at anADP of 17 in PPR and 24 in Standard. It’s not a steep discount, but if you think he can be a WR1, you’re getting that production at a discount. He’s a young receiver on an ascending offense. I like Jeudy and Hamler, and I’m excited to see Fant take a step forward, but this is Sutton’s team. He’s established himself as the lead guy, and I think he’s just getting started.

Matthew Fox is a lifelong Broncos fan and a dynasty football fanatic. Find more of his takes @knighthawk7734 on Twitter or as co-host of the Fantasy Football Roundtable Podcast.