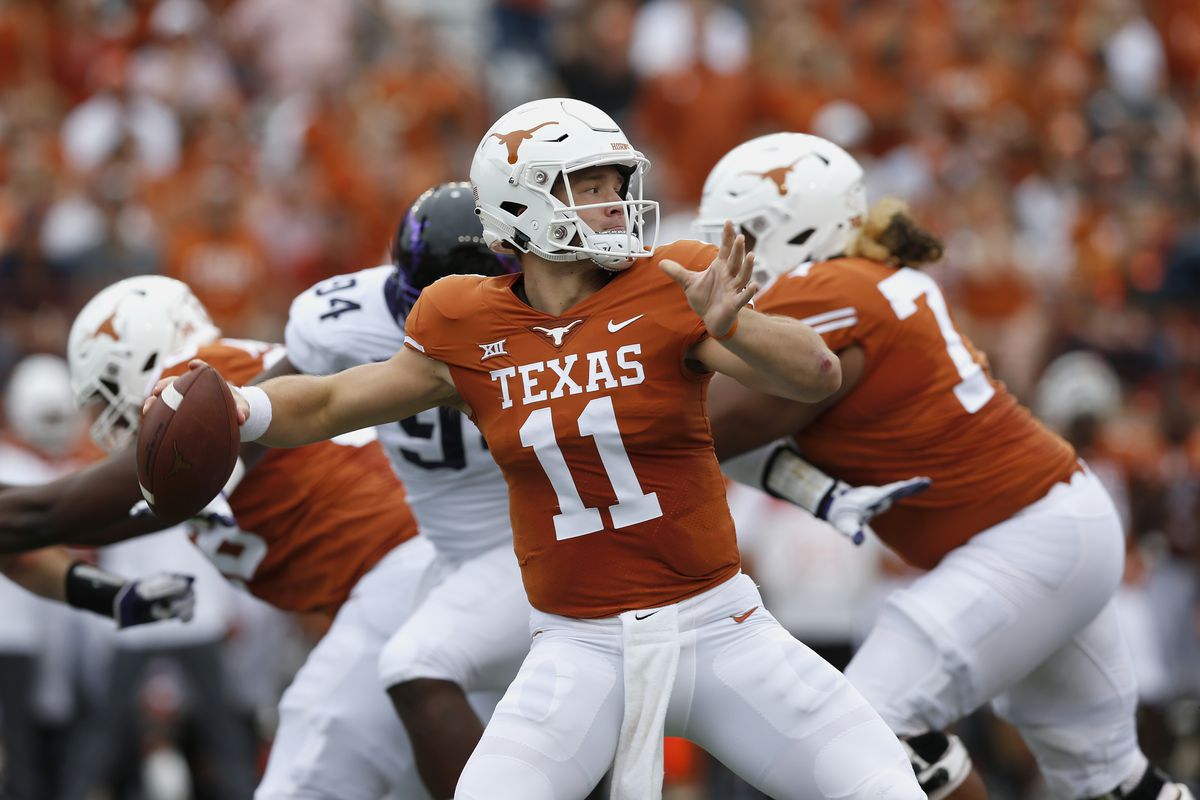 For starters, many of you may be thinking about what a Devy league is. It stands for Developmental players. In a Devy league, you are drafting college players before they are eligible to enter the NFL draft. This kind of league benefits you more than you may originally realize. For starters, you now pay more attention to College Football. You learn about the prospects and in return learn more about the incoming rookie class and its depth. Most Devy league drafts are usually two to three rounds, which you may think, won’t that affect the rookie draft? No, it doesn’t. See not all players drafted in a Devy draft are going to be coming out this year. For instance, a couple of players in this article will be players coming out in the 2021 class.

Now that I’ve given you a small breakdown of Devy leagues I would encourage you to check out Garret Prices article here, to learn more about the benefits of playing in a Devy league. In this article, I will break down my top quarterbacks 10-6 and give you a few guys to watch out for. I would draft them in this order in a Devy league draft, and these ranks can also be applied to anyone playing in a College Football fantasy league. During each break down I’ll discuss their college production while also give you my opinion on how they might translate to the NFL, so let’s start breaking down some Devy studs.

Love took a huge step forward in his Junior year, jumping from eight touchdowns his freshman year to 32. He took a step forward in everything and with his passing yards ended up ranked 14th in CFB in 2018.

Jordan love has some of the best physical tools in this class. He is one of the best in making off-script plays and rarely gets brought down in the backfield, usually escaping the pocket and make plays with his legs or arm. He has shown great touch and accuracy in the middle of the field. Consistently shows good speed on the ball and can throw darts in the short areas, while also showing the ability to drop the ball in over the top of the second level. One of my favorite things about Love is his ability to make plays outside the pocket, He can break you down with his legs, but does a good job keeping his eyes down the field and making off-balance throws look easy.

Love’s best assets might also be one of his biggest faults. He tends to rely too much on escaping the pocket and throwing up prayer balls, hoping his wide receiver comes down with it. He struggled at times to read defenses, including forcing the team to the line of scrimmage quickly and looking to the sideline for audible play calls.

In this clip, Love makes a nice throw on the run allowing the receiver to dive under it for a touchdown.

In this clip, Love shows off some of his arm strength. With a quick flick he sends it 40 yards for an easy touchdown.

Nate Stanley joined Iowa as a three-star prospect per Rivals.com

Stanley became the starter his sophomore year and has continually improved. He played one of the best games of his career against a good Ohio State Buckeyes defense. His touchdown to interception ratio in his first two years, 52-16, has been amazing. A great senior season could see him jump into the bottom of that first tier or top of the second tier of draftable quarterbacks.

Nate Stanley is a big-bodied NFL prototype quarterback. He is a talented thrower to all three levels of the field. He does a good job of recognizing defenses and taking what is given. He can move around in the pocket and does well to step up in the pocket continually keeping his eyes downfield and releasing a shot to his wide receivers putting good zip on the ball.

Stanley does struggle to make plays outside the pocket. While he can move around he isn’t exactly blowing people away escaping the pocket. His accuracy tends to fail him as well when on the move. He tends to struggle with bouts of inaccuracy and has to become an efficient passer. While he is good in the short to medium parts of the field, he has struggled in completing deep passes. Stanley needs to put up more passing numbers and work on sideline throws in his final season.

In this clip, I love how Stanley steps up in the pocket and fires a laser down the field. He puts it where only his receiver can catch it for a big play.

In this clip, Stanley flushes out to the left, easily breaks the tackle. Scrambles to the right with his eyes down the field and fires a laser off balance for a touchdown.

Jalen Hurts joined Alabama as a four-star prospect per Rivals.com

Hurts entered the transfer portal after his junior season and moved on to Oklahoma to finish out his college career. While he will be joining a coach and team that has produced the last two Heisman Trophy winners, Hurts is a much different quarterback than Lincoln Riley’s previous quarterbacks. He is a good running quarterback, but he’ll need to prove he’s more than just a runner to succeed at the next level.

Hurts playing style has always revolved around him being a running quarterback. When in space Hurts can make you miss and can easily break pocket on designed runs and make most of them successful. When given enough time Hurts can throw the ball accurately. This will be huge moving into an offense that has relied heavily on passing the past two years.

Hurts tends to run too often. When getting pressured instead of looking for RB or WR outlet he drops his eyes and looks for rushing lanes to run with the ball. He tends to loft the ball in the short areas, which likely won’t be successful at the next level. To improve Hurts needs to put more zip on the ball and throw with more anticipation to allow receivers to run more in space.

In this clip, Hurts does a good job recognizing the man coverage. He lofts the ball and allows his receiver to go and get the ball.

In this clip, We see how elusive Jalen can be when he runs the ball. Speed to get to the outside and scores a nice touchdown.

Sam Ehlinger joined Texas as a four-star prospect per Rivals.com

Ehlinger was pressed into service his freshman year and showed us some promise, he then stepped up and looked like a completely different player in 2018. While he only finished as QB23 in completion percentage in 2018, his 25-5 touchdown to interception ratio was incredible.

Ehlinger, while having an overall good 2018 season, was much better at the end of the season than he was at the beginning. He can be a dangerous runner and is quite effective as a scrambling quarterback. When he gets outside the pocket Ehlinger makes good throws on the move, making him even more dangerous.  in 2018 Ehlinger showed off good arm strength and more downfield passing ability, he can truly fire a rocket when he needs to.

Anticipation throws are Ehlinger’s biggest issue right now. He misses wide receivers before they come open and throws the ball late. His accuracy is sporadic and needs to be improved before he gets to the next level. Ehlinger tends to hold the ball too long at times and is then forced to move out of the pocket, while he can throw on the run he tends to be more inaccurate when he does.

In this clip, Ehlinger while given a ton of time waits and fires a laser to the back of the endzone.

In this clip, Ehlinger is forced to escape the pocket. While the catch is a bit lucky for him to be flushed out and throw off balance with defenders on him shows off his arm strength.

Costello joined the Stanford Cardinals as a four-star prospect

Costello has had an interesting start to his college career, playing in just 11 games and only amassing 1,573 yards. He did however, have a great touchdown to interception ratio 14/4. He improved from his sophomore year to his junior year, throwing for over 3,000 yards and racking up 29 touchdowns. He has produced in what I considered a system team that doesn’t always play to his strengths. He won’t be in the top choices of NFL draftable quarterbacks in 2020 but can increase his stock with a big senior year.

Costello has all the tools that will entice NFL teams. Size, arm strength, leadership, and intelligence. He consistently shows the ability to manipulate defenders and then hitting the wide receiver that becomes open. Seems willing to test man coverages often and throwing the ball up to allow his receivers to make plays. Shows good velocity on the ball to get the ball to receivers in short and deep windows. Shows surprising athletic ability when moving around pressure in the pocket. Tends to show a willingness to stand in the pocket and deliver the ball while taking big hits.

Costello tends to underthrow seam routes and has done so on some downfield passes as well. Struggles at times to throw timing passes, allowing defenders to get to the ball or throwing inaccurately to his receiver. While his willingness to sit in the pocket and take the hit is admirable, he tends to panic and sidearm throws affecting his accuracy even more and leading to multiple interceptions.

In this clip, Costello does a good job stepping up and avoiding the rush. Fires a touchdown pass off balance.

In this clip, We see more of Costello’s arm strength. Stepping up and firing a laser off his front foot.

Those are my current Devy prospects 10-6 at quarterback for the 2019 season. I’m fairly high on all of these guys for the college game and upcoming season, where they possibly go in the NFL will be interesting. I will list three quarterbacks below that finished just outside my top 10 that I think could easily jump into by years end.

I hope you enjoyed my breakdown of these College/Devy quarterback prospects. If you would like to see how I ranked the rest of my quarterbacks, check out our ranks on Dynastynerds.com. Check back soon and see which quarterbacks made my top five for the 2019 season.