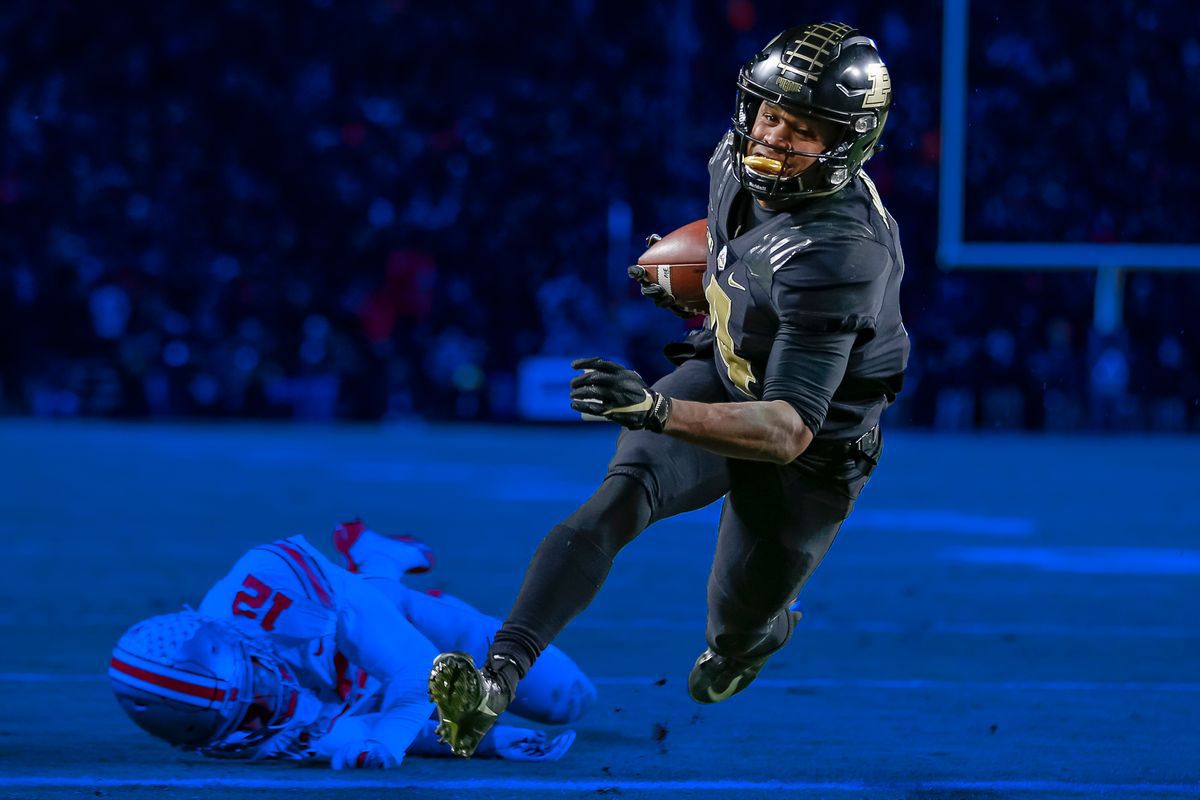 For starters, many of you may be thinking about what a Devy league is. It stands for Developmental players. In a Devy league, you are drafting college players before they are eligible to enter the NFL draft. This kind of league benefits you more than you may originally realize. For starters, you now pay more attention to College Football. You learn about the prospects and in return learn more about the incoming rookie class and its depth. Most Devy league drafts are usually two to three rounds, which you may think, won’t that affect the rookie draft? No, it doesn’t. See not all players drafted in a Devy draft are going to be coming out this year. For instance, a couple of players in this article will be players coming out in the 2021 class.

Now that I’ve given you a small breakdown of Devy leagues I would encourage you to check out Garret Prices’ article to learn more about the benefits of playing in a Devy league. In this article, I will break down my top wide receivers 5-1 and give you a few guys to watch out for. I would draft them in this order in a Devy league draft, and these ranks can also be applied to anyone playing in a College Football fantasy league. During each break down I’ll discuss their college production while also give you my opinion on how they might translate to the NFL, so let’s start breaking down some Devy studs.

Tee Higgins joined the Clemson Tigers as a five-star prospect per Rivals.com

Higgins is an absolute beast. He came out and had a subpar freshman season, but really broke out his sophomore year including adding 12 touchdowns. Showing off all of his ability and cementing himself as a top receiving prospect in college football. Going into likely his last season in college he has an elite prospect on the other side of him in Ross, who should help him free up some more one on one coverage. He should easily work his way into a first-round pick after likely another great season.

Higgins is a big wide receiver with a phenomenal catch radius. He has fairly strong hands and is one of the best in contested catches and high points the ball with the best of them. He has a great first step and is fairly quick off the line of scrimmage. Higgins has a long stride allows him to quickly move down the field. Fairly good at evading tackles and breaking them. He can also be extremely dangerous in the open field after the catch.

Higgins struggled at times in tracking the ball. He made some bad adjustments to balls thrown away from him and adjusts late to the ball. He also struggles off the line at times against physical corners.

I mean my god Higgins. For starters, he adjusts well to this ball in the air, plucks it out of the air over the defender. He then makes a quick spin move uses his speed and strength to score the touchdown, showing off all of his talents here.

I love this catch by Higgins. For starters, he uses his left hand to secure the catch while using his right hand to keep the defender off of him. I love his awareness to stay in bounds and sprint toward the end zone.

Jalen Reagor joined the TCU Horned Frogs as a four-star prospect per Rivals.com

Jalen Reagor broke onto the scene in his sophomore year when he show-cased unbelievable speed and talent. I personally started following him more closely as I watched him live in Arlington, Texas beat up on my Buckeyes. He has rarely had a good quarterback throwing him the ball so to be able to put up the numbers he has is quite remarkable to me.

Reagor has elite speed and showcases it when he goes zero to sixty in a heartbeat. If he gets into the open field or in a foot race it’s a guarantee you won’t catch him. Reagor consistently eliminates all pursuit angles and has great short-area quickness. Has an extensive route tree despite what many believe. He possesses elite balance, elusiveness, and play strength.

My main concern with Reagor is can he produce again this year. As mentioned previously, he burst onto the scene last season, after little production in his freshman year. He hasn’t done much so far this year though we are only two games into the schedule for TCU. He also has some drops on his resume as well but those likely can be easily corrected. Has had a decent amount of body catches which will need to be improved on at the next level.

Reagor excels in quick moves off the line and then hitting full speed in a few strides. Reagor is already a step ahead of his defender here in five steps. He uses his speed to continue to create separation, adjust to the ball in the air and make a nice touchdown catch.

Reagor makes a great concentration catch here and immediately goes to work. Great contact balance and elusiveness allows him to escape defenders. He then uses the jets to get him a touchdown.

CeeDee Lamb joined the Oklahoma Sooners as a four-star prospect per Rivals.com

CeeDee Lamb has been an absolute stud for the past two seasons and is on track to do the same again in 2019. He has had the benefit of playing for an offensive genius in Lincoln Riley and two Heisman winning quarterbacks in Baker Mayfield and Kyler Murray. Many thought including myself that Lamb might be held back some by predominantly running quarterback Jalen Hurts becoming the Sooners starter. However, he has already started out strong and likely will continue to dominate throughout the season. The biggest question for Lamb this year isn’t how good is he, but how close can he get to Jeudy?

Lamb has great body control and is elite in this class at ball tracking. Does a great job getting his hands to the catch point. I can’t state this enough he has incredible hands. He shows off good speed. He has excellent concentration when brining in deep balls or contested catches. Altogether one of the best receiver prospects I’ve seen, he has the complete package.

Lamb doesn’t have elite speed but can still get it done. Some will question his route tree as it isn’t extremely expansive at Oklahoma.

I know this wouldn’t be a catch in the NFL, but I mean come on. Phenomenal catch by him one-handed and still to get one foot down is incredible.

I love this catch by Lamb. His adjustment to the ball toward the back of the endzone. Catches the ball with both hands and even gives a little toe tap.

Jerry Jeudy joined the Alabama Crimson Tide as a five-star prospect per Rivals.com

Jerry Jeudy burst onto the scene his sophomore year and had everyone excited for his junior campaign. He played so well he easily moved into the top spot of the 2020 class for all of us. His incredible play added to being on one of the best football teams in college football has just increased his value you even more. He likely will be a top pick in everyone’s dynasty drafts but also a top NFL pick. His 2019 season with Tua and the Crimson Tide could end up being one of the best years we have seen from a wide receiver.

Jerry Jeudy has some of the best speed and quick-twitch abilities. He has incredibly strong hands. Quite possibly the best route runner in this class. Elite in route running and creating separation from even the best cornerbacks in college. Underrated jump ball and contested-catch receiver. He has incredible explosiveness and is quite literally a homerun threat every time he touches the ball.

Jeudy doesn’t have many flaws if any. Some will argue his smaller frame will cause him issues in the NFL. He does tend to struggle more with physical corners who press him at the line of scrimmage. While he is elusive and can avoid tackles he isn’t great at breaking them.

While this isn’t some amazing catch or touchdown, I wanted to add this clip to show just how elusive Jeudy is. His start/stop ability is insane and is one of the most elusive players in this class.

Much of the same here for Jeudy. Watch as he almost stops on a dime his quick fake to get by the defender and score. If only he didn’t step out of bounds this would have been one of the best plays in College football.

Rondale Moore joined the Purdue Boilermakers as a four-star prospect per Rivals.com

Rondale Moore is not only my number one college wide receiver prospect but also one of my favorite players to watch. He absolutely burst onto the scene last year and caught my attention after the beat down he alone put on Ohio State. Moore can be used all over the field and is a versatile weapon. While he can’t come out until the 2021 draft he will likely be one of the top options as he has already shown off his promise early in the 2019 season. While Purdue the team is not necessarily appointment viewing, do yourself a favor and tune into one game this season and watch this kid work his magic because he is truly a magician every time he touches the ball.

Moore is a dynamic prospect and while he has things to improve on he is already proving to be a top prospect. Already as a young player, he shows great route running ability getting in and out of his cuts with ease. He has game-changing speed and with that is a threat every time he touches the ball. Whether that’s in the returning game or receiving or running the ball. Has shown great tracking ability on deep balls and already has great hands. Very few double catches or drops. Even though he is small in stature he is well built and thick in the lower body. He plays physical for his size and can break tackles. He is the most fun to watch after a catch as he is extremely elusive and dangerous. Great vision and body control.

Moore’s biggest weakness is his size. Due to his height, he does limit some of the windows available to him from his quarterback. It also worries me a little bit moving to the next level with bigger more physical corners. His size hasn’t slowed him down yet though and with his talent, I would imagine it won’t. That will be the biggest question mark for him moving forward though.

Moore takes an easy swing pass here and gets upfield. I love his physicality to fight against the bigger defenders and keep his feet moving. Which ultimately leads to him getting free and using his speed to score.

Moore makes a nice sure-handed catch here and absorbs the contact. Again for a guy his size, this is not always easy. Shakes it off and immediately burst outside and is gone. His speed is going to be lethal at the next level.

I hope you enjoyed my breakdown of the top five Devy/Dynasty wide receiver prospects. If you would like to see how I ranked all my college players check out my Devy ranks on dynastynerds.com If you have any devy, college football, or dynasty questions you can always find me on twitter  https://twitter.com/SportsfanaticMB.

🆕 When evaluating rookies, many use either film or analytics. Here, @DevyCramps demonstrates ways to combine them in order to improve our evaluations.
https://www.dynastynerds.com/film-vs-analytics-a-case-study-feat-devonta-smith/

Drop your recent trades below to discuss with the community!

Where are you all from out there?