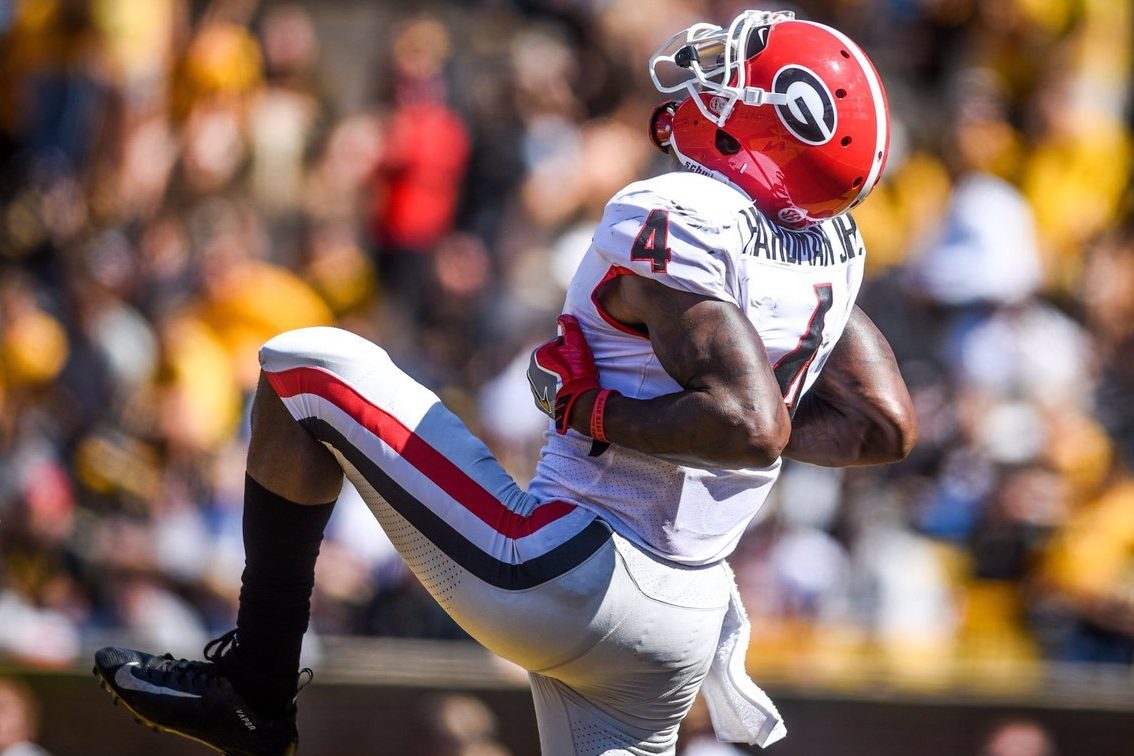 The Kansas City Chiefs have a massive problem on their hands; one of the most feared offensive weapons in the NFL may not see the field for them again. I will not dive into the details and circumstances surrounding Tyreek Hill, but instead focus on what they did to prepare for the future. They traded up in the second round of the 2019 Draft to selected Georgia playmaker, Mecole Hardman Jr. It’s easy to instantly jump to Tyreek Hill comparisons given they are almost identical in size, athleticism, and limited college production. If you really look at it from a receiver standpoint, Hardman Jr. produced better stats than Hill, as Hill operated as a running back more than a college receiver.

However, despite even the best immediate comparison attempts, Mecole Hardman Jr is not the Tyreek Hill……yet. However, Mecole has a very particular set of skills that remind me of the explosive player maker who made an early living in the NFL burning defenders on deep vertical routes and punt returns.  Let’s dig a little deeper and unpack Mecole’s game and why acquiring now is a good thing.

For those that don’t know, Hardman Jr. is a former 5-star ATH recruit and did not make the full-time conversion to wide receiver at Georgia until 2017, his true sophomore season. His numbers were not eye-popping by any stretch, but he showed promise as a receiver and was an instant contributor on special teams, in particular, the punt return game. He had 39 career punt returns for 592 yards and one touchdown. He averaged 15.2 yards per return. Hardman Jr. will have a chance to make an immediate impact in the punt return game. He could be amongst the league’s best as a punt returner during his rookie campaign.

In his final season at Georgia, he saw a total of 55 targets catching 62% of those looks. Hardman Jr. had all-world talent on offense surrounding him; which explains his lack of production. His 35 receptions accounted for only 14% of his teams’ receptions. His 15.4% target share and 16.7% yardage share, show you just how much competition there was for touches on that offense. What I like about Hardman Jr. was his decision to declare early. Despite his production, he showed enough to warrant strong consideration as an early draft choice, and the NFL agreed.

Hardman’s spider graph looks, well, it doesn’t look like much outside of his 95%tile 40-time, above average bench press and solid vertical jump. He is not a physical specimen by any stretch. He has decent size and really good strength for his frame; but other than that, he has small hands, short arms, and a short wingspan…remind you on anyone Chiefs fans? Hardman Jr.’s game will not be predicated on physicality at the position.

It was reported that at his pro day he did participate in the agility drills and ran a 4.25 20-yard shuttle which would have tied him for the 10th fastest time amongst the position at the combine, but his 3-cone time of 6.75 would have given him the fastest time of any receiver in attendance. That is a fantastic time for any player. His change of direction and shiftiness’ on film correlates with this reported time.

Hardman Jr. can flat out fly. But he’s much more than a fast gadget player, playing football. He is a legit NFL WR who happens to have elite speed that translates to the field. Watching the game film, he operated mostly out of the slot. He is extremely explosive out of his stance and didn’t face much press coverage because of where he lined up. During his routes when he was contacted he was easily bumped off of his mark. This didn’t happen often and I doubt he’ll have to face much press coverage at the next level if he remains on the inside.

His route tree is limited right now; that’s no surprise for a college wideout who has only played the position for two seasons. The good thing is the routes he did run, he looked smooth in and out of breaks even though they weren’t perfect. His athleticism, speed, and draft capital will allow him the opportunity to grow and learn on the fly. Hardman Jr. catches the ball with his hands, which I like. His film did show a couple of drops, but I’m not concerned with that. His drops seemed to be more focus related, which can be easily corrected. When he does get his hands on the ball in stride or in open field, he accelerates in a hurry. He is a very sudden athlete with elite explosiveness. The vertical route and deep outs were his two most effective routes. He will immediately put pressure on NFL defenses and force defensive coordinators to keep a safety over the top. Because of his speed, he will open up things underneath for others.  Hardman Jr. can add to his NFL arsenal with his ability to run the ball on offense. I do not foresee him lining up in the backfield the way Tyreek did on occasion, but he could be a monster on jet sweeps, and quick hitting run plays. Having Patrick Mahomes and Travis Kelce will only help his fantasy outlook.

Prior to the NFL draft,  dynastynerds.com rookie rankings had Hardman Jr. at spot 47. According to some rookie ADP data pre-draft, he was being selected early to late round 4. I hope you acquired him at that time because his stock has skyrocketed more than any player in this class, as I’ve seen him go as early as pick seven in rookie drafts, and is a lock to be draft inside the top-20.

To compare Hardman Jr. to the Tyreek Hill we know now would be foolish. He is not and will not step in and put up Tyreek numbers this year.  However, he landed in the perfect spot for his skill-set to be used right away and the team needs him to do just that. I believe that he is one of the few players from this class who’s skill-set profiles similar to Hill.  I see him as an instant contributor as a punt returner and a big-play threat at the WR position. It will take him time to adjust to the nuances of the position and expanding his route tree, but I fully expect Mecole Hardman Jr. to ascend at the next level; becoming a much better professional WR than a college one. Buy Mecole, if you still can.