The dynasty nerds devy team came together for a Superflex rookie mock. Here are the guys piquing our interest in college right now. 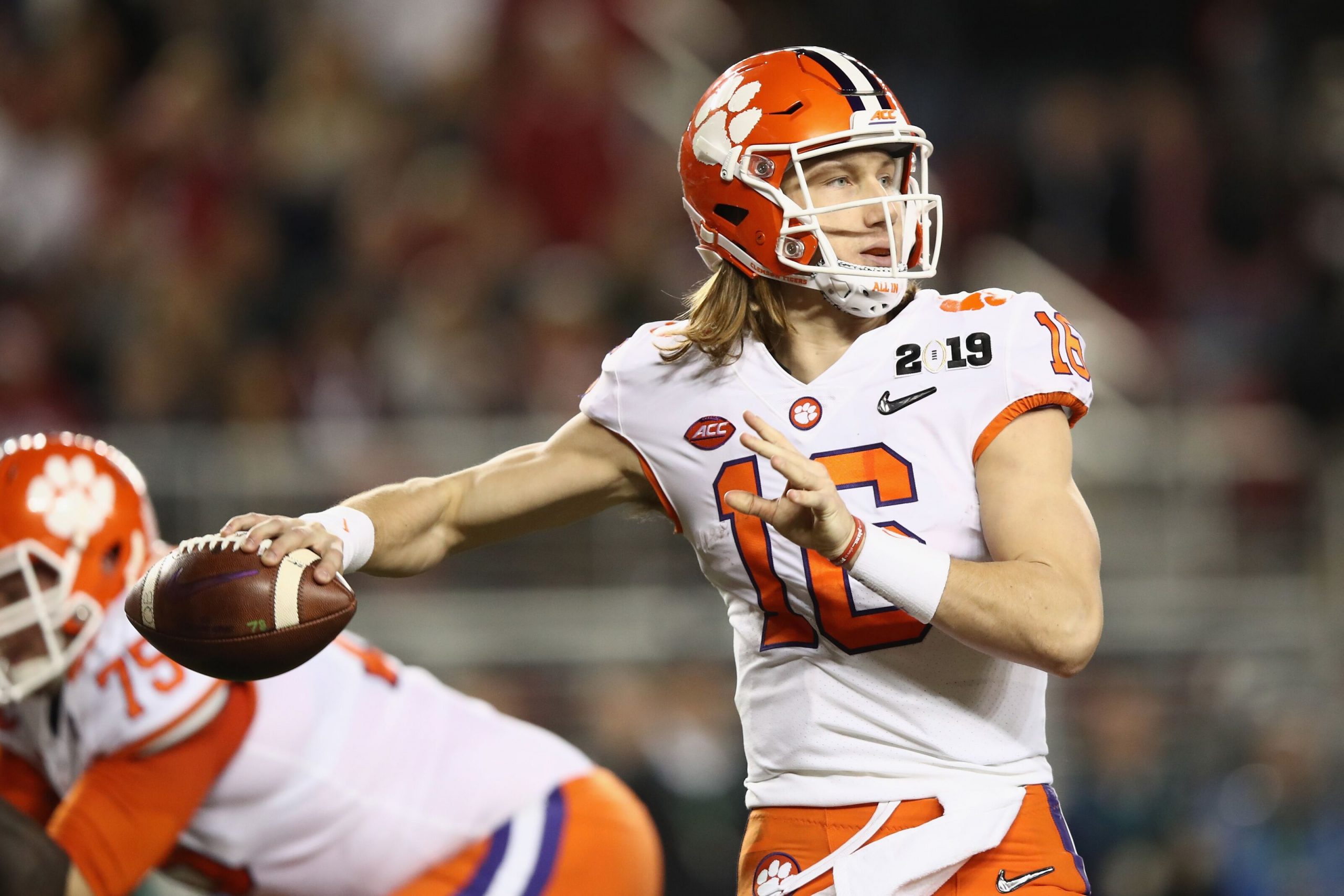 We’ve hit the midpoint of the NFL season and closing in on the playoffs for fantasy football. If your team is out of the playoff hunt, like well a few, of mine. Now is the time to start focusing on the future of your fantasy team. With college football in full effect, the dynasty nerds devy team put together a first-round mock draft for Superflex and one quarterback leagues. Here are our picks and why we would take them when we did.

It would be hard to pass on Trevor Lawrence as the 1st overall pick in a Superflex draft. Justin Fields has narrowed the gap some, but not to overtake T-Law. So far, Lawrence has 17 touchdowns and only two turnovers this season. The Tigers would’ve beaten Notre Dame if he played this past weekend. There is some speculation if Lawrence will come back to school for his senior season or enter the draft, ala Andrew Luck 10 years ago. Nonetheless, Lawrence will be my #1 pick in SF drafts this upcoming year.

Etienne before Justin Fields or Trey Lance in Superflex, you ask? While it is true that Etienne has looked more human without Trevor Lawrence under center, he has still looked the part of a potential first-round pick in the 2021 NFL Draft. Etienne has seen a drastic drop in his yards per carry with D.J. Uiagelielei under center (he is ‘down’ to 5.2 yards per carry after struggling against Notre Dame) but is showing even more as a receiver. He is averaging career bests with 4.625 receptions per game and 13.3 yards per reception. Etienne has already matched his career-high with 37 total receptions. Fields and Trask will both be worthwhile picks here depending on where they are drafted and by whom, but Etienne, much like Jonathan Taylor and Clyde Edwards-Helaire, will be going before both quarterbacks in some draft rooms. As someone who passed on Tua Tagovailoa and Justin Herbert for a runner in every single rookie draft this season, only Trevor Lawrence will be able to make me pass on the future RB1.

I am a firm believer that elite quarterbacks are more valuable than elite running backs in Super-Flex leagues. With Trevor Lawrence gone already, it leaves just one quarterback with a good chance of being an elite fantasy asset. Even though Najee Harris, my RB1 in this class, is still on the board, I will take Fields ten times out of ten due to the quarterback position’s value and the fact that he is as complete of a prospect as any quarterback in the 2020 class was.

Najee Harris is my RB1 in this draft, so I would be pleased to get him at this spot in the draft. I debated taking Chase but think the wide receiver draft pool is a lot deeper, and Najee looks like a more athletic version of Derrick Henry. Harris has looked solid in the passing game as well so far this season, so assuming he lands in the right spot, I think he can easily be a top 5-7 RB next season and for the foreseeable future.

The top WR in this class and a gift at this spot. At 1.05, you have to know both Lawrence and Fields will go, so being left with one of Chase, Etienne or Harris is a great position to be in for a playoff team. Ja’Marr Chase is an alpha at the WR position and someone I expect to be a top 12 dynasty WR very quickly if he lands on the right NFL team. The last thing we will remember from Chase will be setting single-season SEC records for both yards (1,780) and touchdowns (20). An amazing hands catcher who is a perfect fit for NFL offenses.

Trey Lance is everything you look for in a franchise quarterback. He brings athleticism to the table. He has a gun, has prototypical size, and is said to be extremely smart. Lance’s only question is his college competition because of playing at North Dakota St. I believe he’ll be the third quarterback taken in the 2021 NFL Draft. You cannot pass that up in a Superflex draft. I’d be ecstatic to get him in the middle of the first round.

Fresh off the dismantling of a top SEC and FBS defense Kyle Trask has firmly cemented himself as my QB3. Fun fact; at this point in Joe Burrows explosive Heisman winning season, his stats were 1864 yards and 22 TDS. Kyle Trask has 1815 yards and 22 TDS. He’s not getting near the talk he should, and I’m thrilled to get him in the middle of the first in a Superflex league.

My debate here was between Bateman (my WR1) and Zach Wilson. I couldn’t pass up on Bateman as a Gopher fan and as a football fan. He has the size and route-running ability ready for the NFL from Day One. He will be one of my top targets this year, regardless of the landing spot.

It appears inevitable that Zach Wilson’s Ascension will land him squarely in the first round of the NFL draft. A Konami code quarterback that is simply fun to watch. He’ll be as fun to have rostered on your dynasty team.

While still a ton of talent on the board in Superflex leagues, quarterbacks have that extra value, in my opinion. The 2020 draft class is loaded at wide receiver and tight end. For me, Mac Jones is the last of the elite quarterbacks left in this class. I’d rather take my chances on a quarterback with likely first-round draft capital and grab a wide receiver in the second round. Getting a Jones and Wallace or Surratt combo for me is better than a Moore and Purdy combo.

Man, we’re going to be spoiled for choice this year in Superflex drafts. All this high-end quarterback talent has really pushed the skill positions down the board. I’m at 1.11, and I have my choice of all but two of the running backs or all but two of the wide receivers. That’s crazy. Still, I’m making the assumption this is going to be a tight end premium and taking the #1 TE prospect in this class, Kyle Pitts. Sure, I could argue for any one of four or five wide receivers here, but let’s get the guy that is essentially a wide receiver one that you get to play in your tight end slot. Pitts is averaging 80 yards and 1.5 TDs per game, just absolutely ridiculous numbers.

The 2020 NFL Draft was filled with speedy wideouts, all of whom were — at one point or another — compared to Tyreek Hill. Moore is the closest thing I’ve ever seen to Hill, as the Purdue standout has been an absolute terror for Big 10 defenses to contain since the day he stepped foot on campus. Put him in the slot, out wide, or even in the backfield if you’d like — Moore can do it all. Regardless of where he lands, I expect Moore to become a dominant playmaker in the NFL, as his after-the-catch abilities are nothing short of mesmerizing.

That completes our way to early Super-Flex mock draft. We will continue to do these every couple of weeks leading up to our favorite time of the year, draft season. Be on the lookout as our one quarterback mock will be out soon as well. Continue to check back for all of our devy and NFL draft content as we push closer to the off-season.