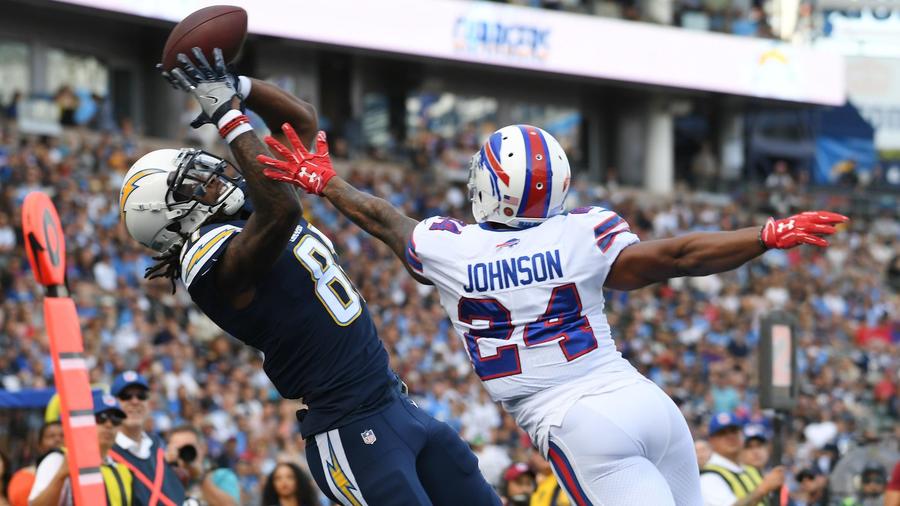 There is an overly popular trend of 1st round WRs disappointing over the past 3 seasons, and you almost can’t help but look back at the 2014 class and say “Damn, those were the days,”. Unfortunately, for fantasy owners were back to playing the waiting game. With 3-year breakout windows in full swing and heartbreak dominating the fantasy WR landscape, it’s good to always look for buying opportunities for underwhelming young players. In 2017, there were 3 wide receivers drafted in the 1st round and only 2 of which who managed positive fantasy production, and no I don’t mean respectable or optimistic I mean above zero (I’m looking at you, John Ross). While health certainly played a role for the trio of Corey Davis, John Ross, and Mike Williams, 2018 should be a year of redemption as all three dealt with injuries heading into the season and during. I’m not saying that are going to be studs this year by any means but with their respective draft capital and competition around them, they definitely have the chance to break out and have productive seasons. I’m just going to say it right now, Mike Williams is my biggest 2nd-year player target for the 2018 offseason.  Mike Williams to me is the guy to buy right now, and here is why. 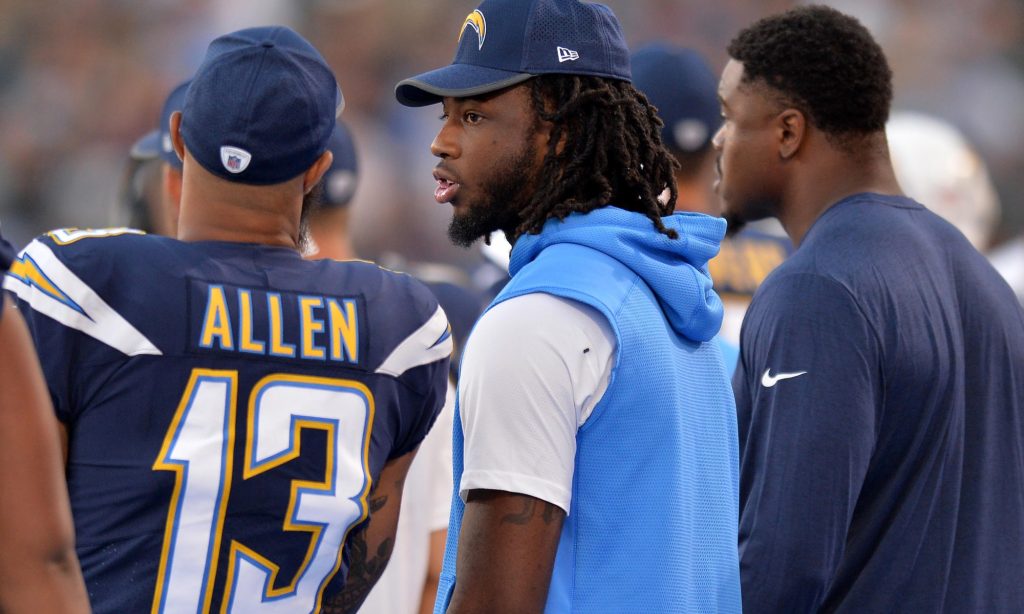 Mike Williams is 6’4 with 33 3/8” arms, good for the 88th percentile according to player profiler. Needless to say, the guy is huge. Now the first argument everyone is going to make is Keenan Allen. Yes, Allen is a stud and a damn good one at that. The thing is Allen and Williams complement each other very well. Williams success is made on the outside, beating defenders on comebackers, quick hitters, and deeper patterns. His greatest asset is his rare ability to simply outmuscling opponents and smaller defenders, using his size and skill to make tough catches to make up for poor separation at times. Check out his tape against Alabama in the 2016 national championship. I feel it is an adequate representation of what he can do well, where his strengths are and what he will need to work on. He can make outstanding plays on jump balls but can struggle in the middle of the field at times, which you will see on his college tape. These are things that can be taught and overcome in the NFL because he still has really good hands but his intangibles, simply can’t be taught. You can’t teach a guy how to contort his body to make ridiculous catches over smaller defenders in tight windows. It is a skill you either have or you don’t, and boy does Mike Williams have it. He just needs to learn to make the routine plays look routine and be more physical in the open field so he can dominate at the NFL level.

Williams is 2 years removed from Clemson and I have no doubt his route running has improved as we have already seen in limited action in the NFL. As I said his ability to do things on the outside is a great pairing with Keenan Allen. Allen is a finesse technician who runs all over the field but runs a lot of his routes from the slot, runs crossing routes to get him the ball in space and more specifically in the middle of the field. Having that mix of an outside presence and interior technician will be great for Phillip Rivers to make plays to his guys all over the field. From a scheme fit, he fits in very well to balance out the slot general in Allen and the deep threat in Tyrell Williams. The real question is what can we reasonably expect from the Chargers, and Williams specifically, this season. 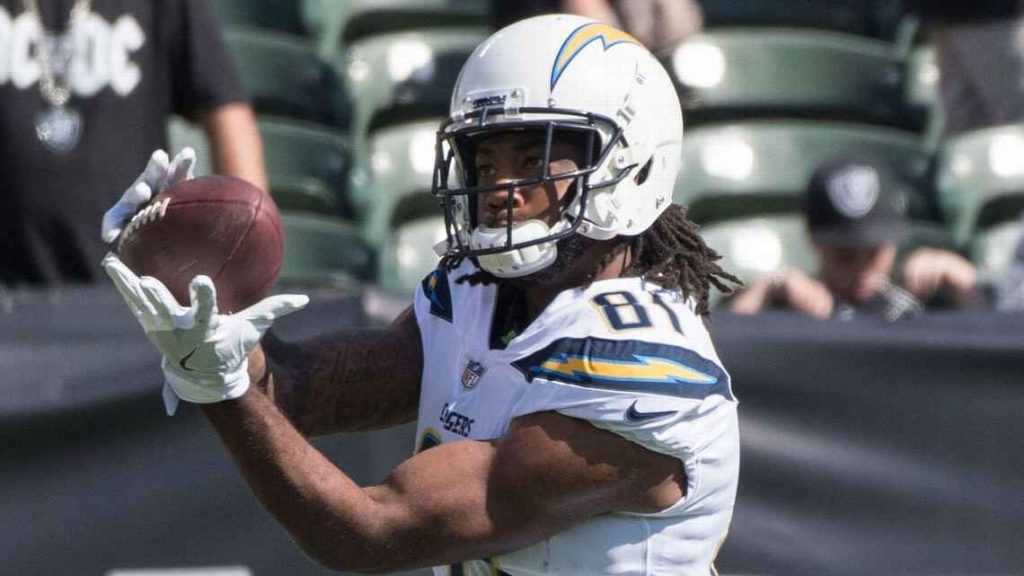 The first factor to consider for any wide receiver who you think is going to break out is to analyze their potential target share and how it breaks down in the offense. At this point, it is unclear whether Williams will walk into camp as the WR2 or 3 and this is one of the biggest questions in regards to his breakout potential. The reason this is relevant is that after analyzing the target share of pass catchers for Phillip Rivers there is roughly a 5% difference in target share between the WR2 and WR3 or approximately 30 targets a season over the past 3 years. This could be the difference maker for Williams. His role early on in the year will likely dictate whether he breaks out or only takes a step up. Based on his draft capital it is more likely then he will at least see the field as a WR3 but it may take a WR2 target share to really feel that breakout. Consider that he also has a skillset that works well and doesn’t step on the toes of Keenan Allen it seems like a great match for the Chargers to pair them together.

The second factor for Williams is the vacated targets of both the starting tight ends. With Antonio Gates retiring and the ACL injury to Hunter Henry, there is 114 targets and 7 touchdowns from last season no longer part of the offense. If Mike Williams were to snatch up all these targets with a 61% catch rate, he would have 70 receptions and 7 touchdowns which would be comparable to what Juju Smith-Schuster did last year as the WR23 overall who is now a 3rd/4th round start-up selection while Mike Williams is going in the 9th/10th round. I’m not trying to say that Williams is going to get all these targets, but it’s safe to assume that some of these targets will be spread to the WR2 and WR3 who receive about 80 and 65 targets respectively. So with these added targets moving from the TEs to WRs, there is still the factor of the red zone. Unless Melvin Gordon is going to score 20 touchdowns this year it seems very likely that due to his size, Williams will be Phillip Rivers first look in the red zone. Keenan Allen is an excellent wide receiver but he does a lot of his damage in the middle of the field. Of Allen’s 159 targets only 21 came in the red zone, while Hunter Henry had 12 and Antonio Gates had 11 and combined for 57 fewer targets than Allen had. Needless to say, Williams would be a strong candidate to see some of that red zone work that would have previously gone to the tight ends. While there is still the chance that they bring in a more talented tight end not on the roster as a bridge to Hunter Henry next season, they will likely look to develop Williams regardless because he is the guy they want long term.

All these points are really to illustrate that you should be looking to buy Mike Williams, while he may have his struggles in the middle of the field there should be plenty of opportunity for targets but more specifically I see him as the go-to in the red zone. Touchdowns equal fantasy points and there should be plenty to go around with Phillip Rivers throwing roughly 30 touchdowns a season. Can he get double digits? I don’t think it’s out of the realm of possibilities but I do think it is quite unlikely. It really comes down to if he can get ahead of Tyrell Williams on the depth chart to get those 30 extra targets. That may be enough to push him from a potential WR3 overall to a top 24 WR. Mike has got tons of TD upside especially in 2018 and I really feel like he could be a big option for the Chargers should he be able to stay healthy and produce early on in the year to solidify that role as the WR2. My prediction for him is 94 targets, 60 receptions, 827 yards and 8 touchdowns which would be good for WR24 in 2017, right behind one Juju Smith-Schuster. Pay the likely 1st round pick, or a player and a 2nd to get Mike Williams today because his ADP will shoot up the moment he has his first 2 touchdown game. You got to get in before it is too late and training camp starts. Positive reports will start coming out and he becomes more difficult to buy as the hype train starts growing. Hop on the train now cause it’s about to leave the station. Choo!! Choo!!

Let me know if you want more stuff with predictions, value gaps, things of that nature come draft time! Hit me up on twitter if you have any question about my article or anything else.