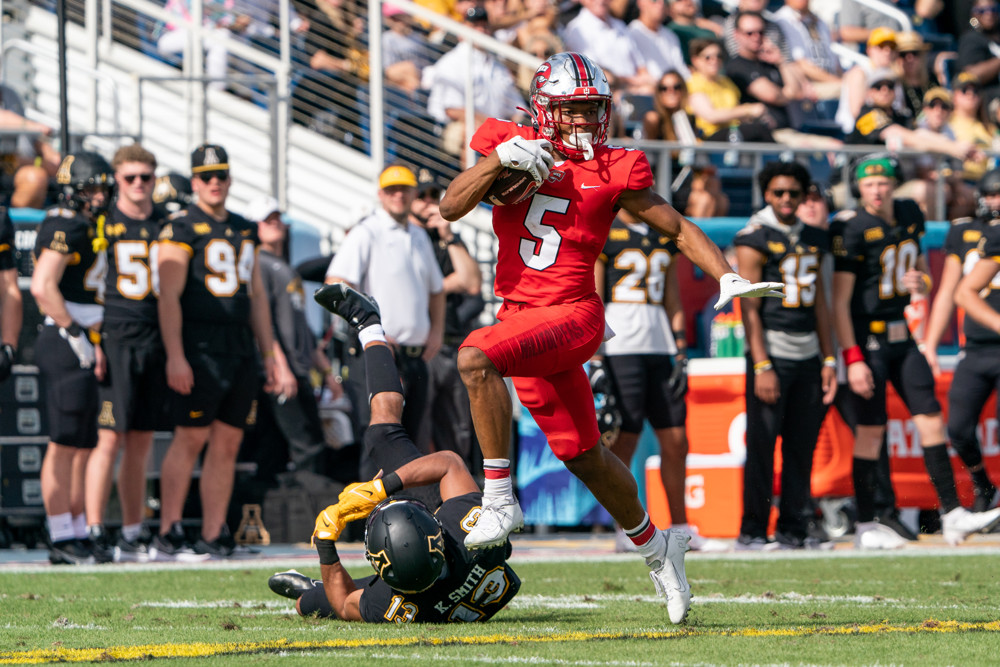 When it comes to wide receiver draft factories, the mind quickly goes to places like Alabama, LSU, and Ohio State. Come a bit north with me to Happy Valley, the home of the Penn State Nittany Lions. It is the new home of Mitchell Tinsley, one of my favorite sleeper wide receiver prospects in the 2023 draft class.

Penn State has had its fair share of wide receivers drafted highly into the NFL over the past decade. The first two names are two of the best dynasty wide receivers around. Allen Robinson was a second-round pick in 2014. In 2017, the Buccaneers took Chris Godwin in a similar spot. DaeSean Hamilton was taken in the fourth round a year later in 2018. The Broncos chose KJ Hamler in the second round in 2020. Finally, the first round of 2022 has brought us Washington Commander camp darling Jahan Dotson.

Accordingly, James Franklin’s offense will showcase four-star prospect Parker Washington in 2022. Washington is a mid-range asset whose name many devy and C2C players will recognize. However, I invite you to look across the line of scrimmage instead at his new teammate, Mitchell Tinsley.

Tinsley started playing football as a senior at Lee’s Summit High School in Missouri. He ended the season with 19 catches for 350 yards and six touchdowns.

Subsequently, Tinsley graduated without much recruiting fanfare and began his college football career at Hutchinson Community College in Hutchinson, Kansas. There, he tallied 57 receptions for 656 yards and four touchdowns and helped lead the Blue Dragons to a 19-5 record. After two seasons in junior college and a three-star JuCo prospect rating in hand, he received a few offers from smaller NCAA FBS schools. Soon after that, Tinsley committed to Western Kentucky at the end of 2019.

After a solid but nondescript 2020 season with the Hilltoppers, Tinsley burst onto the national scene in 2021. He started all fourteen games for Western Kentucky en route to being named a second-team All-Conference USA selection. Notably, Tinsley was the Capital One Orange Bowl Player of the Week following a 10-198-2 shellacking of Rice on November 13th. He capped his career as a Hilltopper with a 59-38 bowl game win against Appalachian State. In that game, record-setting Hilltopper quarterback Bailey Zappe connected with Tinsley to a tune of 7-103-2.

Tinsley went 87-1402-14 for the season, averaging just over 100 yards per game. He finished eighth nationally in receiving yards, sixteenth in receptions, and fifth in touchdown receptions. Do I have your attention now? Either way, those numbers got the attention of Penn State’s James Franklin, and Tinsley officially transferred to the Nittany Lions following the 2021 season.

The 6’1” 180 lb. Tinsley arrived in style in his debut at Penn State’s spring practice Blue and White game back in April, scoring the first touchdown. Long-time Penn State quarterback (and Tinsley’s new spring roommate) Sean Clifford had this to say about Tinsley after the game:

“I think he’s electric; I think he’s a great football player. He’s not going to run a 4.3 (40-yard dash). I think he’s a pretty good-sized wide receiver, but at the same time, he plays football well. He’s like Jahan Dotson. He catches the ball strong. He makes good plays, and he makes the big plays when they matter.”

“Mitch and Jahan have very similar characteristics. Both [are] crafty in their routes, both can catch the ball, both can catch in traffic and both are special. They make special plays.”

When a player receives comparisons to a recent NFL first-round draft pick, I start to pay attention. However, I should also temper my expectations. Despite Penn State’s vaunted weight and conditioning program, which routinely produces combine warriors, Tinsley likely will not test through the roof. He is also an older prospect, playing for three college programs in six years.

I project Mitchell Tinsley as an early-day-three prospect. Most early 2023 NFL mock drafts see him landing in that range. But who knows? Given Penn State’s track record on developing receivers for the NFL and the comparisons to Dotson, Tinsley may turn into something more valuable than a mere late-round dart throw. He is a name worth monitoring as we enter the college football season.