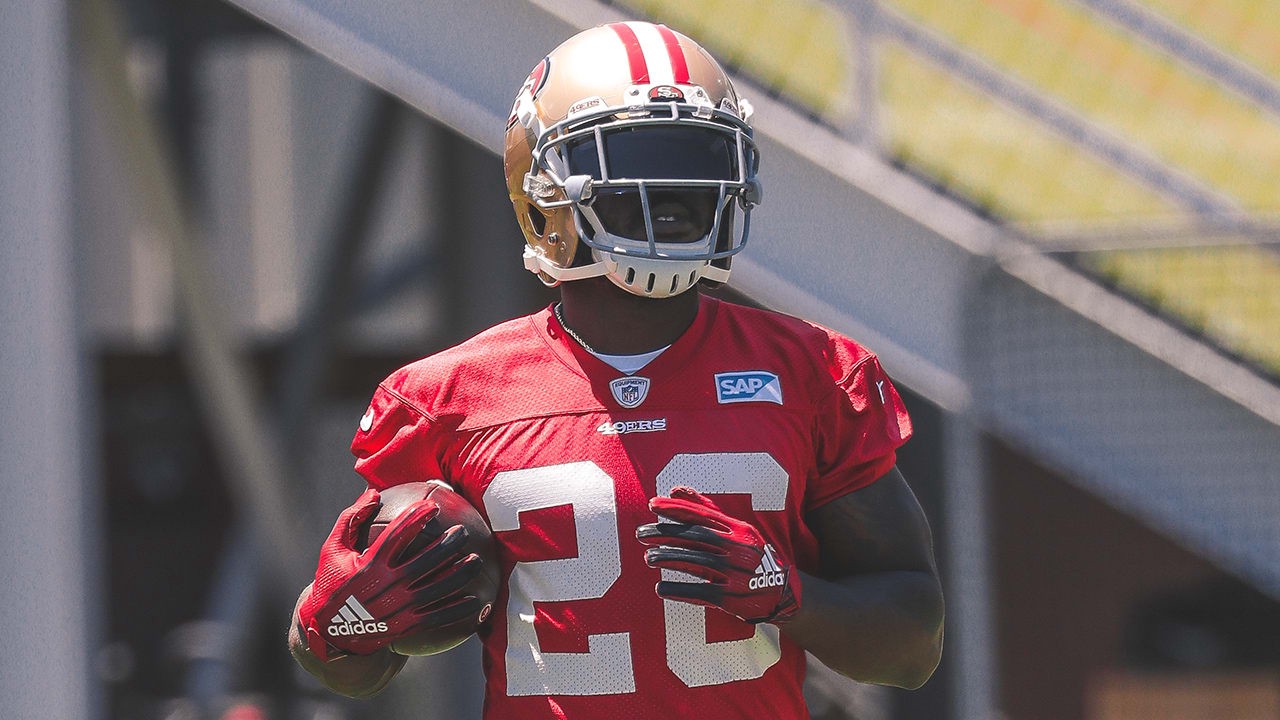 We’ve been hoping for clarity in the San Francisco backfield and this week it arrived.

Jerrick McKinnon has been shut down with a re-aggravation of his knee injury. He will likely start the year on IR.

#49ers RB Jerick McKinnon’s knee was not feeling good after working the past two days. He’ll be shut down for a while. He can’t go back on PUP. If he’s slow to recover, the only option would be to start season on IR and come back later in the season.

Instead of a three-headed monster, we have a two-man committee in what may be one of the most productive backfields in the NFL. Tevin Coleman and Matt Breida are on the rise, and their ADPs will be rising soon.  Get them cheap while you can.

Two men sharing the work in San Francisco is nothing to worry about as Shanahan runs the ball often and he runs it well.  In 2018 the 49ers had the 13th most team rushing yards and the 12th best Y/A. They produced running back with the 5th best Y/A in the NFL amongst qualified backs and a back with 7.7 Y/A, albeit on limited work.

They did this without their starting QB. They did it when their backup QB was so bad that they benched him for undrafted rookie Nick Mullens.

They did it when their starting RB went down on IR…  when their second-string RB was running with knee, shoulder, and ankle injuries…  When he went down, they did it with their third-stringer… finally finishing the season with undrafted rookie Jeff Wilson, whose athletic profile puts him in the bottom 25% of NFL backs. Even Wilson ran for 4.0 YPC, which met the top-40 mark for RBs.

The 49er’s don’t have some secret pipeline of low-profile talent.  Shanahan’s scheme creates the opportunity for running backs.

In Shanahan’s last year as coordinator in Atlanta, his offense produced the #1 fantasy RB as well as the #20 fantasy RB.  They were 5th overall in rushing yards and TDs.

As Washington’s coordinator, his rushing offense put up #1 and #5 ranked seasons.

I love Coleman at his 6th round ADP, and I love Breida in the 12th round.    They are talented running backs, they will get touches, and they will produce.  Athletically and in terms of efficiency metrics, Breida and Tevin Coleman are basically the same players.

Take a look at this thorough, data-driven analysis of Coleman vs. Breida by Michelle Magdziuk.

As Michelle points out, there are several reasons to believe that Coleman will be the higher producer of the two.  He has displayed more durability, has more experience as a pass-catcher, has a longer-standing relationship with Shanahan, and was healthier throughout the summer, gaining more valuable reps leading up to preseason.

Take Coleman in the 6th.  He’s the 27th ranked RB right now.  He will outperform that mark unless injured.

Take Breida in the 12th round.  Take them both!

The cardinal rule of not drafting handcuffs does not apply here.  We might not be 100% certain right now which of the two is the starter, but we do know that it isn’t Raheem Mostert or Jeff Wilson.

When Breida got the start and also didn’t get pulled for injury, he averaged 11.4 carries, 72.7 rushing yards, 2 catches, 24.7 receiving yards, and  .8 TDs. That’s 16.54 PPR points. That’s better than Joe Mixon, Chris Carson, and Phillip Lindsay on a points-per-game basis.

This offense gets its franchise QB back and features a revitalized receiving core.  We can expect a more reliable passing game and a more efficient offense which will extend drives and score points.

They also drafted stud edge rusher Nick Bosa to bolster a defense already littered with talent.  It’s likely San Fran will play from behind less this year and have more incentive to feed the backs to grind out the clock.

Yes, if you draft Coleman and Breida, you are tying up two bench spots.  The upside is having a locked-and-loaded RB2 with weekly RB1 upside, and a chance that we see a return to a Freeman-and-Coleman type dual attack where both players are relevant weekly.

They are both values at ADP.  All middle-round RBs have risk; this duo gives you a way to ameliorate that risk and solidify your RB3 spot.

The concern would be the opportunity cost, the RBs you are passing on in the ADP range of Coleman.  Here are backs drafted near Coleman:

Kenyan Drake, also in a timeshare, and on a poorer offense with less scoring upside

Rashad Penny, also in a timeshare, and on the lower end of the split

If you want to take one of those guys and then come back and take Breida in the 12th, that is an inarguably sound strategy.  But I like the upside of Coleman more than I like the upside of White or Drake, and Penny needs an injury to maximize his potential, in redraft at least.  In dynasty, I would have to at least consider Penny due to age and draft capital, but Chris Carson isn’t going anywhere anytime soon, and he is the starter for Seattle.

Break the rules, take them both.  Lock up the San Francisco backfield and reap the rewards.

But keep a close eye on this backfield over the next few weeks.  The first preseason depth chart has Breida running ahead of Coleman, which would make him the steal of the draft.

If that proves to be Shanahan’s intention, I’ll likely pass on Coleman. The sixth is too high to draft the short end of a timeshare, and it’s unlikely their ADPs would swap quickly enough to matter. But if Breida’s 2018 season as a starter is any indication, his backfield mates would see plenty of run, as the 195 pound back doesn’t seem to be able to stay on the field.

Whichever player it is taking handoffs from Jimmy Garoppolo this fall is a player you want on your team.

You can find me on twitter @ekballer and read my work here on Dynasty Nerds. Join the #NerdHerd for just $2.99 per month. You get access to staff consensus rankings, the buy/sell toll, extra podcasts, and more great features coming soon.

We need you for one last vote in the finals here.

Go vote for @DynastyFF_KyleM! He is one of us!

All of the memes and campaigning have lead to this. It is going to take all of your support to help your favorite analyst walk away with the win. Good luck!

This is the Championship Matchup in the Twitter #FantasyBracket

We’re only 48 subscribers away from 1k on our YouTube channel! Subscribe below to help us reach our goal and in exchange we’ll send you a virtual high-five!
#winwin
https://www.youtube.com/channel/UCyMng_8VKXye0ObmRX7Occw

We’re only 48 subscribers away from 1k on our YouTube channel! Subscribe below to help us reach our goal and in exchange we’ll send you a virtual high-five!
#winwin

In Part 5 of 20 Projections for 2020, I wrote about one of my favorite players in the NFL. Link is below hope you enjoy it!