Najee Harris has all the traits of a promising NFL talent. He’s in the shadow of Etienne, Swift and Taylor but the Alabama RB certainly has the talent to make a big impact at the next level. Check out @DynastyJon’s latest article on Nasty Najee! #RollTide #CrimsonTide #Bama 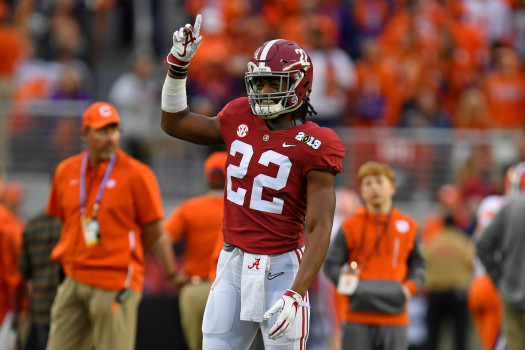 So much attention in this 2020 draft class focuses on Jonathan Taylor and D’Andre Swift at the RB position. That’s for good reason. They’re both studs and there are plenty more in this class. However, I think Najee is somewhat unappreciated in this class, even as an Alabama player. Jeudy and Tua grab most of the Roll Tide headlines, but Najee Harris has a enough talent to be an impressive NFL rusher.

The 6’2” 230-pound bowling ball has the weight and strength to be a bowling ball in the trenches, whilst possessing high end agility. You don’t see this nimbleness and agile footwork from a man that size all too often.

Running over linebackers is so common for Harris that it has almost become tiresome. Just another walk in the park as he “Ty Lue’s” over would-be tacklers. What you don’t expect to see is high-end catching and high-pointing of the football. He has an uncanny ability to adjust his big body and has soft hands, making his catches look effortless.

His athleticism also jumps off the page with an ability to hurdle, shift and accelerate. I’m very excited to see how he performs in the combine, as we may see some eye-popping SPARQ numbers.

Najee’s numbers don’t quite blow you away in the same way as Jonathan Taylor does, however we’ve seen how Alabama’s system can limit the offensive upside of future NFL stars in the past. He’s essentially been in a committee for the last few years with a number of NFL caliber backs, and this year is no different. He has been sharing the Crimson backfield with Brian Robinson Jr who has every chance to play at the next level as well.

That hasn’t stopped the former #1 High School prospect from producing when given the opportunity. In 9 games thus far in 2019, Harris has 788 rushing yards, 6 rushing TDs, and 19 receptions. Once again, he has maintained over 6 yards per carry, just as he has done every year of his college career. A breakdown of his college stats can be seen below:

If this impressive resume isn’t impressing you enough, let me just add the fact that he has only had 1 career fumble to date. In comparison, Etienne has 3, Swift has 4, Taylor has 14, Akers has 9, and Hubbard has 5. Ball security is certainly a strength for Harris.

Although it seems like all sunshine and roses so far, Harris does seem to get gobbled up the backfield quite a bit. His agility and acceleration can also be quite polarizing. There are times where he pulls off runs that are Saquon-esque. However, sometimes he looks like he’s ready to take a nap and appears sluggish. I don’t know why. There don’t seem to be injury designations that indicate he would be limited. Perhaps there are just days where he’s not feeling it?

Regardless, there’s a lot to like here. I think he has a nicely rounded game that can translate nicely to the NFL. He likely won’t be a top 5 pick at the position but can still see him be a producer early and often into his career. The long list of Alabama RBs in the NFL will continue….

I am the Waller-us
Next Man Up: Regular Season Week 12