In this week’s stock report @NateNFL skipped over the TEs, he’ll tell you why and give you 9 names to think about below! 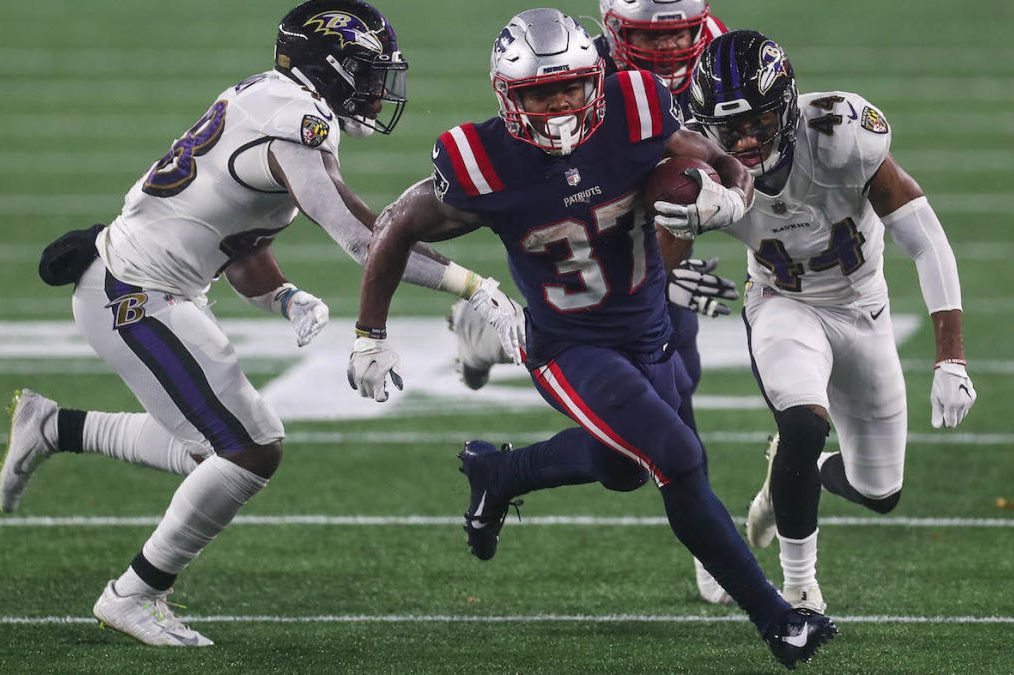 Spoiler: It was a bad week for tight ends. Mark Andrews and Rob Gronkowski were tied for TE1 this past week with 13.1 fantasy points. This the lowest score by a TE1 in a single week in 2020 and the next lowest was in Week 7 when Harrison Bryant was the top scorer with 21.6 points. Therefore I’m not including any tight ends this week. Nobody really helped their stock, and with nearly every tight end being in the same range of fantasy points, no player really was “bad” in comparison to the others.

Other than the disappointing tight ends, Week 10 was fun and featured likely the most memorable game of the 2020 season. DeAndre Hopkins is truly a freak of nature, and we should have never doubted his transition into the Cardinals offense. I think he has a great case of still being the WR1 in dynasty. But there’s a lot of young talent at that position right now, so we’ll see… anyway, let’s get to it!

With Sony Michel on IR, Damien Harris has made the most of his opportunity. In games where he’s been given more than ten carries, he has not rushed for less than 100 yards. Also, in every game that he’s played, outside of his Week 6 matchup with Denver, he has registered at least 5.1 yards per carry. He’s a great downhill runner who shows some elusiveness as well. Currently 9th in Juke Rate (29.9%) and 4th in breakaway runs (7.1), Harris is turning into a playmaker for a team that has had trouble making plays on offense. While he isn’t getting any of the passing work, that could change in the future as Rex Burkhead, and James White might both be somewhere else in 2021.

In Week 10, Brandon Aiyuk led the NFL in targets with 14. This was his second week in a row with double-digit targets, and though Deebo Samuel’s absence certainly helps, Kyle Shanahan is doing his best to scheme opportunities for Aiyuk. After all, he was their first round pick this year. Week 10 also marked Aiyuk’s 3rd game in a row with 17.5 or more fantasy points. Aiyuk has been the most exciting piece of that offense recently and has done extremely well out of the slot, averaging 3.7 yards per route run. He’s come on very nicely after missing some of the first games of the year and is the WR17 since Week 3 (even with missing a game in that time period). He’s been even better since Week 7:

It is no secret that I am a huge Diontae Johnson fan, so it feels great to be able to write about him in this section. I had been banging the drum all offseason about how Diontae was one of the top guys to acquire in your dynasty leagues, and the results have been even better than I expected. There has been some frustration with injuries this season, but he is producing at an elite level when he is on the field. His route running is superb, and he’s been a vital part of an explosive offense. Big Ben has looked great since coming back from his elbow injury and has supported three fantasy-relevant WRs with ease. It says a lot about Johnson that he is still demanding such a high target share despite sharing the field with two other great receivers. The future is very bright for Johnson, and he’s working his way up to being a top dynasty WR.

Well, now, it’s been quite the roller coaster for Daniel Jones and the Giants this year. There’s been some highs (for example, the first 70 yards of his run against the Eagles in Week 7) and some low lows (the last 10 yards of that run). Nonetheless, Danny Dimes is looking a bit better in recent weeks. He’s turning over the ball less, and the Giants coaching staff is making better use of his legs to help open up space. While it looked like he could be replaceable in the upcoming draft, if Jones can keep up this progression, he’ll be able to end the season knowing he’ll have the New York starting gig in 2021. The team around him is starting to improve, and the clean pockets are making a huge difference for Jones’ production. In dynasty fantasy football, you’re hopefully not relying on Jones to win you a championship, so at this point, you’re already looking at next year for his value. I wouldn’t be so quick to sell. There’s still a lot to see from Mr. Dimes.

Color me confused by what’s happening with James Conner. The Steelers’ offense has no problems creating yards and points, but Conner seems to be struggling. A player who has done so well catching passes out of the backfield and making things happen on the ground has been relegated to scoring only 10.8 total points in the past two games. These games have been against Dallas and Cincinnati. Two teams the Steelers have been able to get up on early and likely have felt that Benny Snell and Anthony McFarland would be better at closing the game out than risk their (slightly) injury-prone starter. That’s the storyline I’m going with because up until Week 9, Conner had double-digit points in six straight games and had five touchdowns during that period. Conner might be a good buy for a contender if the current holder thinks he’s trending in the wrong direction.

The second-round pick for the Denver Broncos this year has finally gotten on the field and is starting to create a role for himself. Jerry Jeudy and Tim Patrick seem to get their share, but Hamler is now a firm part of the Bronco’s offense. He saw 10 targets this past Sunday against the Las Vegas Raiders, and the week before that saw 10 targets against the Atlanta Falcons. His 20 targets over the past two games tie him with Juju Smith-Schuster as the tenth most targeted player. Drew Lock has certainly had his struggles this year, and there’s no guarantee that he is the starter next year. Hamler is a playmaker, and the Broncos seem excited to fit him into the offense and get him involved. Add him to the list of 2020 rookie wide receivers who have looked good.

As I just mentioned, Drew Lock has struggled this season. Certainly, the injuries have affected his play, but John Elway doesn’t have all the time in the world to wait for Lock to be healthy and progress into the Broncos’ franchise QB. Lock likely has a short leash, and if he can’t start to materialize more consistent play, then he might be looking from the outside in after the NFL Draft. Drew Lock is currently the QB33 in PPG (.3 points behind Mitchell Trubisky) and has a gross 7:10 TD:INT ratio. Not only does he have five games this season with 13 or fewer fantasy points, but in three of those, he wasn’t even able to surpass seven points. Unfortunately, the clock is ticking down for Lock, and nothing he has done so far this season has incited any confidence from me or others.

A lot of Broncos in this week’s column, unfortunately, more of them are trending down then Vic Fangio, and John Elway would prefer. Melvin Gordon has not played well for the majority of the season. Other than an explosion against the Jets in Week 4 when Phillip Lindsay was out, Gordon (and the majority of the Broncos offense) has looked below average. In the past two games, Gordon has only received three targets; two games where Drew Lock threw the ball 95 times, yet Gordon has not been a part of the passing game. While his struggles have been in line with the rest of the team, anybody expecting a bounce back in time for playoffs should remember that he has a court date coming up on December 14th for his DUI, though we don’t know if that will lead to a suspension in 2020 or 2021.

This is a hard one. Marquise “Hollywood” Brown has all the talent in the world, and so does the rest of the Ravens’ offense, but something just isn’t clicking this season. The team is still 6-3, but you wouldn’t believe it based on how the offense has played. Meanwhile, Brown has been complaining about his targets, and he’s right on about Lamar Jackson and him not being on the same page. The thing is, he’s due for some “positive regression” as he is constantly at the top of the league in air yards every week. His stock is certainly dropped to its lowest point of his short career, but I struggle to decide if he’s a “buy-low” at the moment. I’ve never been a big fan of him for fantasy football due to his “boom-bust” tendencies, but at some point, his upside offsets his poor production if he’s cheap enough.

Congrats on getting into the second half of the season. If you have a chance at making the playoff go for it because this year it’s anybody’s ball game. Who would have thought Kallen Ballage and Mike Davis could be league winners? If you’re behind the 8-ball and this season is already over for you, do your best to start collecting draft picks for this next class. Especially 2nds, this offseason is gonna be a great chance to rebuild. Lots of talent in a very deep class, especially at WR once again. But until then, as always, just enjoy football. We can’t take it for granted. We’ve learned that valuable lesson this year. And with the return of all college football, you can now watch football every single night of the week!

Feel free to hit me up on Twitter @NateNFL if you have any questions on who to pick up, who to start/sit, and of course, who you should be keeping an eye on as the rosters start to get thinner. My DMs are always open, and I love to interact with others in this community. You can also find more of my work here on DynastyNerds.com, where I write for several different categories and contribute to its Superflex rankings. I also co-host a podcast called Dynasty Rewind (@DynastyRewind) that has a weekly waiver wire show on Tuesday nights and a live podcast on Friday nights. Feel free to reach out to me or any of the other guys on the show with any of your questions.