Week 4 is done, Week 5 is coming up, and you’re weekly Stock Report is here! @NateNFL fills you in on some of the trends. 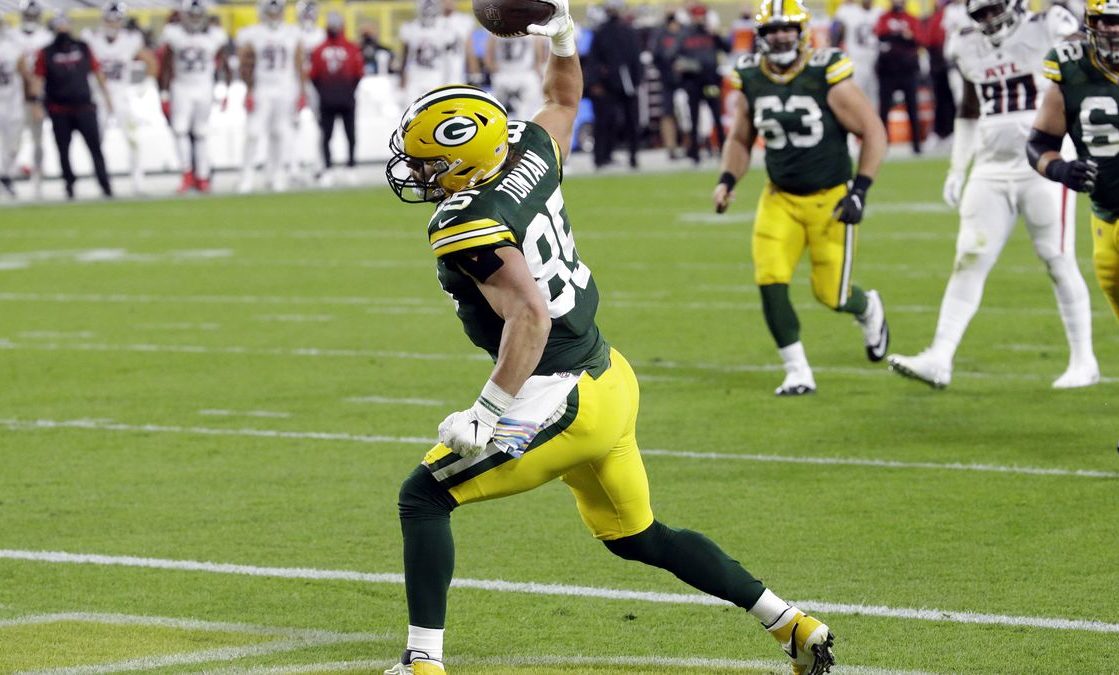 The NFL teams are officially a quarter of the way through the season (except for the Steelers and Titans), and I personally feel like it’s led to more questions than answers. We’re starting to see that the Bills and the Packers are real contenders in their respective conferences, and the Falcons and Texans have been quite disappointing. Meanwhile, the Cowboys can’t play defense, and the Eagles lead the NFC East with a 1-2-1 record, so I guess some things haven’t changed. But with the injuries piling up and the amount of positive COVID tests coming back, the season is turning into a battle of attrition. This season might not be decided by the talent on the field, but rather the sheer availability of players.

In Superflex leagues this year, Justin Herbert saw a wide range of positions in rookie drafts, as he competed not only with two great QB prospects (Joe Burrow and Tua Tagovailoa) but also the larger-than-life Clyde Edwards-Helaire and Jonathan Taylor. Anyone who grabbed Herbert in the latter half of the first round must be ecstatic with his early-season performance. He’s certainly looking like the real deal, and against a tough Buccaneers defense managed to make Tom Brady work hard for the win. Over the past three weeks, Herbert is currently QB12, less than a tenth of a point behind Joe Burrow, and he’s been very efficient. Over that time, Herbert has completed 72% of his passes and is averaging 20fpts a game. Herbert looks like the real deal.

What a performance in primetime! Tonyan became only the third TE in Packers history to have 3 TDs in a single game. We’ve been waiting for years for a TE to become fantasy relevant with Aaron Rodgers, and we might finally have the answer. The opportunity is certainly there due to injuries to Devante Adams and Allen Lazard, but at this point, it doesn’t matter Tonyan has shown up, shown out, and has the chemistry with Rodgers that puts him in a top tier of TEs. Even with Adams coming back soon, I’d expect Tonyan to still put up TE1 numbers. No worries here.

I didn’t want to admit it before, but Robby Anderson is on an incredible pace to start the year, and we have to start appreciating it. He’s not the clear #1 target (only having 2 more targets the DJ Moore), but he’s caught 28 of his 34 targets, compared to Moore catching only 18 of his 32 targets. Currently, the WR9 in PPR leagues, Anderson, has been efficient and productive on a team that is starting to pick up the pace, forcing us to ask if there is even more to expect. While I doubt the target share will go up any more, the Panthers have been unlucky in the red zone (50% Red Zone TD percentage) so far this year, and I would expect them to start collecting more TDs through the air. It’s unlikely that Anderson can keep this up throughout the year based on his history and the talent of DJ Moore, but even still, he’s established himself as a valuable WR for fantasy football.

Against the Chargers on Sunday, with Leonard Fournette out, Ronald Jones had his first 100+ yard game on the ground. Fournette is not expected back this Thursday against the Bears, but I would still be wary of crowning Jones with the lead job in Tampa Bay. He saw 9 targets on Sunday, catching 6 of them, but Keshawn Vaughn started to get involved in the passing game as well and found the end zone. Vaughn also nearly split snaps with Jones in the 4th quarter. So if it’s not Fournette, then it’s Vaughn taking away valuable touches from Jones. Sorry but he’s just not yet the bonafide RB1 many are hoping for. This is a messy backfield for fantasy purposes.

The Bengals currently the second-highest passing team in the NFL with 44.2 attempts per game. This equates to a lot of touches to go around for the Cincinnati offense, and with that, many of us are still trying to figure out Drew Sample. After C.J. Uzomah went down for the year in Week 2, Sample stepped up into the lead TE role well. Against the Browns, he saw 9 targets and caught 7 of them for 45 yards. The next week against the Philadelphia Eagles, though, he only saw one target. Instant cold water. But this past weekend against the Jaguars, Sample was targeted 5 times for 3 catches and 47 yards. So far, he’s seen his ups and downs, but if he can become a reliable weapon for Burrow, then he could easily find himself as a solid low-end TE1 based on volume alone. It’s still murky for now, though, especially with AJ Green’s production expected to catch up with his opportunities at some point.

The volume is there, and the air yards are there, just waiting for the Lamar-Hollywood connection to find the missing piece for the 2020 season. This is a great buy-low window for Marquise Brown, as the attention is on Mark Andrews and the legs of Jackson. The upcoming schedule is beautiful for Brown to “breakout” with games against Cincinnati and Philadelphia next; then, looking further ahead to fantasy playoffs, the Ravens will play the Cowboys, Browns, Jaguars, and Giants from Week 13-16. This is the time to buy-in, even though Andrews has a large target share in Baltimore, Brown hasn’t seen less than 6 targets in any game so far this season. Also, Lamar isn’t happy with the passing game this year, so there might be more efficiency coming to Baltimore soon.

To put it simply, Daniel Jones has been bad. Granted, he hasn’t had much help, Saquon Barkley was lost to a Torn ACL, and the team is currently tied for 2nd most drops in the league, but Jones has 8 turnovers through 4 games and hasn’t thrown a touchdown since Week 1. It’s looking rough for the sophomore quarterback, but it’s not the end of his reign in New York (New Jersey?) just yet. His recent streak doesn’t place him in the worst company, and the schedule does get easier in the upcoming weeks, but he will need to step up his game quick if he wants to make his way into the conversation of top young quarterbacks.

Well, the Kenyan Drake hype-train has completely derailed early into the season. A near consensus RB1 going into the season, he is currently ranked as the RB33. Drake’s fantasy performance is a big issue because he has not seen work in the passing game as many expected. Though 35 yards on 13 carries against the Panthers certainly didn’t help. He has only seen five targets through four games, with only one target in the past two games. The reason behind this absence of touches is Chase Edmonds. Already with 13 targets on the year, Edmonds has shown to be the 3rd down back and so far has shown more explosiveness. He’s only .2 fpts behind Drake for the year, and the starting job might be up for grabs sooner rather than later.

The saying “Next man up” is common in the NFL, with every player that moves down, there is usually an equal reaction of somebody else trending up. Anthony Miller, WR55, has put up 9 catches on 19 targets for 133 yards and has saved his fantasy season so far with 2 TDs. Meanwhile, Darnell Mooney has seen 20 targets, caught 13 passes, and has 145 yards and 1 TD. Miller hasn’t out-targeted Mooney, a 5th round selection in the 2020 NFL Draft, since Week 1, and it looks like the trend will continue. Mooney is an explosive playmaker, in the same mold as Henry Ruggs and KJ Hamler, and fulfills the “Taylor Gabriel role” much better than Miller in this offense. It’s Newton’s Third Law of Motion, “For every action, there is an equal and opposite reaction.” Simple.

Week 5 brings new football, and hopefully, the NFL can get a better handle of COVID. Protocols have been added onto, and the Green Bay Packers are no longer accepting fans. I’m not sure what this season will look like as it progresses, but I’m just hoping we’ll be able to enjoy as much football as possible. But as for now, we’re moving on with the intention of finishing our football seasons and walking home with the championship (or first overall pick if you’re rebuilding). It’s been an exciting first quarter of the season.

So that’s it. As the great Ferris Bueller once said “You’re still here? It’s over. Go home. Go!”