Some players disappeared in Week 5 while others emerged as fantasy producers, find who is trending in the latest stock report by @NateNFL! 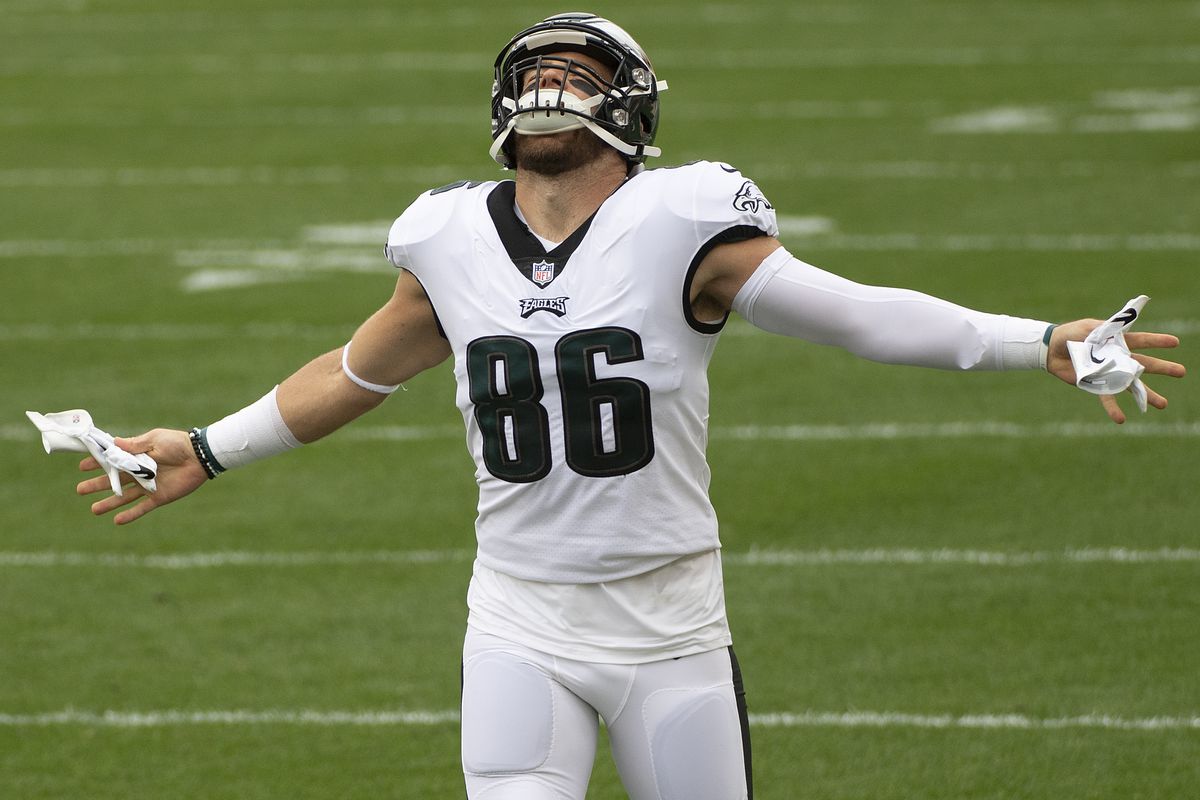 A couple of negative-COVID tests later and the Titans finally got to play football again. Now we’re waiting on Cam Newton and the Patriots to suit back up this weekend. It’s a wacky season, but that just means that all of us fantasy football players will be that much more seasoned for future years. Next year you won’t have to worry about starting Jeff Smith until at least Week 12!

At the end of the day, I’m just glad to have football back, and honestly, I enjoyed Tuesday night football. I’d take a mixture of CFB and NFL throughout the entire week if it were possible. Here’s to hoping Dwayne Johnson can get the XFL back up and running! Quick little fact, I’m not sure what’s happening in NOLA with Michael Thomas and the Saints, but I do know that he has never been cheaper to acquire. Just pointing that out. Anyway, back to your regularly scheduled programming.

Not many quarterbacks have beat Patrick Mahomes in a shootout. Heck, not many quarterbacks have beaten Mahomes at all. But Derek Carr led the Raiders to their first win over Mahomes in an exciting 40-32 victory. It was impressive how Carr pushed the ball down the field and challenged the Chiefs’ defense, and the difference has been first-round pick Henry Ruggs. With all the weapons that the Raiders have on their offense, it’s no wonder that Carr is starting to turn in top fantasy performances. Carr has never had so much talent around him, and he’s looking like a quarterback you could start just about every week.

Last week I wrote about how Kenyan Drake was trending downwards, not only because of his below-average play but also because of the emergence of Chase Edmonds as a legitimate option out of the backfield. Against the Jets on Sunday, Edmonds ran for 36 yards and a TD on 3 carries while also catching 5 balls for 56 yards. Not crazy numbers, but very efficient, exactly the opposite of what Kenyan Drake has been so far. On Sunday, Edmonds had more passing down snaps than Drake for the first time all season, the switch is happening right in front of our eyes, and you might want to go ahead and buy-in!

We already knew Mike Williams was really good. He had 10 TDs in 2018 and then surpassed 1,000 yards in 2019. Now we’re just waiting for him to combine those two stats into an elite fantasy season. This might be the year. He’s missed one game and had some injury issues during the first couple of weeks, but against the Saints, on Monday night, he went off for 109 yards and 2 TDs. Justin Herbert’s arm talent fits perfectly with Williams’ ability to get down the field, making this a combo made in heaven for fantasy football production. The “buy-low” window might have closed on Monday Night, but it’s still looking good for this season and beyond.

Fantasy-wise, Matt Ryan has been alright until Sunday against the Panthers, where he managed only 6.9 fantasy points, good for a QB26 finish. But is this a sign of what is to come? Julio Jones and the rest of the wideouts have struggled with injury, and Ryan hasn’t quite connected with Hayden Hurst yet. Ryan’s PPG average has been bolstered by starts against both the Seattle Seahawks and the Dallas Cowboys, but going forward, the defenses won’t be so porous. In the past 3 weeks (Chicago, Green Bay, and Carolina), Ryan has not thrown for 300 yards in a game and only has 1 total touchdown pass. Ryan is usually a fantasy-stud due to the high volume passing game, but something seems off this year. I’d wait before completely disregarding him, but he’s certainly someone to watch closely over the next couple of weeks.

One of the top rookies coming into this year, Jonathan Taylor, is an incredible talent. Unfortunately, we haven’t quite seen it yet in the NFL. Marlon Mack went out in Week 1, and the keys have been Taylor’s ever since. The Colts as a whole haven’t had a great offense (or offensive plan), relying on a great defense so far in 2020, but Taylor has not met the lofty expectations set for him early-on. But don’t worry, it is coming. The Bengals are a juicy matchup, and this is a week that Taylor really needs to show up and show us who he is.

Ever since a strong Week 1 performance (6/69/2TDs), Juju Smith-Schuster has seemingly played a disappearing act and has not surpassed 50 yards in any game. Still averaging 15fpts a game in PPR leagues, Smith-Schuster is currently the WR25 in points per game. Chase Claypool had his breakout game, and people are starting to forget about Smith-Schuster even though he’s been more than serviceable as a WR on your team. He’s a great value right now based on how he’s being perceived, but with Claypool and Dionate Johnson also showing production, it will be interesting to see how the ball is spread around between those three receivers.

Monday night against the Chargers was Tre’Quan Smith’s last chance to show that he could fill a Michael Thomas-sized hole in the Saints offense. Unfortunately, he was held to two catches for eight yards, and it’s not looking like Smith is ready for his breakout this season. Emmanuel Sanders picked up the slack and had 12 catches for 122 yards, and looks like he’s the WR2 in NOLA once Thomas comes back. Smith was one of the most dropped players on Sleeper and is trending downwards with Michael Thomas slated to return. I’m not sure if 2020 is the year for Smith to reach his potential. Even if he improves, the opportunity simply won’t be there with Emmanuel Sanders holding down the role across from Thomas.

When the news came out that Dallas Goedert was going to miss significant time, Zach Ertz owners everywhere started to salivate. The perfect storm was once again ready to rock, Eagles wideouts were hurt, and now Carson Wentz’s best friend Ertz was going to be the top dog in the offense. But a couple of weeks later and Ertz looks like a veteran aging out of the league. Nothing has clicked, and in the last two games without Goedart, Ertz has accumulated a total of 15 yards on 5 catches. Now I would expect that this is simply just a fluke, but it does make you wonder. He just hasn’t been able to connect with Wentz, and it’s not like the options around him are much better. I’m worried about Ertz, and you should be too, he is a leader on the Eagles, and if they are to win games, he’s going to have to step up to the plate and rekindle that connection with Wentz.

Yes, I know this is kind of cheating, but oh well. Jack Doyle was a popular sleeper pick at TE this pre-season and for good reason. Phillip Rivers loves throwing to tight ends, and Doyle is a solid player who was just signed to a long-term extension. He started solid in Week 1 with three catches for 49 yards but since has barely played as he’s dealt with injury. Enter Mo Alie-Cox, the big man who shows off incredible athleticism and is everything you want in a fantasy tight end. He had 5 catches for 111 yards in Week 2 and then a touchdown the next two weeks, but in Week 5 didn’t even get on the stat sheet. So what is going on in Indianapolis? Trey Burton.

Burton was signed after the Bears released him this offseason, and as soon as he was back and healthy, he was thrust into the lineup. In week 4, in his Colts’ debut, he had five targets. In Week 5, he had 6 targets and brought 5 of them in for 33 yards. Now I’m not quite sure if Trey Burton is the guy to own around these parts, but I do know that you’re not likely to get consistent production out of Doyle of Alie-Cox going forward as they will all see snaps, but Burton is currently getting the targets.

The Bell Tolls for Week 6

Since starting this report Le’ Veon Bell has signed with the Kansas City Chiefs, so just like I said with Michael Thomas in the intro… message the Clyde Edwards-Helaire managers in your leagues. It’s unlikely you’re going to get him for a clearance price, but it’s always worth finding out if people are scared of the most recent news reports. Sure Bell hurts CEH’s value in the 2020 season, but I highly doubt it changes the Chiefs plans to make him a feature back for the next five years (hence the 1st round selection).

Communication is key in dynasty fantasy football. You never know what kind of trade you might end up making if you just talk to your league mates. Humans are fickle, and we often are too emotional with our decisions. You can use this to your advantage as you keep a level head and stay true to your gut. Good luck out there!