The waiver wire is important for your week-to-week, but analyzing player value helps you build a dynasty. @NateNFL takes you through Week 7’s impact. 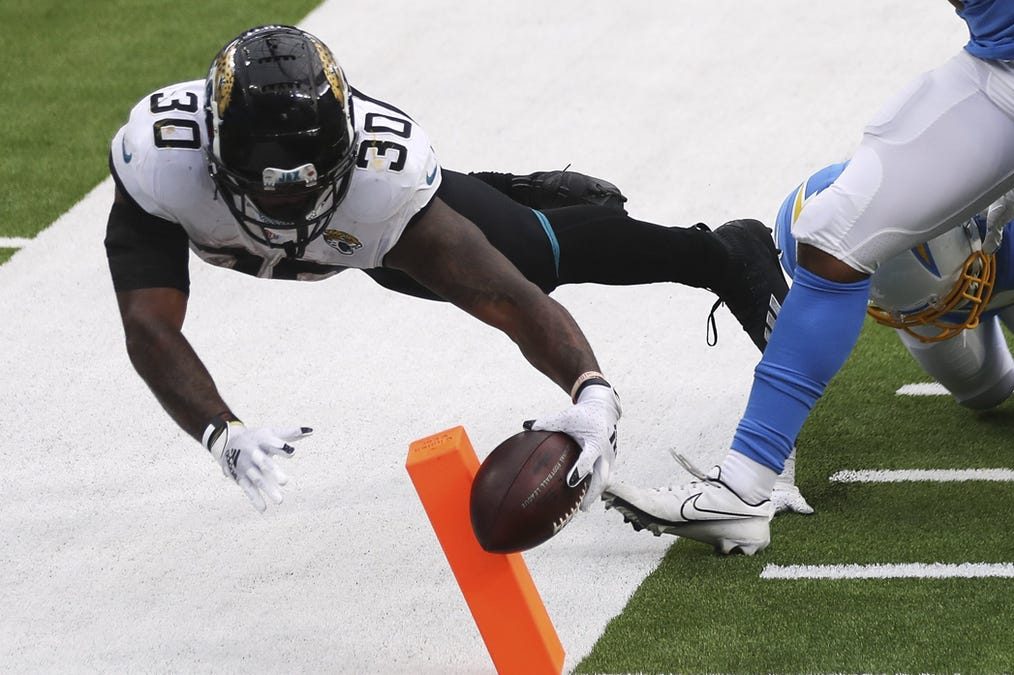 Pour one out for everybody who had Jeff Wilson Jr. on their bench this past week. Fantasy football is oftentimes more about luck than what you know. I, for one, have both Jerick McKinnon (who finished with -0.10 points) and Wilson Jr. (who finished with 32 points) in one of my leagues… guess who I started this week?

Unfortunately, I can do nothing about it now, but we can use this past week’s performances to better our chances for the rest of the season. Justin Herbert may seem like an expensive “buy” right now, but if he keeps up a fraction of this play for the rest of his career, then you could argue that no price would be too high. At the same time, having studs all over your roster is great. Still, to win championships, you have to stay ahead of the game with the waiver wire, as our top performers, this week included Jamaal Williams, Giovani Bernard, Boston Scott, Cole Beasley, Richard Rodgers, and Harrison Bryant (all of whom finished in the Top-12 at their position).

You can check out our weekly waiver wire report here, but for a long-term outlook on players keep reading below.

Probably one of the last names you would have guessed would be sitting at RB2 overall in PPR leagues. James Robinson has been fantasy gold this season and was basically free for everybody who picked him up off of waiver wires. Against the Chargers on Sunday, he finished with 31.7 fantasy points. He started the season getting the majority of the carries while splitting targets with Chris Thompson. More recently, he’s earned nearly all of the targets and is now putting in elite fantasy performances. It’’s pretty simple. He’s currently carrying some of the highest volume in the league and has been effective with his touches. As long as Gardner Minshew is the starting quarterback on this team, James Robinson will continue to produce. I just shudder to think of what might happen to this team if they decide to bench Gardner Minshew.

It’s way past time to believe in Cole Beasley, the man who just keeps on giving. One of the most consistent receivers in the league, he had scored double-digit fantasy points every week except one (Week 1 when he had 9.8 points). In PPR leagues, Beasley is currently the WR19 overall and saw 12 targets against the Jets in Week 7, catching 11 of them for 112 yards. Last year he saw 100+ targets, and he is set to break the century mark once again this year. With John Brown and the whole Bills’ tight end room continuing to miss time, Beasley has full reign over the underneath targets and has been one of Josh Allen’s favorite targets. You couldn’t ask anything more of a (likely) flex play than constant double digits, and Beasley is not likely to let you down anytime soon.

Averaging a healthy 10.4 fantasy points per game, Hayden Hurst is sitting at TE7 on the year and just now hitting his stride on the Atlanta Falcons. It looks a couple of weeks to truly get on the same page as Matt Ryan, but now with two weeks in a row of 12 or more fantasy points, it looks like the best is yet to come. Hurst may not one of the elite options out there, but he’s cheap to acquire and should be able to give you a Top-12 performance each week on volume alone. The transition was made a bit more difficult due to the irregular offseason, so I expect Hurst’s second half of the season to improve upon his first. He’s only seen 2 games with less than 5 targets, and one of those times was in Week 3 against the Chicago Bears, who have defended opposing tight ends very well so far. While a little bit older (27) than most players in their third year, Hurst is still a great dynasty asset going forward, especially for contenders this year.

The rest of this season will be very telling for the Cleveland Browns’ offense. Is Baker Mayfield really better without Odell Beckham Jr.? It was a small sample size but based on Sunday, Mayfield looked much better once OBJ left the game, finishing with basically one of the best games in his young career. Surprisingly Landry wasn’t the main benefactor of OBJ’s absence, rather the TEs, “Hollywood” Higgins, and rookie Donovan Peoples-Jones. The Browns got another win on the season and will be playing meaningful games for the rest of the year, and Mayfield will have to lead this team.

One of the most talented running backs in the NFL right now is struggling. A lot of that falls upon the Cowboys horrid offense and defense, but Ezekiel Elliott already has five fumbles so far in the season. Despite the turbulence, Elliott is still the RB3 on the season, and now with Dalton out, the team figures to lean heavily on their running game. There should still be a large workload for Elliott for the rest of the season, but unfortunately, the ceiling doesn’t seem to be there for him if the offense can effectively move the ball and get into the red zone. It might be a struggle for a while, but it doesn’t take away that Elliott is one of the best running backs in the game and still in a great situation for the long-term.

After a rough start to the season where Rob Gronkowski was averaging 4.45 fantasy points per game over the first four weeks, Gronk is finally looking more like his old self. Over the past three games, he’s seen 22 targets and is averaging a very strong 14.77 yards per reception. O.J. Howard’s absence has certainly helped and going forward, Chris Godwin will miss some time while Antonio Brown will be added to the mix. Nonetheless, Gronkowski will continue to get his share of targets, and the touchdown upside should start appearing as the Tampa Bay offense (and the entire team) is turning out to be one of the best in the league.

It was a rough day for Cam Newton when the Patriots hosted the San Francisco 49ers, he finished with negative fantasy points, and New England was handed their third straight loss. Since coming back from COVID, Newton’s stats don’t look great. His stock is down everywhere, but we know that he is talented and can perform well in this system, making him an interesting buy-low candidate for any contender. The whole Patriots offense has looked anemic recently. The team has to have some positive regression, especially with the upcoming schedule looking like they’ll have to if they want to stay competitive.

It was fun while it lasted, but Mike Davis’ time is coming to an end. Christian McCaffrey is back in practice, though a long shot to play this Thursday, and after Davis’ most recent performance, I don’t think we should be worried about him taking too big of a chunk from McCaffrey’s workload. Davis was incredibly effective while the starting running back and will likely have another good game against the Falcons this week. Still, as long as McCaffrey is on the field, Davis will be extremely limited in fantasy-relevance. Davis is a hard sell because the whole world knows that CMC is coming back, but he’s definitely worth shopping before his value truly dissolves.

In Week 3, we saw D.J. Chark connect with Gardner Minshew 8 times for 95 yards and 2 touchdowns, for a total of 29.5 fantasy points. This was the moment that Chark was elevating himself into the conversation of the top young wideouts in the league. Since then, Chark has only caught 11 of his 25 targets and has seemed to be on a completely different playbook than Minshew. This past week against the Chargers, he managed one catch (on 7 targets) and finished as the WR78 on the week with 3.6 fantasy points. As far as we know, Chark is healthy (he did battle an ankle injury for a while), so until he can get back into form, we’ll have to cast doubts upon if he really belongs in the “elite young receivers” conversation.

Sometimes we don’t have a reason why players disappear, and other times we have the signs right in front of us, but we just didn’t see it until we have that 20/20 hindsight. For example, Mike Evans, who nearly posted a goose egg despite Tom Brady throwing for four touchdowns, has been dealing with an ankle injury for a while now, and in retrospect, maybe that’s a bigger deal than we knew about. Because there’s so much information out there and so many different factors in how players perform (health, game script, cornerback matchups, competition, hot/cold streaks), you have to make sure your information is selected from a variety of analysts and beat writers. Find those who focus on the analytics, those who watch all of the tape, and find those who breakdown the injuries into layman’s terms. Variety is the spice of life, and in this instance, that spice is integral to winning a fantasy football championship.

Feel free to hit me up on Twitter @NateNFL if you have any questions on who to pick up, who to start/sit, and of course, who you should be keeping an eye on as the rosters start to get thinner. My DMs are always open, and I love to interact with others in this community. You can also find more of my work here on DynastyNerds.com, where I write for several different categories and contribute to its Superflex rankings. I also co-host a podcast called Dynasty Rewind (@DynastyRewind) that has a weekly waiver wire show on Tuesday nights and a live podcast on Friday nights. Feel free to reach out to me or any of the other guys on the show with any of your questions.