Next Man Up: Regular Season Week 16

The playoffs are upon us and every injury counts that much more. @ReflipeWThenuz is here to break down the injuries across the league and highlight the next men up for your lineups. 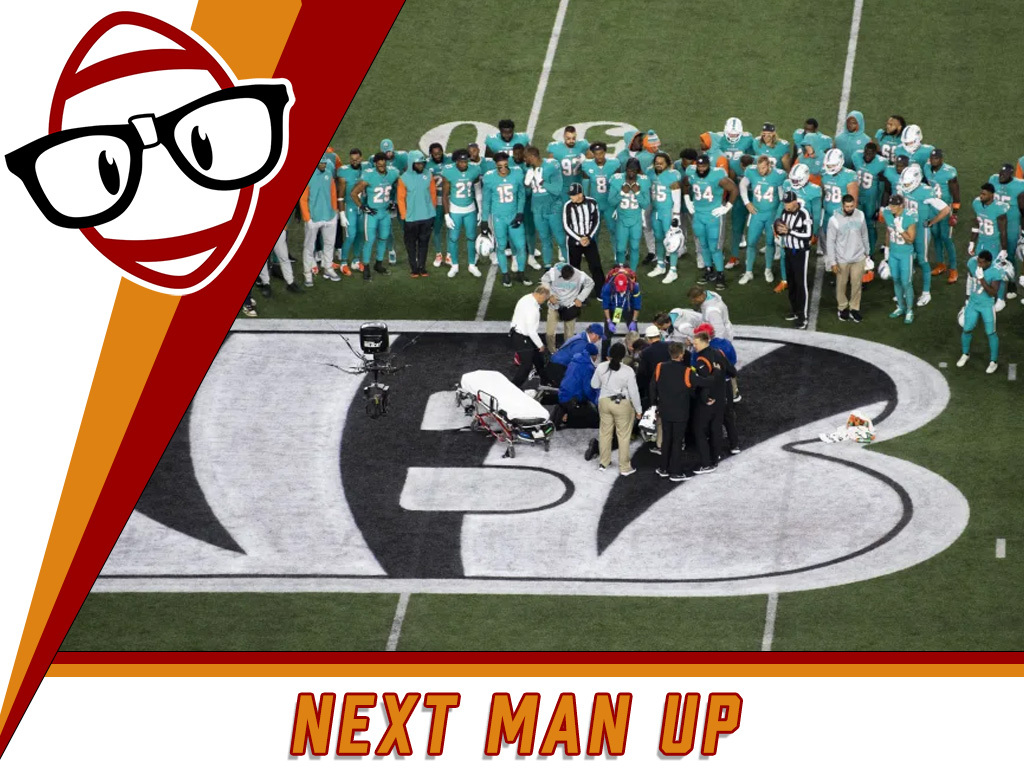 Every week players across the NFL suffer injuries. This weekly article will explore the injuries that affect your dynasty squads. We will briefly discuss both the injured players themselves and the players who stand to benefit or suffer as a result. In order to make them easier to follow, we will break down the injuries by division. Without further ado, let us examine the Regular Season Week 15 injuries and the next men up.

New York running back Zonovan Knight was forced from his team’s Week 15 loss with a foot/ankle injury. The young back was unable to finish the game. Surprisingly he wasn’t listed on the Monday injury report. This leads us to believe it is a minor injury, and he will be ready for Week 16. He should resume his committee duties with fellow running back Michael Carter. However, if he is out, it would be a bump to Carter and potentially Ty Johnson, who would take on some of the big back and goal-line duties in Knight’s absence. Keep an eye on practice news out of New Jersey.

New York wide receiver Denzel Mims was knocked from his team’s Week 15 loss to the Lions with a concussion. The former Baylor standout has had a difficult time during his tenure with the Jets. The Jets are on a short week ahead of Thursday’s matchup with the Jaguars. Consequently, Mims has already been ruled out for Week 16. This should mean a nice target share for Elijah Moore and Garret Wilson, especially if fellow receiver Corey Davis can’t clear his concussion issues from Week 14.

Full analysis⏩https://t.co/OmtzybyihD#Colts RB Jonathan Taylor has been ruled out after appearing to injure his right ankle on this play

He has suffered injuries to that same ankle twice this season#NFL #FantasyFootball pic.twitter.com/xmjeTkwX7L

Indianapolis running back Johnathan Taylor was knocked out of his team’s Week 15 loss with an ankle injury. Testing revealed that he suffered a high ankle sprain in the same ankle he hurt earlier this year. Various reports have the Colts shutting down their star runner for the rest of the season. With little to play for over the last couple of weeks, it makes sense to shut him down. This would be a massive blow to dynasty teams everywhere. The Colts would turn to Deon Jackson and Zack Moss in his place. Of the two, Jackson would be the preferred play against the Chargers in Week 16.

We got a mess in Music City

Tennessee quarterback Ryan Tannehill was in and out of the lineup against the Chargers after an ankle injury. The former Texas A&M star was able to finish the game and appears set to play in Week 16 for both the Titans and his dynasty managers. However, with this being playoff time, it is a good idea to monitor his practice reps ahead of next week. If, for some reason, he could not play, the Titans would turn back to rookie third-round pick Malik Willis in his place.

Los Angeles running back Austin Ekeler suffered a shoulder injury in his team’s Week 15 victory. The talented Ekeler never exited the game and finished the contest despite down numbers across the board. Ekeler underwent testing on his shoulder on Monday. The results were negative, and Ekeler appears ready to go for the Chargers and his dynasty managers. If he suffered a setback, the Chargers would be forced to turn to Joshua Kelley and Isiah Spiller.

Philadelphia quarterback Jalen Hurts injured his shoulder in his team’s Week 15 victory. The MVP candidate finished the game and put up some big numbers along the way. However, as you can see from the video above, he had some discomfort in his shoulder after taking a big hit by Chicago defender Trevis Gipson. There has been some early week chatter about Hurts possibly sitting out his team’s Week 16 contest against the Cowboys. With such a big game on tap, it is hard to see Hurts sitting this one out. However, if he cannot go, the Eagles would turn to former Washington State star Gardner Minshew. While Minshew would not himself score Hurts’ weekly point total, he should be able to work the offense and not be a negative for the Eagle’s receivers.

Atlanta running back Caleb Huntley suffered a significant ankle injury in his team’s Week 15 loss to the Saints. The injury was severe enough that team officials say Huntley’s rookie season is now over. His touches should now revert to Cordarrell Patterson and Tyler Algier, making both players more attractive flex plays in one of the most run-heavy schemes across the NFL.

Justin Fields is headed to the locker room after an apparent injury on the Bears last offensive drive. pic.twitter.com/rBQgfCzWEs

Chicago quarterback Justin Fields briefly exited his team’s Week 15 loss with a leg injury. He was able to return to the game after missing a single play. The uber-talented sophomore has been on an upward trajectory all season following a rough start to 2022. His passing stats leave something to be desired, but his rushing upside is worth the gamble. He has become one of only three NFL quarterbacks to ever run for 1,000 yards in a season. He has also picked up the pace on passing touchdowns, even if his yards are low. As long as he is healthy he should be in your lineups across every format. Keep an eye on his practice reps as Chicago could shut him down at any time. If they did, the Bears would start Nathan Peterman. If that came to pass, under no circumstances should Peterman enter your starting lineups.

Chicago wide receiver Equanimeous St Brown was knocked out of his team’s Week 15 loss with a concussion. The older but lesser St. Brown has been a quality blocker in Chicago while also putting up a couple of splash plays in 2022. He shouldn’t be in your playoff lineups. His absence will be felt more keenly in the running game as he is a top-level blocking receiver. If he cannot clear the league’s protocol, the desperately thin Bears would have to run with Dante Pettis, Byron Pringle, and Velus Jones Jr. in their starting lineup. Chase Claypool can’t get back fast enough.

Green Bay running back AJ Dillon was forced from his team’s Monday Night victory with a concussion. As the season has progressed, Dillon has been a bigger part of the Packer’s offense. The team has struggled to pass the ball leading to more rushing attempts. Dillon will have to progress through the league’s new protocols. Green Bay will surely need him in their Christmas Day contest against the Dolphins. If he cannot go, it would be a big boost to starter Aaron Jones who is already a must-start.

Seattle wide receiver Tyler Lockett suffered a broken finger late in his team’s Week 15 loss. The talented receiver has surprisingly had one of his best seasons with Geno Smith this year. There has been some talk about him having to miss the rest of the regular season as a result of this finger issue. Keep an eye on news out of Seattle about his status. If he were to miss game action, the Seahawks would turn to former Olympian Marquise Goodwin alongside DK Metcalf. Reserves Dareke Young and Penny Hart would fill in the gaps in three-receiver sets. Pete Carroll would likely rely on tight-end heavy packages featuring Noah Fant and Will Dissly to help Metcalf in the receiving department. Lockett’s absence would also be a ding to Geno Smith during the stretch run of the playoffs.

Dinged up in the desert

Arizona quarterback Colt McCoy was knocked from his team’s Week 15 loss with a concussion. With starter Kyler Murray already out for the year with a torn ACL, things are spiraling out of control in the desert. Former Penn State signal caller Trace McSorley would draw the start if McCoy can’t progress through the league’s concussion protocols. He offers some rushing potential in your lineups. Despite this, his arm talent leaves something to be desired. He would be a downgrade for all the Cardinals pass catchers across the board at the worst possible time. Keep an eye on the news out of Arizona and make your plans accordingly.

Thank you for reading this article! Please be sure to join the #Nerdherd, so you don’t miss out on any of the amazing things we have to offer at Dynastynerds.com. Use my promo code DynastyHolliday for a 15% off discount. You will get rankings, extra podcasts, and access to our rookie film room. For just a couple of bucks more, you can get access to our revolutionary DynastyGM tool. So much for so little. Why miss out on all the fun? Also, you absolutely must check out our new mock draft tool. Find it in your Apple & Android app stores. Follow me @ReflipeWThenuz for more dynasty content and other musings.