Next Man Up: Week 6 Injury Review

Its time to check in with the Doc. @ReflipeWThenuz offers up all the injury news you need for your dynasty squads. 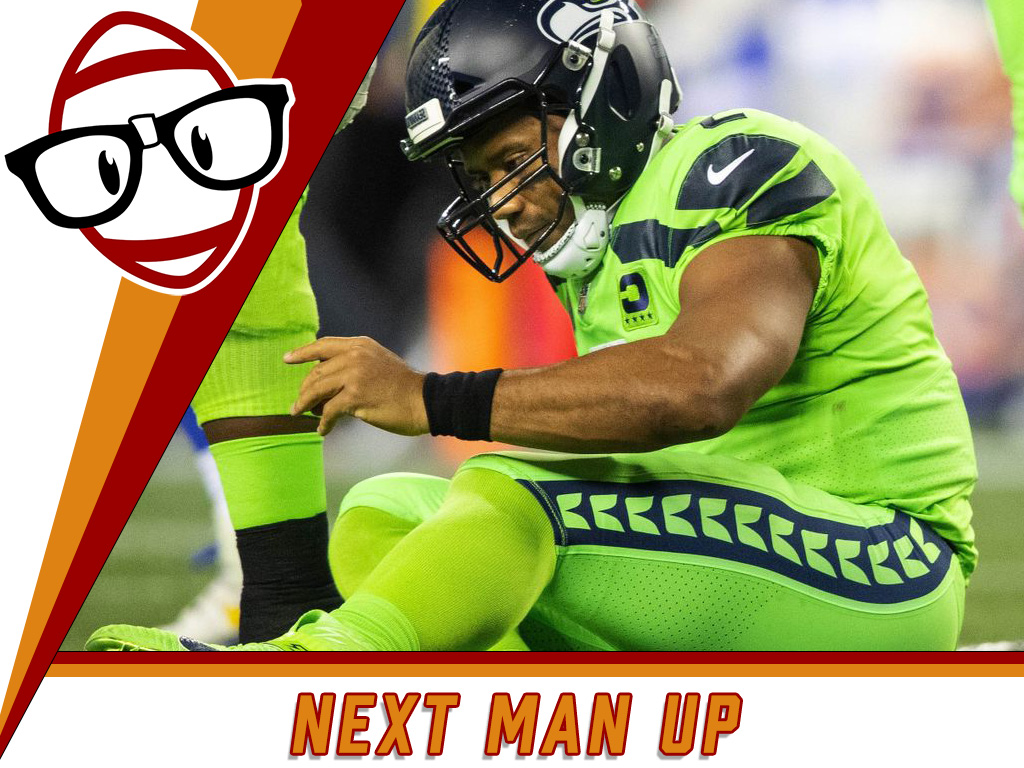 Each and every week, players across the NFL suffer injuries. This weekly article will explore the injuries that affect your dynasty squads. We will briefly discuss both the injured players themselves and the players who stand to benefit or suffer as a result. To make them easier to follow, we will break down the injuries by division. Without further ado, let us examine the Regular Season Week 6 injuries and the next men up.

The AFC East escaped Week 6 without any significant fantasy-relevant injuries.

Indianapolis WR Parris Campbell suffered a serious foot injury in his team’s Week 6 victory. The talented speedster had only just returned from a previous ailment. He made his presence felt with a single big play before going down. Early indications from the team are that the injury is somewhat serious and will cost the former Ohio State standout some serious time. There is even some fear that he will miss the rest of the season. Head Coach Frank Reich declined to give specifics, but this has the feel of a lisfranc injury. With veteran WR T.Y. Hilton going down with an injury of his own, more on that momentarily, the team will be forced to look to their depth moving forward. Zach Pascal and Mike Strachan will be the next two men up on the depth chart.

Indianapolis WR T.Y. Hilton sustained a quad injury late in his team’s Week 6 victory. The veteran leader was making his season debut in this one before the late exit. Early reports don’t seem to indicate this being a major issue moving forward. As with teammate Parris Campbell, Zach Pascal and Mike Strachan would be the next men up if Hilton misses time. However, with Campbell looking at a potential season-long injury, it would not be surprising to see Indy explore the free-agent market if Hilton were to again miss game action.

Houston WR Chris Conley suffered a neck injury in his team’s Week 6 loss. There has been very little information out of Houston about the severity of the ailment. With the Texans slogging their way through a rebuilding effort, it would not be surprising to see the team tread lightly with an injury of this nature. Fortunately for Houston, Week 6 also marked the return of WR Nico Collins, who would be the primary beneficiary of a Conley absence. Nico would be the WR2 running alongside target hog Brandin Cooks. Chris Moore would be the other most likely beneficiary of a Conley absence.

Titans WR Julio Jones suffered a hamstring injury in his team’s Week 6 victory over the Bills. The future Hall-of-Famer has endured a rough patch of soft tissue injuries in recent seasons. 2021 seems to be no different as he has already missed multiple games this season. With an MRI on tap, plan for Julio to be out for multiple weeks yet again. If he does indeed miss time, the Titans will turn to Chester Rogers and Nick Westbrook-Ikhine. In all likelihood, AJ Brown will operate as a target vacuum with a sprinkling to the other pass catchers as Derrick Henry carries the team on his back.

Cleveland QB Baker Mayfield suffered a left shoulder dislocation in his team’s Week 6 home loss. The former no.1 overall pick has been seemingly banged up all season. In particular, this is the same shoulder in which he tore his labrum in Week 2. After the game, Baker said, “It feels like s**t” when asked about the ailment. With a short turnaround before Denver comes to town for Thursday Night Football, Baker’s availability is very much in doubt. If he can’t gain clearance ahead of the game, Cleveland would turn to Case Keenum. While Case is certainly a capable backup, it would be a downgrade for the Browns receiving targets. Keep an eye out for news on Baker’s progress.

Cleveland RB Kareem Hunt suffered a significant calf injury in the team’s Week 6 loss to the Cardinals. Hunt has been one of if not the best no.2 RB in the entire NFL. He and Nick Chubb form quite possibly the best 1-2 punch in the business. The injury was severe enough that Hunt left the field on a cart. Following Monday’s test results, the team has placed Hunt on IR, meaning he will miss the next three weeks at a minimum. With Nick Chubb dealing with his bulky calf, which cost him Week 6, the Browns will have to turn to D’Ernest Johnson and Demetric Felton on the short week.

Cleveland WR Odell Beckham suffered a minor shoulder injury in his team’s Week 6 loss. OBJ was eventually able to return to the field after missing a decent amount of the first half. Cleveland could need to lean on their WRs with the RB room significantly banged up on a short week. If OBJ is unable to go, the team will turn to Donovan Peoples-Jones, Rashard Higgins, and rookie speedster Anthony Schwartz.

Baltimore RB Latavius Murray suffered an ankle injury in his team’s Week 6 victory. The nominal starter, Murray, has been a yeoman type play for your squads as he eats touches and has actually scored a decent amount of TDs to date. The Ravens have not indicated it is a major injury, and it sounds like he will be ok moving forward. However, if he were to miss time, look for Baltimore to lean on their other veteran RBs Devonta Freeman and Le’Veon Bell, in his absence. Ty’Son Williams may also get back into the action following his head-scratching absence from the game plan in recent weeks. Be on the look for information out of Owings Mills about Murray’s status throughout the week.

KC WR Tyreek Hill sustained a quad injury in the team’s Week 6 victory. He could play through the ailment, but it could be a situation to monitor going forward. Hill is quite possibly the fastest player in the league, and any limitation to that skill could spell trouble for the diminutive dynamo. Coming off a week in which he barely practiced due to said quad issue, you can expect much of the same ahead of a Week 7 matchup with the Titans. If, for some reason, Tyreek is unable to suit up, the Chiefs would turn to Mecole Hardman, Demarcus Robinson, and Byron Pringle. All-Pro TE Travis Kelce would also take on a few added targets if Hill is unable to go in Week 7.

Dallas QB Dak Prescott suffered a calf injury on the final play of his team’s Week 6 victory. The MVP candidate has been lights out this season following his return from a gruesome broken ankle in 2020. With a bye week on tap, the timing couldn’t be better for Dallas as their franchise signal-caller will get an extra week to rest up. However, if he cannot get back in time for Week 8 against the Vikings, the Cowboys would be forced to turn to Cooper Rush or Will Grier. Needless to say, that would be a downgrade for every Cowboys pass catcher and a boost in attempts for Ezekiel Elliott. This will be a situation to monitor through the bye and into Week 8.

Giants WR Kadarius Toney suffered an ankle injury in his team’s Week 6 loss. The dynamic 1st round pick was coming off of a breakout performance heading into this game. Early indications are that this may be a bit more serious than a simple sprain. While there are no indications that surgery is required at this point, the team will likely be cautious with their talented WR, with the season already in danger of being a lost cause. With fellow WR Kenny Golladay already on the shelf, the Giants will be forced to lean heavily on Sterling Shepard. Shepard garnered an incredible 14 targets in this game following Toney’s departure. The Giants would also line up Brittan Golden, John Ross, and Collin Johnson with the hope of getting back fellow WR Darius Slayton from his own injury. Outside of Shepard, this has the looks of a situation to avoid in the coming weeks.

WFT RB Antonio Gibson was forced from his team’s Week 6 loss with a shin injury. The talented playmaker underwent an MRI on Monday. The severity of the injury has yet to be revealed. However, sources have indicated that Gibson will likely miss some time with this issue. If he does, in fact, miss game action, the WFT would turn to a combination of Jarret Patterson on early downs and J.D. McKissick on passing downs. McKissick, in particular, could be a nice play in ppr leagues, with either player being a worthy play in the current depleted state of the fantasy RB landscape.

Giants WR C.J. Board suffered an arm injury in his team’s Week 6 loss and was carted off the field. Well off the fantasy radar, this one will not likely affect any of your dynasty teams. However, this is yet another injury to a Giants pass-catching corps decimated by injuries.

Carolina WR Terrace Marshall Jr. suffered a concussion in his team’s Week 6 loss. The talented rookie has struggled to make an impact to this point in his first NFL campaign. With DJ Moore and Robbie Anderson manning the top two spots in Carolina, the targets have been hard to come by. If Marshall cannot progress through the league’s concussion protocol ahead of his team’s Week 7 game against the Giants, look for Carolina to turn to Alex Erickson and fellow rookie Shi Smith to man the 3rd wr spot.

The NFC North emerged from Week 6 healthy from a fantasy standpoint.

LA Rams RB Jake Funk suffered a hamstring injury in his team’s Week 6 victory over the Giants. The young reserve had seen limited action behind Darrell Henderson and Sony Michel. After testing revealed a torn hamstring, the team placed the youngster on season-ending IR. This should not affect your dynasty squads but is a note to file away moving forward if anything happens to the oft-injured Henderson or Michel.