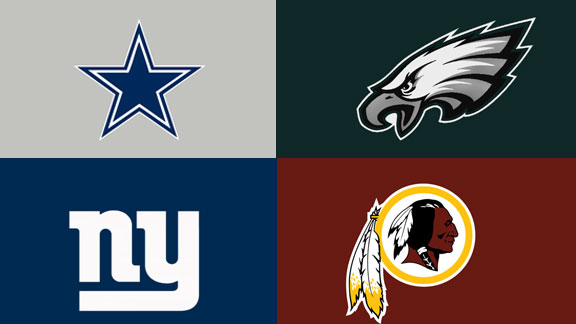 The NFC East saw an influx of potential dynasty gold welcomed into the NFL this past weekend. Some of the top prospects at their respective positions landed in spots that are primed to yield a positive return for dynasty owners for years to come. Let’s take a look at some of the winners.

Many analysts had mocked Josh Jacobs to the eagles for months, but when they traded for Jordan Howard that seemed to end that potential pairing. Draft weekend saw the Eagles instead opt for Penn State stud Miles Sanders; who some ranked higher than Jacobs all along. This is a great fit for him in an RB friendly system. I am not worried about Jordan Howard’s presence in the backfield. If anything, I think it will be good for Sanders and allow him learn the game and keep him fresh. I wouldn’t be shocked to see a changing of the guard closer to the end of the season. Dynasty owners may have an opportunity to buy low on Sanders from an owner worried about his carries to start the season; 2020 should be wheels up for Miles if not sooner.

Dynasty Value – Sanders is still a 1st round rookie lock and I can see him going inside the Top-3. If someone wanted to take a shot on his as the #1 pick outside of superflex leagues I wouldn’t argue against it.

Philly wasn’t done as they also drafted former Stanford standout Arcega-Whiteside. The Eagles offense looks primed to thrive for the present and in the future. JJAWs will have an opportunity to play with one of the bright young QBs in the NFL and a creative play caller; all while learning the substiles of the position from a WR with a similar build as him in Alshon Jeffrey. He should be an instant weapon in the red zone at worst during his rookie campaign. With all of the offensive talent on the Eagles roster, JJAW should be afforded single coverage and in the red zone I’d bet my money on him to win that battle.

Dynasty Value – His dynasty value right now should be a late 1st or early 2nd round rookie pick at the absolute latest, he is a potential plug and play WR2 for the Eagles and at potential WR3 as a rookie in fantasy.

Haskins took a bit of a dive during the draft watching two QBs come off of the board before him. However, he landed with a team that needed a QB and when healthy boasts one of the best offensive lines in football. Pair him with a backfield mates Derrius Guice, Adrian Peterson and Chris Thompson, this seems like a great fit.  Washington upgraded their passing weapons this past weekend as well with the additions of Kelvin Harmon and Terry McLaurin. Haskins might be the key to unlocking first round disappointment Josh Doctson and the up and coming Trey Quinn. A healthy Jordan Reed and Paul Richardson would surely help too.

Dynasty Value – Haskins is locked into the 1st round of superflex drafts. In 1QB leagues I wouldn’t spend over a late 2nd on him at the earliest.

Pairing McLaurin with his former college QB was a wise move by Dan Snyder. McLaurin made a name for himself during the pre-draft process with a very impressive senior bowl and a strong combine showing. He and Haskins should have instant rapport and his ability to play outside in will only add to his value. There are a couple of names on the roster he may have to beat out for significant snaps in his rookie year; 2020 might be a better time to buy scary Terry.

Harmon completely bottomed out of this draft. Once seen as a top prospect at the position he wasn’t draft until the 6th round. However, I think this is a fantastic spot for Harmon who will be paired with rookie QB Haskins. Harmon has a chance to become the best WR on this team sooner rather than later. The redskins needed weapons on the outside and they got them in this draft. The arrow is pointed up on Harmon despite is late round draft capital.

Dynasty Value – This could be great for dynasty owner who loved Harmon, once viewed as a lock for the 1st round of rookie drafts, Harmon probably won’t be selected until late 2nd at the earliest, if he’s sitting in your draft room then or early in round 3, draft him with confidence.

I know most won’t like this but he is a QB with extremely high draft capital. He is playing on an offense with Saquon Barkley and more than capable pass catchers. Eli’s best days are behind him and if the Giants continue to play bad, chatter for the first-round pick will gain considerable steam. I’m not a fan of Jones, but he is an athletic QB that will get a shot sooner rather than later and for that he has to be consider a winner.

Dynasty Value – In superflex leagues Jones has to be a 2nd round rookie pick at the latest. Love it or hate it, QBs are king in that format and if you can acquire a starter with those type of weapons around him, he is valuable.

This season will mostly likely been used as a redshirt year for Love. He joins an extremely crowded backfield of Derrius Guice, Adrian Peterson, Chris Thompson and Samaje Perine. Love is still recovering from an ACL injury he suffered last season and Washington has no reason to rush him back to the field. Love is a talented runner that has battled his fair share of injuries over is career. If he can return healthy he may make a formidable pairing with Guice. He just does nothing for your team now.

Dynasty Value – Right now given his landing spot and injury it’s hard to envision a world where Love is selected any higher than the 3rd round. Even then, that might be too much.

Weber was the 2nd RB drafted by Dallas this past weekend. The Cowboys selected Tony Pollard who should work as the change of pace back in Big D. Weber showed better than anticipated burst and speed at the combine and has the build and profile for 3-down back potential. He will not get that in Dallas. Weber has a chance to slide into the #2 RB role for Dallas which is valuable as they have one of the best offensive lines in football. They also have arguably the best running back who stays incredibly healthy. Weber will have little to no fantasy impact as a rookie or in the foreseeable future.

Dynasty Value – UDFA. Weber should be viewed as a high-end handcuff for dynasty purposes that you shouldn’t have to spend any draft capital on. If you can get him off your waiver wire and stash him away, you’re just hoping for a Zeke injury and nobody wants to see that.

Slayton’s game is predicated on speed. Eli nor newly acquired Daniel Jones boast the arm strength to get him the ball where Slayton fits best.

Dynasty Value – UDFA. This is not a good landing spot for Slayton. Even if he lands the field stretching role, he would be 5th on the receiving pecking order at best behind, Barkley, Engram, Shepard, and Tate.