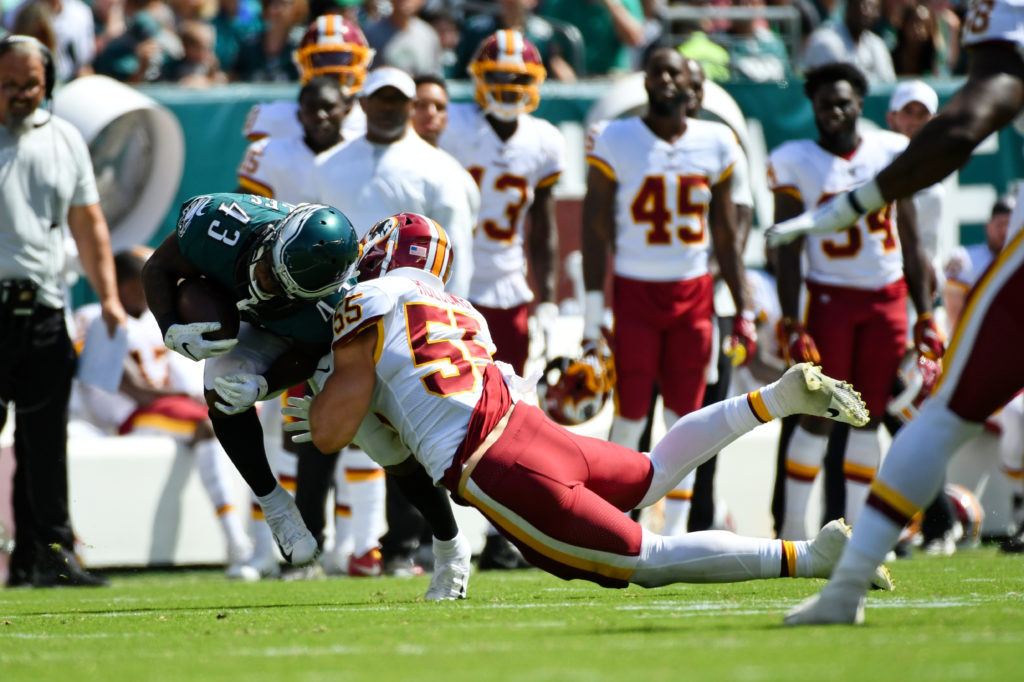 Snap counts are a great indicator of player progression and usage. Production doesn’t always follow, but for the most part, the two are synonymous. This can present a buy low or sell high opportunity, when a player has a high snap count and low production, and vice versa. Snap counts are a great source of information to gain an edge over league mates who don’t pay attention to player usage and snaps, and only the box score. I will be putting two articles out weekly breaking down the AFC and the NFC. I hope you enjoy!

Reddick saw his snaps increase in week 2 and posted 5 solo and 3 assisted tackles, 1 tackle for a loss and a pass defense. The uptick in usage is what owners have been awaiting. He looks to be a viable LB3 going forward.

Jarrett is arguably the most underrated interior defensive lineman in the entire NFL. Week in and week out he continues to dominate. In DT required leagues, where I don’t already own him, he is one of my top trade targets.

As described in last week’s article, Jones saw an uptick in snaps in week 2 and logged the most playing time of any of the Falcons LBs. He is an elite LB1 and should produce as such going forward.

The Falcons used 3 safeties a lot in week 2. It had been rumored all preseason that Kazee would be used a lot in this regard. We didn’t see it in week 1 but it seems that Atlanta had a change of heart which lead to Kazee posting 8 total tackles versus the Eagles. This is a situation to monitor in week 3, if his usage is similar to that of week 2 he could have value going forward.

Burns saw an increase in snaps week 2. He is my favorite Panthers DE going forward and is sure to be a star in the NFL for years. He could arguably be the best pass rusher the Panthers have had since Julius Peppers was in his prime.

As his contract suggests, Lawrence is one of the premier pass rushers in the NFL. Although Lawrence’s snaps returned to form, his stat line did not reflect his increase in usage in week 2 as he put up a goose egg for his owners. Due to Lawrence starting the season slowly, I would kick the tires on him and see if you can acquire him in a trade. Robert Quinn will be back this week and the Cowboys just surprisingly released Taco Charlton.

This is now the second week in a row where Flowers’ snaps haven’t eclipsed 60%. After coming over from New England, Flowers missed time this preseason with a shoulder injury. This wouldn’t typically be a cause of concern, except this is the same defense under coach Patricia that he was in while he was a Patriot. With a total of 2 solos and 1 assisted tackle through two weeks, he is someone that I would try to sell unless you are a deep believer in his talents.

Tavai was one of my “man crushes” throughout the offseason, and he has been making the most of Jarrad Davis’ absence. Tavai had a great performance in week 2 with 6 solo and 2 assisted tackles, 1 tackle for a loss and 1 forced fumble. It may take a lot to pry him away from his owner, but I would try before that window closes.

Walker, the man is absolutely tearing up the IDP world right now. Through two weeks he is the top scoring safety, and in the top 10 for all IDP, in the league. If you were able to snag him this offseason, or after reading last week’s article, then you have reason to celebrate. He will remain a stud all season.

Goodson saw his first action as a Packer in week 2. Though he didn’t blow anyone away with his box score, it was good to see him getting familiarized with the Green Bay defense. He is not someone I am targeting, but he could come in handy in best-ball leagues or as an injury/bye week fill in.

Well, I was wrong about Weddle’s in last week’s article, he also posted good numbers. However, I think that he is still someone I would move off due to age and the drafting of Taylor Rapp along with Rapp’s increase in snaps.

Another solid week for the Rams LB. I wish he had the DE tag, but in leagues that reward heavily for sacks, he is a good LB3 moving forward.

Hunter is elite; he led the team in tackle production in week 2 and added another sack to his total on the season. If it wasn’t for Myles Garrett destroying the Jets 2nd and 3rd string QBs, more people would be talking about Hunter’s dominance.

This marks two weeks in a row where Barr has had fantasy viable weeks. Even as a Vikings fan, I would try to move off him in some sort of a package deal. The main reason for this is that I am not a fan of starting LBs that aren’t WLBs or MLBs, and his inconsistent performances have burned me in the past. I will hand it to him though, he has had a great start in 2019 notching 12 total tackles and 1 sack through 2 weeks.

With all of the attention going to Cam Jordan and the referee debacle, most have missed Hendrickson’s red-hot start to the season. The 3rd year DE is seemingly having a breakout season after registering his 3rd sack of the season. He leads the Saints in sacks through two games and is someone that I would look to stash to see if the production continues.

Anzalone seems to have wound up on IR after his week 2 performance. The likely beneficiary is newly acquired, Kiko Alonso. I would suspect that he and Davis will lead all Saints LBs in snaps by seasons end.

Though not on the inactive or injury report for week 2, Davis didn’t log a single snap. Ryan Connelly (84%) was the beneficiary of the remaining snaps and had a decent game. Neither is currently on my radar.

Golden seems to be the Giants primary pass rusher for the season, when healthy he has always produced. After having a less than desirable performance in week one, Golden showed up with 6 combined tackles and a sack. He could be useful to spot start in good matchups, but nothing more until the Giants prove to be more competitive.

Hill filled in for Tedric Thompson as he was out with a hamstring injury. His performance wasn’t great, and there are rumors of him challenging Thompson for his role even when he returns. I have a feeling this will turn into a committee and is a situation I would avoid entirely.

Ford missed the 2nd half of the game this week due to a knee injury. He didn’t practice Wednesday either. Ronald Blair had a 5 combined tackle along with a sack in his absence. Ford might be one of the biggest IDP disappointments of the season thus far.

Minter filled in for Devin White when he went down on Thursday with a knee injury. It is unknown how long White will be out as he hasn’t practiced this week. During his absence, Minter is a good start.

Barrett has been one of the most pleasant surprises of the season for the Buccaneers. Barrett had a 3-sack performance in week 2, bringing his season total to 4. Once again, Barrett is another sack dependent LB. If you are in a league that rewards sacks heavily, he looks to be a great pick up as in JPP’s absence the Buccaneers are desperate for a pass rush. Note that Barrett is the only Buccaneer to have a sack this season.

The rookie seems to have taken the starting job from the 31-year-old vet, Darian Stewart. He is rosterable, but not startable at this point in the season.

Holcomb out-snapped Jon Bostic in week 2 and looks to be the team’s number one LB going forward. It is unlikely that he is on waivers, but if he is, he is a must add.

The rookie is yet to produce but seems to be well entrenched in the Redskin’s game plan. He and Kerrigan are the team’s primary pass rushers.