With the NFL Draft in the rearview mirror @50shadesofdrunk breaks down the defensive backs to keep an eye on for your IDP teams. 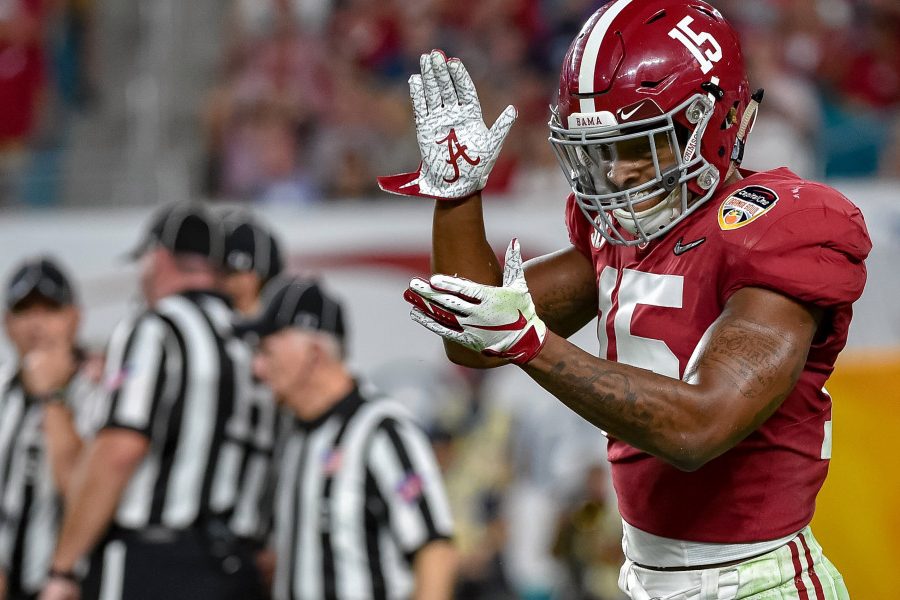 Because of the nature of where most IDP points come from in IDP fantasy football leagues, this breakdown won’t focus on the cornerbacks (CBs) drafted. A few anecdotal concepts and strategies are surrounding the CB position in IDP, and one of them is that rookie corners will often be targeted or picked on by quarterbacks. Therefore boosting their value. There isn’t much evidence to truly support this, but if you take it a bit deeper and target rookie CBs who have high draft capital and will be playing across the field from proven veterans, this strategy can be successful.

Often it comes down to snaps and who a CB is asked to cover, which can dictate his fantasy relevance and as those can change weekly. It can be a tough position to navigate in IDP, given various degrees of uncertainty. Safeties though, are a bit more of a straightforward position in IDP and, as such, can be understood, analyzed, and strategized around a bit more. That’s where most of the focus will be.

The Giants got a versatile defensive weapon with their first pick in the second round with Xavier McKinney. It also isn’t the first Alabama safety to be drafted to the Giants. IDP standout Landon Collins also played college ball at Alabama and also began his NFL career with the Giants.

McKinney spent considerable time in the box, playing corner and high safety in college and proved adept in all three areas, especially at high safety. McKinney only gave up two first-down receptions in two years from the high safety position. He was also proficient as a blitzer with over 20 pressures since 2018.

With the off-season departure of IDP tackle machine Antione Bethea, McKinney is poised to see meaningful snaps almost immediately in tandem with incumbent strong safety Jabrill Peppers. On paper, the Giants now have one of the more intriguing safety tandems in the NFL from an upside standpoint.

Small school standout Kyle Dugger may have been the most aggressive riser of the draft season at any position. Dugger went to North Carolina’s Lenoir Rhyne College. He had zero Division I offers and didn’t have a chance to get in front of many NFL scouts’ eyes until the Senior Bowl. But he was one of the most talked-about players at the Senior Bowl in 2020. Dugger is a physical specimen with elite speed and a big hitter with his tackles. The level of competition he played in college wasn’t up to the same level as many of his contemporaries. Still, his instincts and playmaking, even against lesser competition, were so dominant that the New England Patriots made him their first pick in the 2020 NFL draft and the second safety of the draft.

Along with his extreme explosiveness, Dugger also boasted the biggest hands and longest arms of any safety at the combine. Patrick Chung, the Patriots decade long starting strong safety, will be 33 years old at the start of the 2020 season. Kyle Dugger figures to fill that role going forward and will be an essential piece of the Patriots rebuild. It’s hard to project Dugger as a 100 tackle strong safety. Chung never hit that mark as with the Patriots but Bill Belichick is notorious for honing in on a player’s strength and tackling is one of Duggers. It’s easy to envision Dugger as a 75 tackle a season DB2 option for IDP fantasy football teams once he gets on the field. Similar to Tyrann Mathieu.

How bout them Tigers? There were 14 LSU football players drafted in the 2020 NFL draft, which ties for the most from a single college team in one draft. An incredible group of players came out of LSU this season, and the Cleveland Browns landed a solid safety prospect in Grant Delpit. For the Browns, it fills a glaring hole on the team with little to no safety depth on the roster and adds another talented LSU defensive back to play alongside 2019 second-round pick Greedy Williams. The good thing about Delpit for IDP fantasy football is he has a very easy road to snaps, but unfortunately, his biggest knock as a prospect is his lackluster tackling.

Delpit, however, is excellent in coverage, which is probably why the Browns were so eager to take him. In their division, it’s crucial to have a safety that can play well in coverage. Big bodied receiver Juju Smith-Schuster and breakout TE Mark Andrews play in that division and have made easy work of the Browns in the past. The Browns focused on defense in this draft, and Delpit was their cornerstone piece. Probably not an elite IDP producer but could have big weeks. Minkah Fitzpatrick numbers are probably his ceiling.

The Buccaneers were in desperate need of a playmaking safety as they struggled to be productive and stay healthy in 2019. To address the need, they drafted one of the more aggressive playmakers at the position in this draft. Antoine Winfield Jr has NFL pedigree and was highly productive in college, posting 83 tackles and 7 interceptions his senior year. His father, Winfield Sr was a 14 NFL veteran, drafted just one season before Tom Brady. His son’s new teammate and quarterback.

With the complete wasteland at the position, Winfield should have a chance to step into an immediate starting role. The Buccaneers defense was highly disruptive in 2019, producing a lot of high-level IDP fantasy football assets but was not good at stopping drives. With an upgrade in the backfield like Winfield, who can be successful in coverage, the Buccaneers could be a sleeper defense overall in 2020. Winfield’s aggressive playstyle and ballhawk skills make him a high upside defensive back rookie.

Matt Rhule is the new Head Coach of the Carolina Panthers. Last season Rhule was the HC of Baylor and, as such, has had his eyes on a lot of the incoming prospects a lot longer and more up close than most. With his 3rd pick in the draft, he chose Jeremy Chinn, an athletic, small school safety. Chinn, like Dugger, was a standout at the Senior Bowl and started shooting up draft boards after his combine performance. Pro Football Focus called Chinn a “late-round project” at best, but NFL coaches and GMs told a different story. Chinn’s second-round draft capital told the final story.

“I know you want Isaiah Simmons in the Draft. Everyone does. But unless you’re a top 10 team, you’re not getting him. The guy I’d start taking a look at is @ChinnJeremy2, a 6’3 safety out of @SIU_Football, who’s also a beast that can be used in a variety of ways.” — @PSchrags pic.twitter.com/CIs3QVAUlH

The Panthers let go of top 3 IDP defensive back Eric Reid this offseason, and he leaves well over 100 tackles at the safety position behind. Chinn should immediately walk into the role left behind by Reid and has all the physical tools to be successful. He should be firmly on your radar in rookie drafts if your team needs DB help.

As stated above, this won’t be a deep dive into the cornerback class. Because of the somewhat unpredictable nature of the position, you, like many IDP managers, probably choose to stream the position. But just here are some of the relevant cornerbacks in this year’s class with high draft capital.

This wasn’t a super deep draft as far as defensive back prospects. But the teams and roles the players found themselves drafted into were, overall, promising for IDP fantasy football managers. If your team needs an immediate producer, several players in this season’s rookie drafts have the makings of the next big thing at DB.