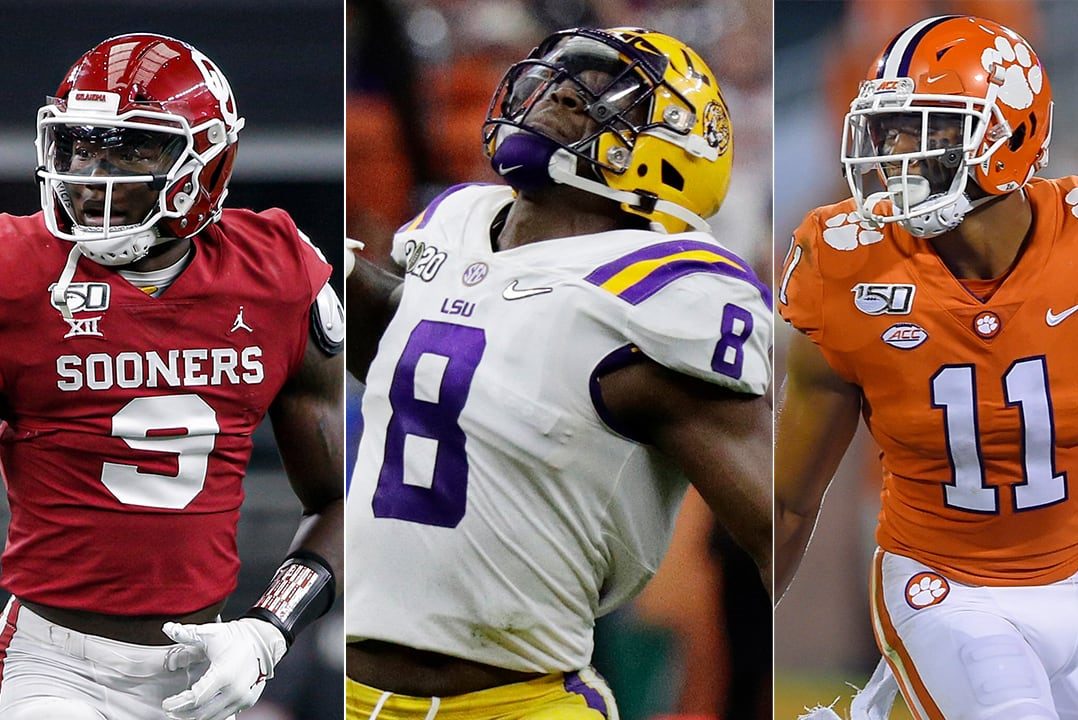 The IDP team at Dynasty Nerds continues to keep you ahead of the competition with their breakdowns of each position from the NFL Draft. Let’s dive into the LB position and their values in dynasty leagues going forward.

The landing spot could have been better, but from a team standpoint, the pick was perfect. The Cardinals ranked 32nd in total defense in 2019. Isaiah Simmons can be used all over the field, and the Cardinals defense has playmakers all over that defense. The most intriguing piece will be the designation he receives. There is a very good chance Simmons is a day one starter at safety, but with his skill set, he can do just about everything on defense, which should lead to more fantasy points.

Chaisson is an absolute nightmare off the edge with his first step and bend. The Jaguars arguably could switch to a 3-4 defense, but that is very unlikely, which should give Chiasson a DE designation, and his value should skyrocket as a rookie. Josh Allen recorded 10.5 sacks as a rookie. After losing both Calais Campbell and Marcell Dareus in the offseason, Chaisson will likely be depended on as a big sack guy just as Allen was as a rookie. I would compare this situation in IDP leagues, much like Dante Fowler Jr. as an LB; there’s not much interest, but with a DE designation, his value increases drastically.

The Chargers were aggressive in moving up for the Oklahoma star LB who has the range and speed to handle the middle of the Chargers defense for years. The Chargers have lacked consistency and longevity at the LB position. With Murray now, they have a crucial piece who can help them improve their mediocre run defense from a year ago. Kenneth Murray joins Derwin James, Joey Bosa, and Jerry Tillery as the Chargers fourth first-round pick used on defense since 2016. The Chargers cut Thomas Davis and brought in Nick Vigil on a one-year contract with Denzel Perryman, also set to be a free agent after the season the rookie from Oklahoma will have to learn how to run the Chargers defense quickly.

The Seattle Seahawks have been buying time upgrading their LB core. It seems they finally have their guy in Jordyn Brooks. Four years of production and being able to learn from Bobby Wagner, who is one of the best in the game, gives him a big edge. The Seahawks are uncertain how many years left they have from the Wagner and K.J. Wright combo. The addition of Brooks improves their defense tremendously as they looked to improve their 26th overall finish in total defense last year.

The most sensible fit in the draft was the Baltimore Ravens addressing their need for an inside LB after losing C.J. Mosley, Patrick Onwuasor, and Josh Bynes over the past two off-seasons. Patrick Queen only had a one-year boom of production at LSU, but in that season, he helped lead the LSU Tigers to a National Championship. It is no secret Queen is undersized, but his instincts and range help him locate the ball and blow plays up from the LB position. The Ravens have failed to have an LB finish inside of the top 24 in two straight years there’s a big opportunity for Patrick Queen to change that in 2020.

The Kansas City Chiefs have needed an upgrade at LB for a few seasons. They have made it work with Reggie Ragland and Anthony Hitchens. The team decided not to resign Reggie Ragland or Darron Lee in the off-season and drafted Willie Gay Jr., who has size and speed to be a key contributor for the Chiefs. Anthony Hitchens finished as the LB14 in 2018 before dropping out of the top 50 in 2019. The former Mississippi State Bulldog has had off the field issues, but these players seem to fit perfectly into Andy Reid’s plan as he almost always gets the most out of the players he drafts. If the Chiefs are going to have a top 36 IDP linebacker anytime soon, I think Willie Gay has the best chance to be that guy.

Admittedly haven’t watched much Wyoming football over the past few years, but when you look at the numbers, Logan Wilson seems as good as advertised. The ten interceptions are what sticks out the most to me, along with the high tackle numbers. The Bengals have revamped their LB core, and Germaine Pratt will need a running mate for the future there’s hope Logan Wilson can take over for Nick Vigil and inject some life back into the Bengals LB core for some much-needed fantasy points.

The fall in the NFL Draft was surprising to most, but I believe it’s tied mostly to the one-year boom sack production as a senior at Wisconsin for Zach Baun. The former Wisconsin Badger had 12.5 of his 15 career sacks as a senior it’s likely the Saints will use him as a package specific LB to get after the passer. His lack of size leads me to believe he will struggle to play every down in the NFL, but his success as a pass rusher can bring value to your fantasy teams in the late rounds of a rookie or startup draft.

Nick Saban finds the way to get the most out of his players, which is what he did with Terrell Lewis, who finished 2019 with 11.5 tackles for loss and six sacks in only ten games played. The Rams have had a major overhaul to their team this year, and some thought a move to the 4-3 defense was possible, but with this Lewis pick, it proves it’s not. Brandon Staley takes over for Wade Phillips, Staley is young but has worked with some of the NFL’s best EDGE players in Vonn Miller and Khalil Mack. Terrell Lewis is going to slot into the Dante Fowler role in the Rams defense. How effective he will be at the next level remains to be seen.

Bill Belicheck loves smart football players even if they aren’t the most athletic, and that’s what the Patriots get here from Jennings. Four-year contributor at Alabama under Nick Saban, who has seen his numbers increase every season. Almost no relevance as an IDP producer, but he will be a good fit long term for the Patriots defense.

Greenard is a high motor guy who has produced for multiple schools in his college career. Jonathan Greenard fits in better as a 4-3 defensive end than a standup LB because of his lack of speed off the edge. However, his instincts and overall football IQ give him a chance to produce in the NFL. I would avoid him unless there is serious talk of him being given DE designation in your dynasty leagues.

The LSU Tigers never fail to produce NFL talent, and Phillips joins his teammate Grant Delpit in joining the Cleveland Browns. The Browns struggled to stop the run last year, which cost them a shot at winning many games after losing Christian Kirksey and Joe Schobert in free agency it was time to add more youth. While playing alongside Devin White in 2018 and then Patrick Queen in 2019, Phillips was still able to put up very productive seasons. It may be unlikely he finds a starting role or is given consistent snaps as a rookie, but if he can develop, he may be a year 2 LB prospect to keep on your radar.

The former Ohio State Buckeye saw his stock drop a bit due to the dip in production from junior to senior year. Regardless he’s still a very talented player. The Ravens add two young LBs to their defense to place two veterans while the leadership may be lacking, they have found two highly productive LBs from top tier college football programs. Malik Harrison has a chance to be a real sleeper in this class with losing two starting LBs this off-season it’s likely he sees enough snaps as a rookie to give him a chance to be relevant for fantasy production.

The undersized LB is the theme of the 2020 NFL Draft, and we have another one in Davion Taylor. The former Colorado Buffalo is a sure tackler which the Eagles need more than anything after they have yet to find a competent replacement for Jordan Hicks. The depth chart at LB is overall weak for the Eagles. It’s not out of the question the late 3rd round pick can see some quality opportunities in 2020.

The Cincinnati Bengals understand the division they play in and have drafted three productive college LBs in the past two drafts. Those new linebackers have the speed and range to match up with today’s NFL offenses. Akeem Davis-Gaither was the 2019 Sun Belt Defensive Player of the Year and had a career-high 5 sacks as a senior. ADG is a talented player who may have a chance in a year or two to be a starting LB in the NFL. If you’re picking him in your rookie draft, make sure you have deep rosters or a taxi squad spot open for him to sit for now.

The Atlanta Falcons LB core needs help outside of Deion Jones. After the loss of De’Vondre Campbell in free agency it is a very poor group. Mykal Walker played three positions alone last year at Fresno State, including inside and outside LB, he has a chance to compete for outside LB snaps even as a rookie. Anyone taken this late is likely a flier in your dynasty leagues, but the situation here should bump Walker up your rookie draft boards.

Troy Dye is one of the most underrated LBs in all of college football a year ago. Dye is a steal for the Minnesota Vikings. Troy Dye has nearly everything you’re looking for in the new age NFL LB and will get to learn in a Mike Zimmer defense under Eric Kendricks leadership. Troy Dye is the best of the late-round LBs in this class, and I do see him being a productive IDP at some point down the road.

Shaq Quarterman brings consistency and production to a Jacksonville defense, looking towards the future. Joe Schobert joined the Jaguars on a 5-year deal that could turn into a two-year deal with a potential out after the 2021 season. The former Miami Hurricane is a stash for now in deeper IDP leagues but could find a way onto the field with not much competition ahead of him.

Josh Uche – Drafted as DE by the New England Patriots according to ESPN but likely fits in as another stand-up OLB/EDGE. Uche will take time to develop, but likely Bill Belicheck gets another rotational smart LB. Very little chance he’s IDP relevant in 2020.

Justin Strnad – Brings height and solid awareness to a rebuilt Denver LB core. Wouldn’t count on him being fantasy relevant but a name to keep an eye on if a few injuries happen in front of him.

Kamal Martin – Strong tackler and a key piece to the strong defense for the Minnesota Golden Gophers in 2019. Unsure where he will be utilized if at all in Mike Pettine’s defense, but the guy can play and has the potential to contribute down the road.