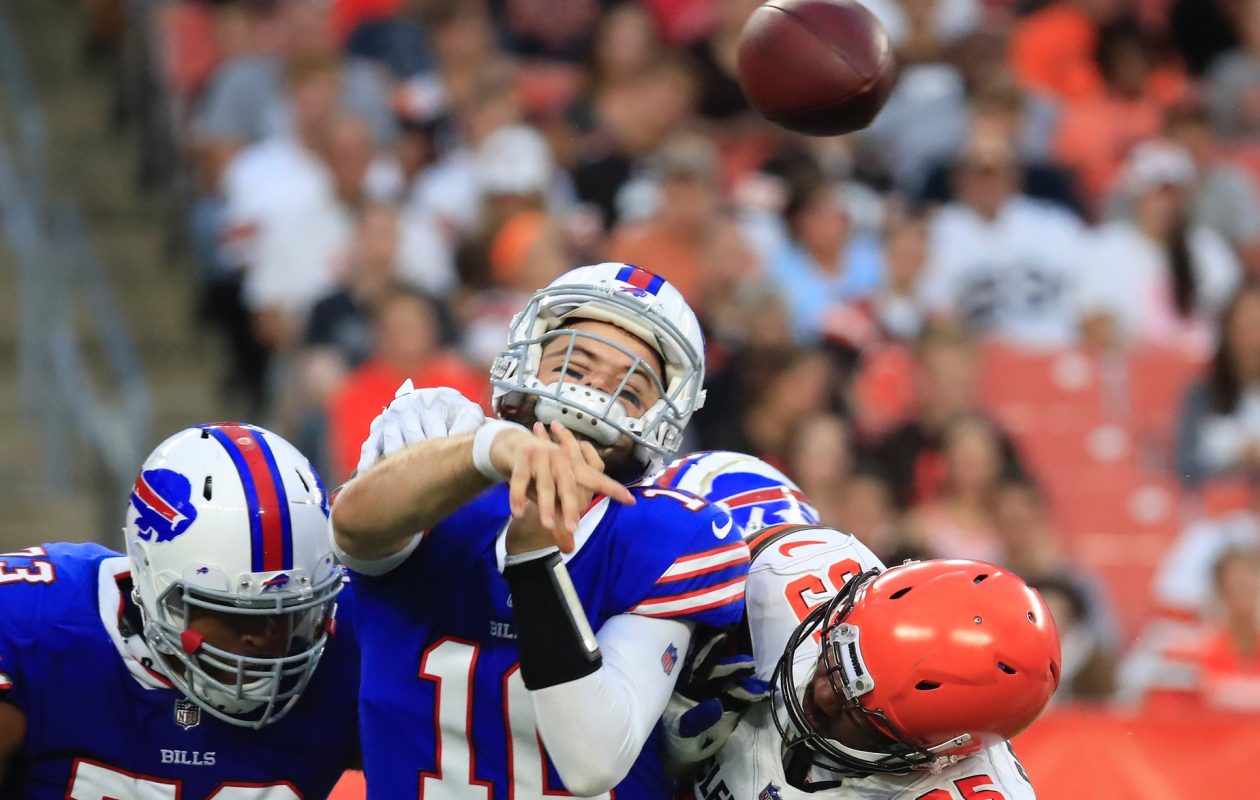 AJ McCarron, Buffalo Bills: The Bills starting QB situation seems clearer after Week 2 of the preseason, largely because of the fact that AJ McCarron went down with what was thought to be a hairline fracture in the collarbone of his throwing shoulder. However, after further testing, the Bills’ medical staff has determined there is no fracture in the collarbone. McCarron’s injury should be treated as a sprain and considered day to day. His injury opens the door for the rookie, Josh Allen, to run away with the starting job. Allen will likely handle the majority of first-team reps in the Bills’ third preseason game and figures to be the team’s starter Week 1.

Nick Foles, Philadelphia Eagles: With Wentz still recovering from offseason surgery to repair his torn LCL and reconstruct his torn ACL in his left knee, Nick Foles is expected to fill in as the team’s starter if Wentz isn’t ready for Week 1. Unfortunately, Foles injured his right shoulder against the Patriots when he dropped back for a pass and was hit on the follow through. His shoulder was in a vulnerable position (elevated away from the body and externally rotated), which is a position that can lead to rotator cuff injury. Fortunately, however, MRI results showed no structural damage, and the Eagles are reporting this injury is not expected to be serious. For now, this injury should be considered a sprain. Expect Foles to be ready for Week 1.

Jamaal Williams, Green Bay Packers: Williams sprained his ankle during the team’s second preseason game, but the injury is not expected to be serious. Reportedly, Williams was stating after the game that if it were a regular season game, he could have gone back in and finished the game. For now, monitor Williams’ reps in practice, but he does have a chance to be ready for the team’s third preseason game. On the other hand, the team would be smart to hold him out and prevent aggravation of this injury.

Samaje Perine, Washington Redskins: Like Williams, Perine also sprained his ankle during Week 2 of the preseason and was seen in a walking boot after the game. Reportedly, Perine is expected to miss at least one week, but he could be available for the team’s final preseason game. After losing Guice to a torn ACL and signing Adrian Peterson, the ‘Skins backfield is looking like a difficult one to predict for fantasy in 2018.

Jake Kumerow, Green Bay Packers: Kumerow has exploded onto the scene in Green Bay after two impressive performances in Weeks 1 and 2 of the preseason. For more info on Kumerow as a prospect, check out my guy Jon Diment’s (@DynastyJon) recent article. Unfortunately, Kumerow is currently dealing with a sprained SC joint, which is the articulation between the collarbone and the sternum. When sprained, this joint can affect shoulder mobility and leads to pain when elevating the arm overhead. Luckily, Kumerow’s SC sprain is considered a low grade, so he could return before preseason is over. It remains unclear if he makes the Green Bay roster.

Adam Shaheen, Chicago Bears: Shaheen suffered a right ankle injury during the team’s second preseason game and was carted off. His ankle got awkwardly planted in the ground as a defender tackled him low and was in obvious pain. Shaheen likely won’t appear again in the preseason and remains the obvious number two behind Trey Burton. However, Shaheen was having a strong training camp and was playing a lot in two TE sets, so he remains a guy to watch in dynasty.