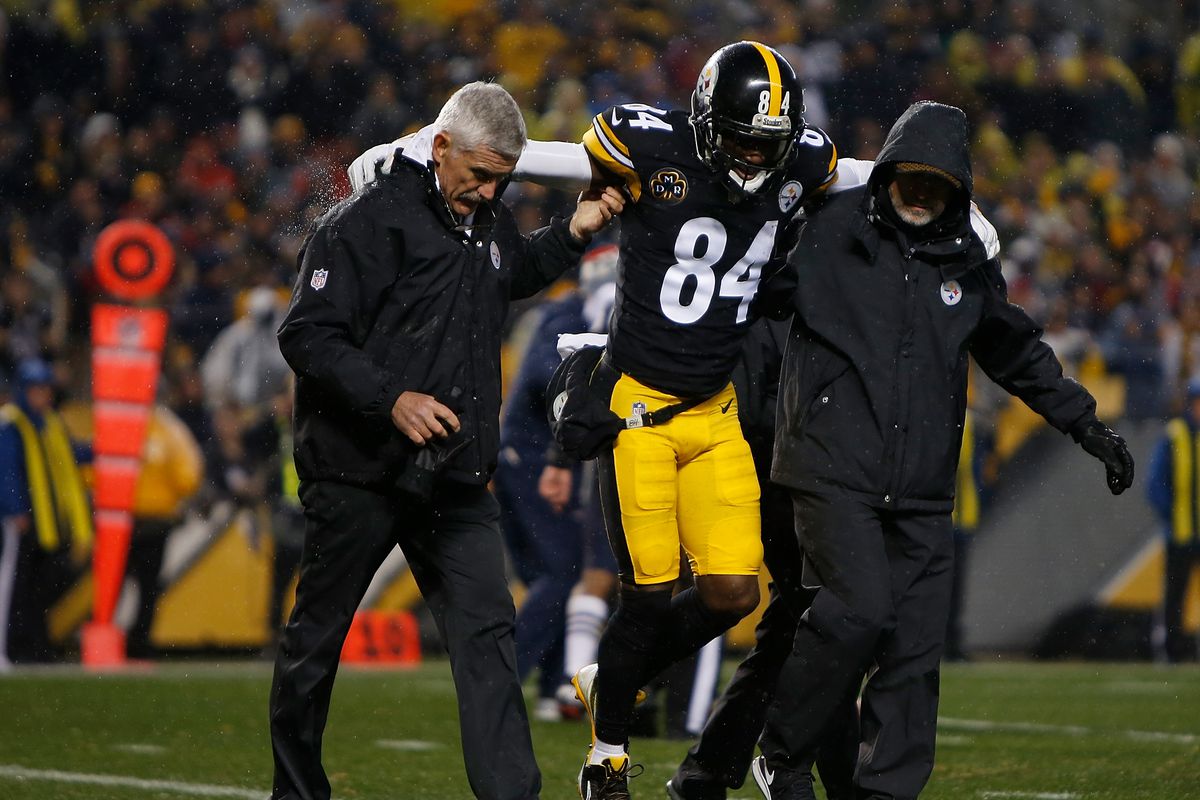 Marcus Mariota, Tennessee Titans – Mariota has been on this weekly article several times throughout the season due to a variety of nerve related injuries to his throwing arm and shoulder. He’s had a variety of injuries, including an ulnar nerve contusion affect his season thus far, but this week, he finds himself on the injury report with a stinger, which he suffered in Week 16 against the Redskins. A stinger is basically an acute, either compression or stretch of the bundle of nerves that exit the neck and go into the arm, and it can cause numbness, tingling, and even weakness for a short period of time. Typically, these injuries can recover within a week, but Mariota may not be so lucky. His history of nerve injuries earlier this season predisposes him to a longer recovery. Simply put, if Mariota does in fact play on Sunday night against the Colts, he will be at less than 100% and could play with a glove on again in order to help him with gripping the ball.

Tevin Coleman, Atlanta Falcons – Coleman is on track to play in Week 17 albeit at less than 100%. He injured his groin in Week 16 and exited early. The impending free agent didn’t practice on Wednesday or Thursday, but he returned to a limited practice on Friday. Head coach, Dan Quinn, confirmed that Coleman will suit up in what could be Coleman’s last game in a Falcons uniform. His groin strain, however, does carry a very high risk of reinjury. An early return to the field while battling a groin strain could result in Coleman disappointing fantasy owners if he gets pulled early due to his groin injury.

Phillip Lindsay, Denver Broncos – The Pro Bowl rookie won’t have a chance to play in Week 17 or the Pro Bowl due to the fact that he injured his wrist in Week 16. Lindsay fractured the scaphoid, a commonly injured bone, in his wrist and also suffered ligament damage. As a result, he recently underwent surgery to repair the ligament and stabilize the bone. He faces a 3-4 month recovery timeline and should be ready well in advance of training camp for 2019. Fellow rookie, Royce Freeman, will get a chance to prove what he can do with a full workload during the Broncos’ 2018 finale.

Leonard Fournette, Jacksonville Jaguars – Fournette is very unlikely to play in Week 17, as he’s listed as doubtful with ankle and foot injuries. It’s been a disappointing season for Fournette owners, has he’s battled injury all season, forcing him to miss 8 games. Worth noting, Carlos Hyde is also listed as questionable with a knee injury, so T.J. Yeldon may get a shot to prove he’s worth signing as an impending free agent in 2019.

Austin Ekeler, Los Angeles Chargers – Ekeler has missed the last 2 games with a stinger injury and a concussion. However, he was removed from the team’s final injury report ahead of Week 17. He should return to his back up role behind Melvin Gordon.

Todd Gurley, Los Angeles Rams – Gurley sat in Week 16 with a left knee injury sustained in Week 15, and a similar outcome is going to come in Week 17. Gurley didn’t practice at all this week and has been ruled out. With the Rams having their eyes set on the postseason, they’re smart to sit Gurley in order to have him at 100% for the playoffs. C.J. Anderson will once again be a strong play against the Niners on Sunday.

James Conner, Pittsburgh Steelers – Conner is listed as questionable, but I fully expect him to return from his 3-game absence after suffering a high ankle sprain in Week 13. Conner practiced in full all week, so he should be ready for Week 17 in what is a must win matchup for the Steelers against a soft Bengals defense.

Matt Breida, San Francisco 49ers – Breida has been ruled out with the same ankle injury that’s plagued him all season. Breida’s ankle injury will predispose him to future ankle sprains throughout his NFL career, so this is definitely a knock against him when it comes to dynasty value. However, he is expected to be fully ready for OTA’s in the spring.

John Brown, Baltimore Ravens – Brown has been largely healthy for the vast majority of the 2018 season, but he’s questionable for Week 17 with a hamstring injury. He didn’t practice on Wednesday but returned to a limited practice on Thursday and Friday, indicating he should be active. The speedster could easily aggravate his hamstring when trying to ramp up to full speed on a go route, making him a risky play in Week 17. Look elsewhere if possible.

Allen Robinson, Chicago Bears – Robinson is listed as doubtful for Week 17 against the Vikings with a ribs injury. He didn’t practice at all this week, so it’s very likely the team rests him in preparation for the playoffs. In a must win game for the Vikings, downgrade all other receivers for the Bears (Anthony Miller, Taylor Gabriel, etc.) against a tough Minnesota secondary.

Kenny Golladay, Detroit Lions – Golladay is listed on the injury report this week with a chest injury but is expected to play on Sunday. He returned to a limited practice on Thursday, putting him on track to be ready for the Lions’ season finale.

Devante Adams, Green Bay Packers – Adams has been unbelievable this season, posting double digit fantasy points in every single game this season. However, his status for Week 17 is up in the air, as interim head coach, Joe Philbin, told reporters “we’ll have to wait and see” regarding Adams’ knee. The Packers typically hold their final practice of the week on Saturdays, so don’t expect a final word regarding their #1 wide out until Saturday afternoon or Sunday morning. He hasn’t practiced at all this week.

Keke Coutee, Houston Texans – Coutee has been battling a hamstring strain all season and remains questionable heading into their Week 17 game against the Jaguars. With Demaryius Thomas on I.R. with a torn Achilles, they could choose to sit Coutee in order keep him healthy for their playoff push. He practiced in a limited fashion all week and could once again be a game time call.

T.Y. Hilton, Indianapolis Colts – Hilton hasn’t practiced for the past three weeks, but it doesn’t matter. He’s been fantastic battling through a sprained ankle. How good has he been? From Weeks 14-16, he’s the WR7 in PPR scoring despite not practicing. Hilton will be ready for Sunday Night Football without reservation.

Odell Beckham, New York Giants – Beckham has been ruled out for Week 17, which is no surprise as he continues to battle his quad injury. He hasn’t practice at all over the past 4 weeks and hasn’t played since Week 13. Beckham will be one of my top bounce back candidates for 2019.

Antonio Brown, Pittsburgh Steelers – Brown’s status for Week 17 should truly be viewed as questionable in what is a must win game for the Steelers. Brown has been dealing with a knee injury, which forced him to miss practice every day this week. News also surfaced towards the end of the week that the team will perform additional tests on Brown. It’s unclear what exactly that means, but I presume they are getting an MRI to rule out any structural damage. Brown will be one of the top injury stories to watch all weekend.

Quincy Enunwa, New York Jets – Enunwa will miss Week 17 with an ankle injury that has forced him to sit in every game since Week 14. The injury is not expected to be serious given the Jets’ confidence in Enunwa. He recently signed a 4-year contract extension worth $36 million. Enunwa should be ready to roll for OTA’s in the spring.

Jermaine Kearse, New York Jets – Kearse won’t play in Week 17 with an Achilles injury. This is a smart move by the Jets, as Achilles tendinitis is nothing to mess around with. With Enunwa also out, the Jets will rely on Robby Anderson and Chris Herndon in the passing attack.

Doug Baldwin, Seattle Seahawks – Baldwin has battled a variety of injuries all season, and the same is true heading into Week 17. Pete Carroll told reporters that Baldwin will be a game time decision as he deals with a shoulder injury. It’s unclear what exactly is going on with Baldwin’s shoulder, but I do expect the veteran to play given that the Seahawks can improve their seed in the playoffs with a win.

Dante Pettis, San Francisco 49ers – Pettis suffered a sprained MCL in his knee last week and won’t play in Week 17. Pettis should be ready to roll for the team’s offseason training program.

Desean Jackson, Tampa Bay Buccaneers – Jackson will not play in Week 17, as he’s listed as doubtful with an Achilles injury. He didn’t practice at all this week, leaving the Bucs with Chris Godwin and Adam Humphries to play second fiddle to Mike Evans. It’s very likely we’ve seen the last of Jackson in a Buccaneers uniform.

Eric Ebron, Indianapolis Colts – Ebron left Week 16 early with a concussion but has a good chance to play on Sunday night. He didn’t practice on Wednesday but returned to practice on Thursday, which is a trend in the right direction. He has until Saturday afternoon to clear concussion protocol, so look for a final decision regarding Ebron’s status well ahead of their must win Sunday night game against the Titans.

Jared Cook, Oakland Raiders – Cook practiced all week in a limited fashion because he’s been dealing with an injury to his ribs. However, he’s been removed from the team’s final injury report and is a TE1 in Week 17.

Jordan Reed, Washington Redskins – Reed was placed on injured reserve earlier this week, and he won’t play in Week 17. This isn’t much of a surprise given his injury that he suffered a few weeks ago. Worth noting, Reed underwent offseason toe surgery this year, so this is something that could easily turn into a chronic issue for the oft-injured tight end. Vernon Davis will also sit in Week 17 with a concussion, leaving Jeremy Sprinkle to start for the Redskins.

Penny Stocks: Players To Buy Cheap Before Free Agency
Why you should buy high on Patrick Mahomes