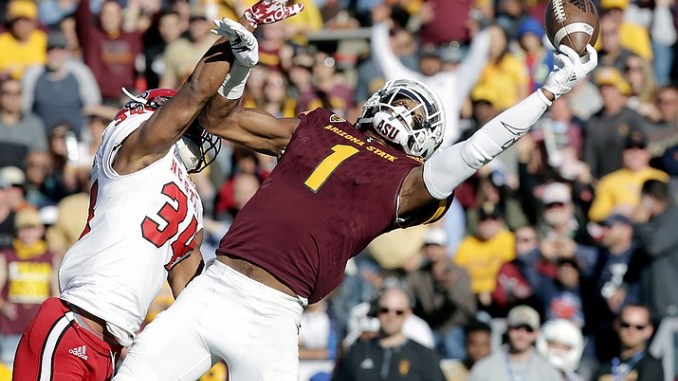 It’s still early, but I absolutely adore N’Keal Harry. So, prepare for a 400-word lap dance.

The guy can do it all. He has all the makings of a dominant WR1. I’ve heard rumblings of people concerned with his ability to separate and whether or not he’s too sluggish to succeed in the NFL. I don’t see that at all. In recent years, there has become some disdain for the ‘bigger’ receivers. Ever since Laquon Treadwell, everyone is concerned that the bigger guys are going to be the next Kelvin Benjamin. They’re constantly looking for holes when talent may be staring them in the face. The likes of Antonio Brown and Tyreek Hill’s recent success, lead people to look for niftier, reception YAC monsters. Personally, I have zero concerns with Harry and fully believe he will succeed at the next level.

I’ve been a big fan ever since he broke out at a young age with Arizona State, as a Sophomore. Declaring after his Junior season Harry has had back to back seasons over 1,000 yards, catching passes from Manny Wilkins. His Sun Devils production can be seen below:

As previously eluded to, N’Keal Harry’s size is a huge strength. Measuring in at 6’4” 215 pounds, Harry is a great jump-ball receiver. It doesn’t hurt that his hands are absolute mits too. He can reel in absolutely anything and has solid, steady hands. Harry Houdini will catch absolutely anything:

Even at his size, he’s a YAC beast. Ask yourself, could Kelvin or Laquon do this?

He’s quite agile for such a big man and doesn’t go down easy. He fights for yards and can be used all over the field.

Furthermore, he has nice crisp routes and has the ability pull away from defenders.

Even when his QB makes bad throws, there’s a good chance Harry will reel it in. He bails his QB out time and time again. Although he’s not blazing fast, he is quite fast. Hence, why he has been returning punts for the Sun Devils through his career too. He does have lateral agility and will likely put up some surprising combine numbers in my opinion.

The closest comparable I can think of is AJ Green. An incredibly versatile weapon and go-to receiver for an offense after a few years of lacking those types of WRs in drafts. Arguably, Michael Thomas was the last. I expect him to be selected in the first round of the NFL draft. Even if he lands on a questionable offense such as the Bills, or has a Derrius Guice type fall in the draft, I still expect him to be my 1.01. Talent prevails!