With Noah Fant showing great flashes as a rookie and the Denver Broncos offense seemly on the rise @andy_buckler breaks down why he believes Fant is the top TE buy of the 2020 offseason. 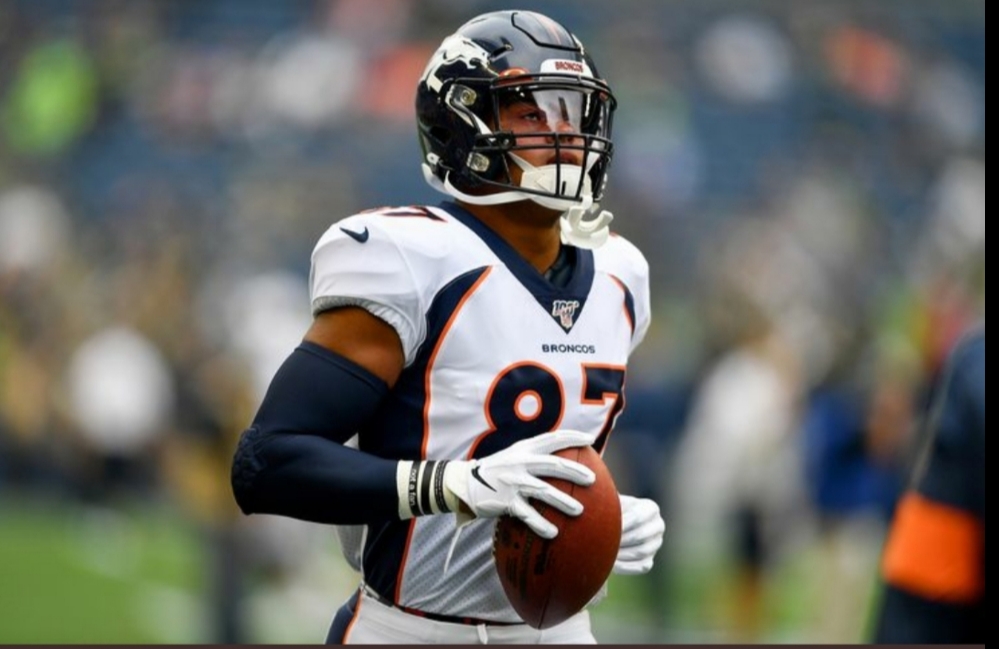 Dynasty owners are always looking for that next superstar at the tight end position, searching for someone who can be the next Kittle or Kelce a true stalwart at the position. With the current tight end landscape, that’s not an easy thing to find, but Broncos tight end Noah Fant looks like he can be just the guy dynasty owners desperately need.

Noah Fant wrapped up his rookie campaign with 40 receptions for 562 yards and 3 touchdowns. Those are very impressive numbers for a rookie tight end. We know that rookie TEs tend to struggle in their first season in the NFL. He was just the 12th rookie TE since 2000 to surpass 500 receiving yards. Fant flashed his athleticism big time in 2019 and looked to have the makeup of a future top 5 dynasty tight end. Now let’s get into why I believe he should be the top TE buy of the 2020 offseason.

The Bright Future of the Broncos offense

It looks like the Denver Broncos found their quarterback of the future in Drew Lock. Lock looked great in his five starts going 4-1. He really started to click with Fant, and they looked to have great chemistry over the last five games of the season. Lock didn’t make his first NFL start until week 13, and I expect them to build even more chemistry in the offseason now that both players have a year under their belts. The Broncos also have a legitimate young no.1 WR in their offense in Courtland Sutton, which will only help open things up for Fant. Along with newly acquired Melvin Gordon in the backfield, this offense is set up quite nicely for the future.

Another reason to love the outlook of Fant is because of the hiring of Pat Shurmur as the new OC. Shurmur has already expressed excitement about how he is going to use Fant. The veteran offensive coordinator has a great overall track record with tight ends dating back to 2000, helping Chad Lewis and Kyle Rudolph to pro bowl seasons. Shurmur has said that he views Fant as a similar player to Evan Engram. Engram was a fantasy force with Shurmur when he was healthy. Shurmur used Engram all over the field, and I expect similar usage for Fant. That should mean more run in the slot for Fant, which is great for his fantasy outlook. Like Engram, Fant is a nightmare cover for opposing defenses due to his speed and quickness. He would be a mismatch in the slot, and his fantasy upside would rise dramatically.

Fant was selected with the 20th pick of the 2019 NFL draft. He played his college ball at The University of Iowa. During his time at Iowa, he shared the field with another first-round tight end in T.J Hockenson. Despite having to share the field with another elite tight end, Fant still had great production. Over his final two seasons at Iowa, he posted 69 receptions for 1,013 yards and 18 Touchdowns. Noah did all that while sharing the field with Hockenson, who was drafted 8th overall in the 2019 NFL Draft. That led to the Broncos investing a premium pick in him, leading me to believe that they are committed to him as their tight end of the future. Elway using that kind of capital on him shows that he considers Fant can be a focal point of the offense for years to come. Fant is an athletic beast with insane measurables. He tested off the charts at the combine. His excellent mix of size and speed makes him one of the premier athletes at the position in the NFL.

With the future looking very bright in Denver and Fant being in the center of it all now is the time to buy him before it’s too late. This offseason will likely be the cheapest he will cost in a trade before his value skyrockets. By this time next year, we’ll be looking at Fant as one of the true elite options at the tight end position in dynasty. At just 22 years old, he can be a potential building block on your roster for years to come!