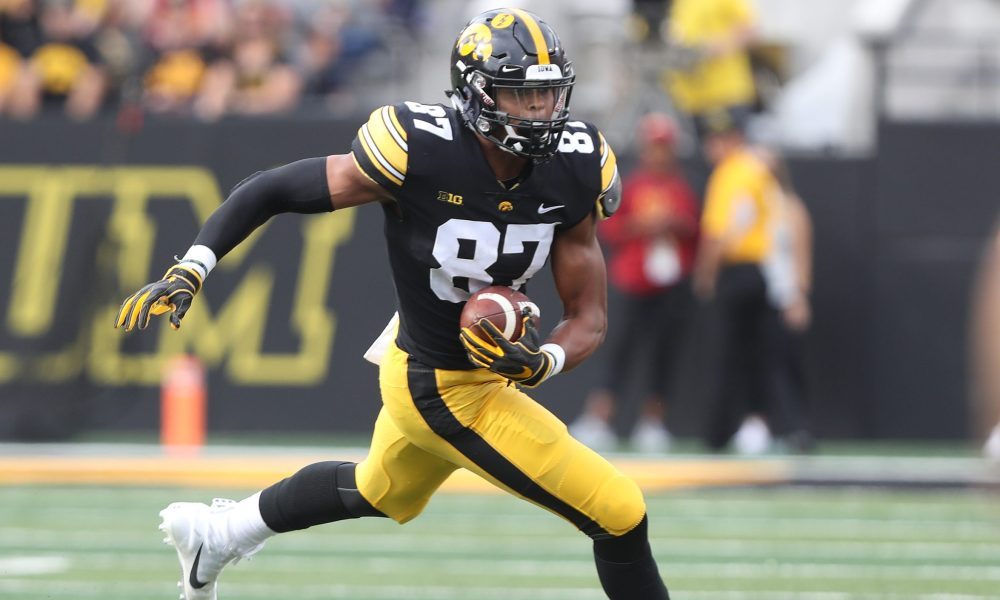 Over the past decade, the University of Iowa has had an embarrassment of riches at the TE position. The situation was magnified over the past two seasons. Many in the NFL and dynasty communities have fallen in love with the 2018 Mackey Award winner T.J. Hockenson. It is undeniable that Hockenson is a great NFL prospect. However, lurking on his very same team is a player I believe possesses even more fantasy potential in the form of First Team All-Big 10 TE Noah Fant. Let us take a deeper look at this dynamic weapon and what he will bring to the table at the next level.

The first thing the casual fan will notice about Noah Fant is his overall build and stature. Fant is literally built like a Greek God standing at an imposing 6’4” 249 lbs. Fant certainly strikes the pose of a traditional move TE in the NFL. Coming out of Nebraska high school football Noah chose to emulate the route of prior top TE prospects and attend the University of Iowa. Fant spent three relatively productive seasons at Iowa City before deciding to forgo his senior year and enter the draft early. After receiving an invite to the 2019 NFL combine in Indianapolis the young Noah Fant proceeded to blow the athletic testing portion out of the water. You can see from his numbers below that he graded as an elite 90th percentile or better in a number of different categories confirming the athleticism we all saw on film.

It seems fair to say that Noah Fant and T.J. Hockenson effectively capped each other’s production during their time together. Had either player been at a school where they were the sole receiving TE in the building their numbers would doubtless be much higher overall. Even with the smaller numbers, each player managed to be recognized by the nation. You can see from his statistics below just how explosive Noah was, playing a huge role in games with his TD and big-play potential.

One area where critics have dinged Fant is his blocking. It is true that T.J. Hockenson is a better overall blocker. However, Fant is far from inept in this department in his own right. One of the certainties in college football is that Kirk Ferentz turns out complete TEs. Each and every TE to come out of Iowa from Tony Moeaki and George Kittle to Hockenson and Fant can all hold their own in every area of the game. This is highly important for young TEs. The quicker they become an asset in the blocking game instead of liability the quicker they can get on the field. The cut up from the Iowa vs. Penn State game below highlights Fant’s versatility from his inline and split routes to his blocking on the line as well as downfield.

Noah Fant is quite simply the most dangerous receiving threat at his position in this month’s NFL draft. He has elite measurements from his explosion and speed to his soft hands and his capable blocking. He is able to sink his hips and run a myriad of different routes from all across the formation. There are undoubtedly areas where he can improve his game but his likely 1st round draft status will assure that his next team will devote the proper time and opportunity to assuring his success in the NFL. The majority of analysts have planted their flag in the T.J. Hockenson camp, I, however, am going a different route and stating my belief that Noah Fant is the top dynasty TE in this month’s draft. He is the superior athlete who offers a higher upside for fantasy points. You can see from his junior highlight film below why he was named First Team All-Big 10 over his former teammate.

Noah Fant will in all likelihood be a 1st round pick in the upcoming NFL draft. As I said before I rank him as my number one rookie TE. I see him as a cross between Jordan Reed and Evan Engram. At the next level, this dynamic athlete will finally be able to show what he is capable of when given a larger workload. Recent reports have him going as high as number 8 overall to the Detroit Lions. Despite his immense potential, some in the dynasty community do not value Noah Fant at a 1st round level. With the scarcity of dynamic players at the TE position, this explosive rookie offers huge upside and consideration at the back half of your upcoming 1st round and higher in TE premium leagues.

The Mattison Express: Meet the Conductor
Down and Dynasty: Top Tight Ends and Their Ideal Landing Spots