OBJ injured: What should we expect in Cleveland now?

@JoeWarrenFF investigates what our expectations should be regarding the Cleveland Browns wide receivers. Who is next up, and who could benefit the most? 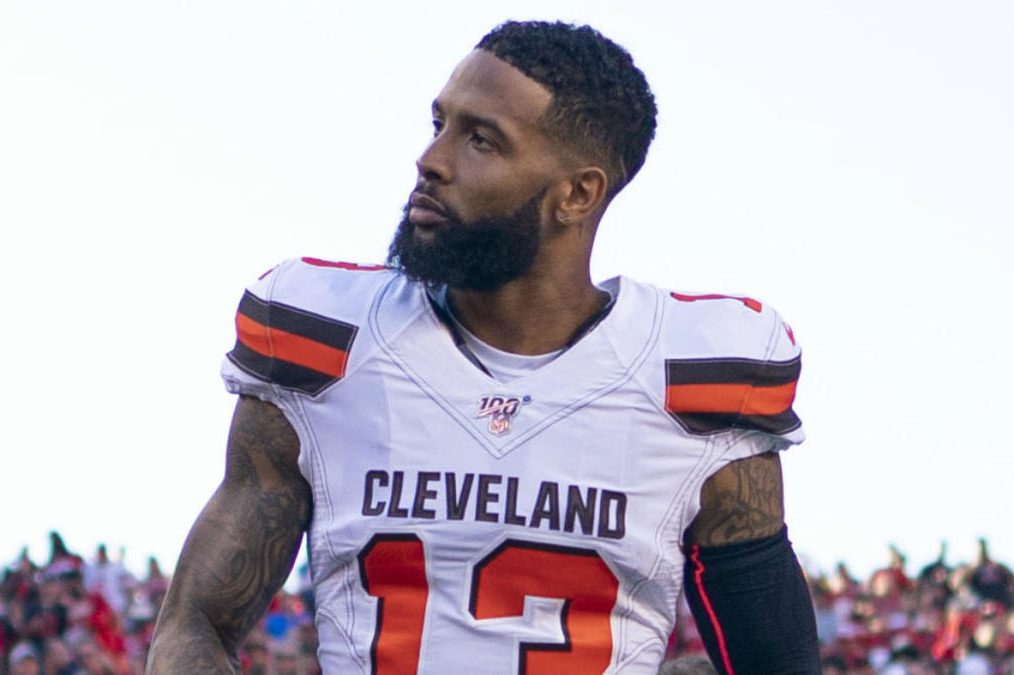 Unless you have been living under a rock over the past few days, you will have seen star wide receiver Odell Beckham Jr now out for the season with a torn ACL. This is not a first for OBJ, as he has now only completed two out of seven full seasons in the NFL.

With an average draft position of 29 and the 10th wide receiver off the board, many fantasy owners may be scratching their heads, wondering what to do now. Especially if, like many others, you invested that ever so valuable 3rd round pick on Odell and expected a great bounce-back season. (A season we have not actually seen since 2016, but that is a conversation for another day).

With an average draft position of 29 and the 10th wide receiver off the board, many fantasy owners may be scratching their heads, wondering what to do now. Especially if, like many others, you invested that ever so valuable 3rd round pick on Odell and expected a great bounce-back season. (A season we have not actually seen since 2016, but that is a conversation for another day).

Hopefully, with this article, I will have given you a clearer understanding of who may be a beneficiary of OBJ’s absence and has his previous absences had a notable effect on team fantasy production.

Let us look at the 2020 season. The season so far has been injury-riddled. From Von Miller to Christian Mccaffrey, Odell Beckham Jr is next on a long list of star players set to miss a big chunk of this year’s season.

But OBJ fantasy owners aside, someone must benefit from the spell on the sidelines. Look at Carolina, for example. Like many other CMC drafters, I thought my season was over when the CMC injury news broke. However, I managed to pick up Mike Davis on waivers for relatively cheap. And he has put up RB1 numbers 60% of the time, including a week 5 overall RB1 performance.

We will delve into Cleveland’s waiver wire options shortly. But let’s just say your season may not be lost just yet.

OBJ had not topped 100 receiving yards in 2020. In fact, he has not eclipsed the landmark since Week 6 of 2019, where he totaled 101 receiving yards. This year Odell has a season-high of five receptions and 81 yards. It is not like he has not been targeted, seeing 10 in Week 1. However, he currently ranks 48th in receiver rankings for receptions on the season. (Travis Fulgham and Greg Ward have more, which really distracts from my Eagles wide receiver article).

Was the issue of chemistry between OBJ and Baker Mayfield the problem? Maybe. Jarvis Landry has not seemed to have had the same issue, ranking WR12 in 2019 and WR18 in 2018.

The volume is there for wide receivers in Cleveland. Baker Mayfield is throwing the ball on average almost 30 times per game in 2020. However, this is down on his previous two seasons averages. Most likely attributed to a Kevin Stefanski offense. (Which saw Kirk Cousins throw the ball on average 29.6 times in 2019.) (Of which worked well for both Stefon Diggs and Adam Thielen during his time in Minnesota).

The potential lack of passing volume compared to over teams may be slightly concerning. However, it does not distract from the fact there are now seven targets per game up for grabs. Jarvis Landry sees an average of 5.57 targets per game already. Can someone like Rashard Higgins, who saw six targets in Cleveland’s win over Cincinnati, benefit from the vacated looks? I am not expecting someone in Cleveland to put up 2021 premium fantasy draft pick numbers. However, it is possible someone in that room could give your team valuable points for the rest of the season. (This is where I will point out Cleveland play the New York Giants and the New York Jets in the fantasy playoff rounds, which is, as you can imagine, a gold mine for fantasy production).

As discussed previously, Baker Mayfield is throwing the ball almost 30 times per game. But where are those targets distributed? Does he favor targeting his tight ends, or does he love to dump the ball off to the pass-catching running back for easy completions to bulk up the stat sheet? Let’s see.

If we compare the statistics above to those of the 2019 Minnesota Vikings offense (under Browns head coach Kevin Stefanski), we see similar numbers. Over the season, there was a 47.28% target share for wide receivers, and their top receiver saw 44.49% of those targets. Without OBJ, Jarvis Landry is the undisputed number 1 receiver in Cleveland. Landry is already seeing a 37.5% share of wide receiver targets, which is only 3.84% less than OBJ was seeing. For the season, Landry ranks as the wide receiver 40, which means the expectation should not be a set and forget starter. Instead, however, more of a matchup dependent, high upside receiver option for whoever replaces OBJ in Cleveland.

Who benefits the most?

For me, there are three main beneficiaries, and they all play different positions. I will list them off then explain my reasoning for that after.

Firstly, I believe Kareem Hunt benefits big time from an OBJ absence. Without an alpha receiver on Cleveland’s perimeter, Baker may find himself in more situations where he needs to dump the ball off to the running back to gain an easy five yards. However productive some of the depth receivers can be, they are not going to be relied upon as heavily as one of the top running backs in the NFL with exceptional hands (career-high 53 receptions in a season).

It is a different offense for sure, but in 2018 when OBJ missed the last four games of the season, Saquon Barkley saw an uptick in passing-game usage. Between Week 10 and Week 13 (the 4 games before OBJ’s absence), Saquon averaged five targets and four receptions. In the four games where OBJ did not play, his targets increased to 7.5 per game and 4.25 receptions.

Hunt currently averages 3.14 targets and 2.28 receptions per game, which we can easily expect to increase. He is the RB6 in PPR formats, and even with a Nick Chubb return imminent, Kareem Hunt should continue to provide valuable fantasy performances.

Next up is Austin Hooper. Although currently injured, Hooper was putting up respectable numbers in 2020. After a slow start to the season, before his injury, Hooper had five receptions in three straight games and double-digit fantasy production in each of those.

For similar reasons to those above, without an alpha receiver on the outside, I see an uptick in targets to a reliable weapon over the middle. With Jarvis Landry needed to operate on the perimeter more, this should, in theory, open up the middle of the field to an expectant Austin Hooper.

The tight end from Atlanta has not produced as many would have hoped for after Cleveland signed him to a 4 year $42 million contract. However, this could be the opportunity needed for him to redeem himself.

Like before, let’s look at Evan Engram’s production when Odell Beckham Jr missed the last four games of the 2018 season. Although Engram himself missed a large portion of that season, four of his five best games came in the last four when OBJ was absent.

To be honest, I personally think David Njoku is a better tight end than Austin Hooper and could quite feasibly outperform him. I would happily trade for both and bank on the upside. If either of them can put up Engram 2018 without OBJ performances, then you have a sure-fire TE1 on your hands.

Finally, and probably the most obvious is Rashard Higgins. The 5th year receiver out of Colorado State already sees 11.05% of wide receiver targets, including three games where he did not play.

Higgins is coming off a six target, six reception, 110-yard game. If that is a sign of what is to come, then sign me up. In one game, Higgins has done what OBJ has not done since Week 6 of 2019 (go over 100 yards receiving). He played in 85% of offensive snaps and is now the clear WR2 in Cleveland. The previous WR2 (Jarvis Landry, now the WR1) put up numerous respective performances.

Cleveland has only had two WR2 or better performances so far in 2020 (both being OBJ), so try and temper your expectations. However, twice they have had a WR come in at WR25 for the week, and if you can get that performance out of a reasonably cheap waiver wire addition, then you are in for a good season.

Someone must take OBJ’s seven targets a game, and the clear and obvious beneficiary is Rashard Higgins. He will not take over the fantasy world, but he could give you numerous valuable weeks, so he is worth an easy 15-20% of your FAAB budget.

To conclude, OBJ will be missed. He may not be the dynamic playmaking target hog Cleveland fans had hoped for when the trade was announced two years ago. However, he has been valuable for the Browns franchise and will have big shoes to fill.

Whether that be Hunt, Njoku, Hooper of Higgins, numerous people will see their value increase in the coming weeks. We could even see rookies like Harrison Bryant or Donovan Peoples-Jones step up and cement their starting line-up roles.

One thing is for sure though, do not sell OBJ off cheap. $12.97 million of his $15.75 million contract becomes guaranteed for 2021 after his most recent injury. This means whoever this injury benefits in 2020 may not benefit in 2021. Beckham Jr will be back next year, so do not trade him away for pennies on the dollar.

And as always, if you have any fantasy football-related questions please feel free to contact me on Twitter @JoeWarrenFF, and please do give me a follow.