Odell Beckham JR: is OBJ a value in Dynasty?

Odell Beckham JR. hasn’t met expectations since being traded to the Browns but can he turn it around? @Andy_buckler takes a look at OBJ’s dynasty outlook! 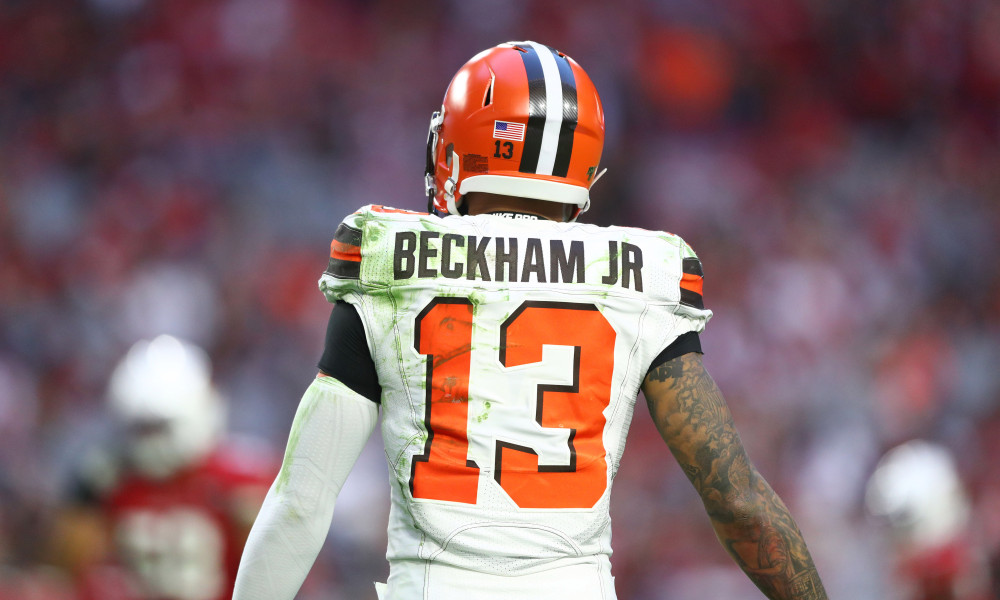 Odell Beckham Jr started his NFL career on a Hall of Fame trajectory during his first three seasons, but he hasn’t been able to find that same success since. Now, entering his age 29 season, coming off of a major knee injury, what should you expect from Odell going forward in dynasty leagues? Well, let’s dive in!

Since joining the Browns

Odell was traded from the New York Giants to the Cleveland Browns in 2019. This was one of the biggest trades in NFL history at the time. OBJ was considered the best WR in the NFL. Getting paired with Baker Mayfield was supposed to be a match made in Heaven for fantasy football.

Things have not gone as planned up to this point for the Browns and Beckham. In Odell’s first season with Cleveland, he caught 74 passes for 1,035 yards and four Touchdowns. That was good for WR25 in full PPR in 2019, the worst finish of his career outside of 2017 when he played just four games. In 2020, he would post a line of 23 receptions for 319 yards and 3 Touchdowns in seven games before tearing his ACL. It was trending towards yet another mediocre season for Odell’s standards.

The offense just seemed to click better without Odell on the field. I believe the Cleveland Browns are a better team with Odell Beckham Jr healthy. It’s crazy to think that would be a real debate after the stellar start to his career, but things change quickly in the NFL!

Can OBJ bounce back?

The Cleveland Browns have expressed their desire to keep Odell going into 2021. He’s under contract with the team until 2023. So, as of now, we should project him staying with Cleveland.

Assuming he’s in Cleveland, I think his upside with Mayfield in a run-heavy offense is capped. Though I still believe in his talent, I don’t think he’ll be able to get back to where he was with the Giants. That doesn’t mean he can’t still be a productive wide receiver for your dynasty team.

He may not be a WR1 for fantasy but a couple more years of high-end WR2 play is well in the realm of possibilities. Even in his down season with the Browns, he still put up a 1,000-yard season. I think his 2019 season is his floor going forward. That’s still a very valuable fantasy player.

Odell Beckham was the number one player in all of dynasty fantasy football just a few years ago. Now, he has an ADP of WR39 in dynasty startups. That’s WR4 price for one of the most talented WRs we’ve ever seen on a football field. He has disappointed fantasy managers for the past three seasons, but at WR39 price, I’m willing to take that risk.

Odell will be entering his age 29 season coming off a torn ACL which are both causes for concern. The risk, however, is baked into his price. When acquiring Odell, you have to go in knowing that he is unlikely to return to his top-5 form that we saw in New York.

When trying to execute a trade for Odell, I’d look to offer an early 2nd round rookie pick. In dynasty startups, he’s being valued as the WR39, which is right around where rookie picks in the 2.03-2.06 range end up going in the draft.

I’d much rather take the chance on Beckham Jr than the rookie 2nd rounder. He still has solid upside, just maybe not what it once was. At the very least, I envision OBJ being a WR2 for the next few years on your dynasty roster. His value is at an all-time low and acquiring him at his current price is a great dynasty move.

If you roster Odell and are looking to sell, I’d push for a late-first round rookie pick in return. If you can’t find a buyer at that price, I think holding onto him into the 2021 season is the best play.

Finding value in dynasty is the key to winning championships. Odell Beckham Jr. Is currently one of the best values to be had in dynasty leagues. Adding an elite talent to your roster for a second-round rookie pick is a great move to push your squad to the top. I believe OBJ can return high-end WR2 value to your team for the next 2-3 seasons.

Taking shots on players like Odell after many have given up on them is what can separate you from the rest of the league. OBJ is still one of the best talents at the wide receiver position in the NFL. At his current price, he holds very little risk to acquire.