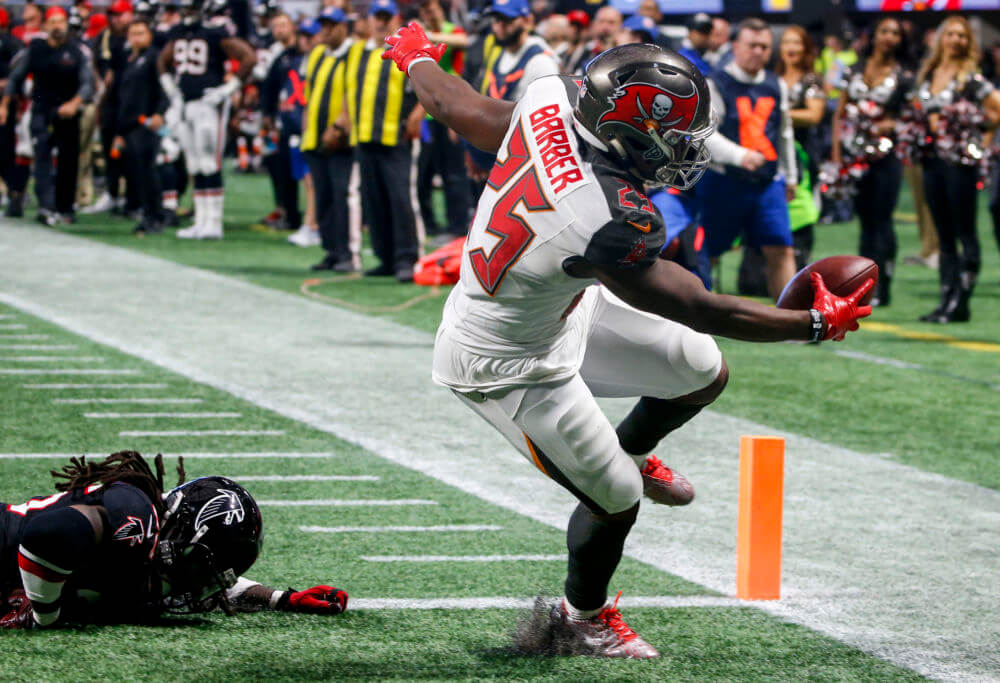 Peyton Barber is one of those guys that lots of people had on the end of their roster without much hope for any production. You may have just given up and dropped him….Then of course he has a breakout game in week 13.

Perhaps most famously remembered for entering the NFL draft after only 2 years at Auburn (1 of which as a starter), Barber suddenly has a bit of value and could be penciled into lineups down the stretch of playoffs and beyond. Barber left Auburn a year or two early, due to financial issues with his family. If he remained as the starter for a couple of years at Auburn, he may have been drafted, rather than a UDFA. His stats from his short college tenure can be seen below:

As far as sophomores go, he was pretty impressive in 2015. Over 1,000 yards rushing with 100 yards receiving, and 13 TDs. A positive note from his early entry to the draft is that he’s still quite young. He turned 23 less than 6 months ago so has time on his side.

It was notable that Peyton had a feature back role in week 13 despite Jacquizz Rodgers and Charles Sims being healthy. The Bucs’ backfield has been extremely poor this season and that could play in Barber’s favor. Sims is a free agent at the end of the season and considering how poor Doug Martin has been, there’s no guarantee they keep him around. If Barber can keep playing well down the stretch, he may have the first crack at the job in 2018.

No-one had pegged Barber to be a starter entering the league. The 5’11’, 228 pound RB had solid size and some good skills, but perhaps lacked explosiveness and decisiveness. NFL.com’s Lance Zierlein had this to say about Barber, “Good thickness through his lower body with an ability to drop his pads and hit it downhill when he’s near the end zone. Has vision to recognize running crease development. Can weave from cut-to-cut on second level. Flashes good lateral agility to jump¬-cut his way into better running lanes when interior traffic is a problem. Intelligent with ability to learn NFL playbook quickly. Makes sound decisions in blitz pick¬ups. Needs technique work, but has capability to handle himself in pass protection.”

Perhaps his lack of “wow” made teams hesitant and type-casted him into a role as a change of pace or receiving back. However, patience and vision is becoming more important in the NFL instead of explosion. Similar to LeVeon Bell, Barber ran a 4.6 40-yard dash but seems to always find the right hole.

By no means do I think Peyton Barber is the next LeVeon Bell, but maybe his football smarts combined with extra years to learn his team’s playbook may have given Barber an unforeseen advantage. With Barber looking better than any Bucs’ RB has all season, there’s no reason for them to stop giving him snaps. If you’re in a league where he was dropped in the last year or so, it can’t hurt to pick him up!