Chris Herndon is coming off of a lost season in 2019 but he’s healthy and ready to put up big numbers in 2020. Herndon is a post-hype with massive upside in the Jets passing game. 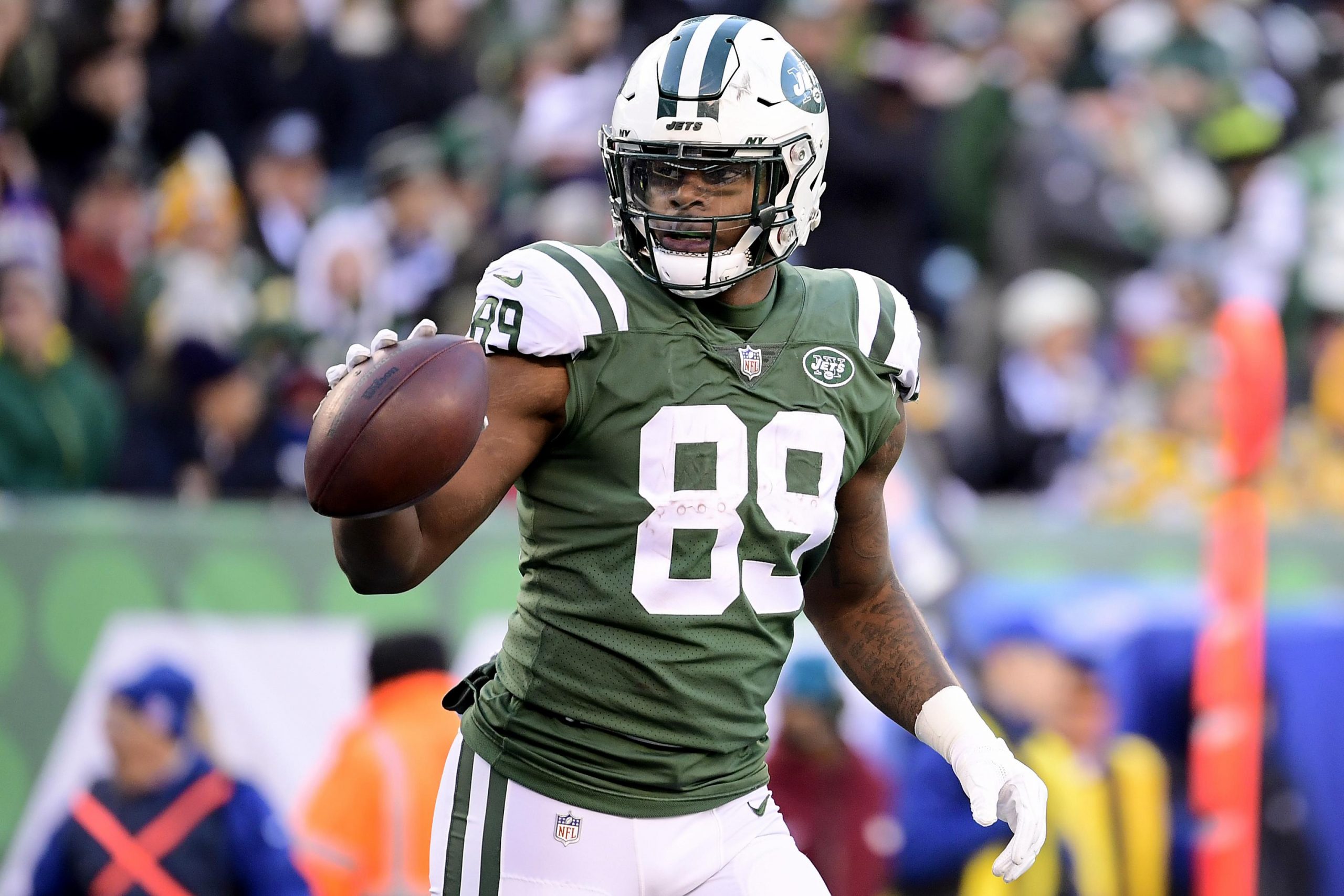 Chris Herndon had a ton of hype going into 2019, but things didn’t go as planned for his dynasty managers. He started the season suspended then battled an injury that kept him out all but one game. Although he disappointed many with a lost season in 2019, he’s primed for a bounce-back in 2020.

The hype has been picking up at Jets camp about third-year TE Chris Herndon. It’s time to buy in and acquire Herndon in dynasty leagues. He’s just 24 with massive upside in the Jets offense.  As a rookie, he showed great chemistry with Sam Darnold posting 39 catches for 502 yards and 4 TDs. Going over 500 receiving yards is very rare for a rookie TE. The Jets receiving corps is atrocious and has only been getting worse due to Denzel Mims and Breshad Perriman getting injured during camp. Herndon has shot to be a huge contributor to the young QB.

The Jets have 183 vacated targets with nobody to throw the ball to outside of Jamison Crowder. Chris Herndon is set up to have a huge role early on in the passing game. He’s been getting raving reviews early on in camp and seems to be picking up right where he left off in his rookie season. Beat reporters say that the 3rd year TE has been Darnold’s favorite target so far, especially in the red zone. This is what dynasty managers of Herndon should love to hear. Darnold showed great chemistry with Herndon as a rookie. They should only build on that going into 2020.

Just to give some insight into how good Herndon really was as a rookie, here’s a pretty crazy stat: since 2014, only three TEs have reached 500 yards receiving and averaged 7.0+ PPR points/game those three TEs were George Kittle, Evan Engram and the man himself Chris Herndon. Herndon has been a forgotten man in dynasty leagues, and now is the time to acquire him.

When looking for a breakout TE, the main thing you should be looking for is top 5 upside, and Chris Herndon has that. As we know, the TE position is a weak one in fantasy. We want the guy that can be a true difference-maker in our lineups. It doesn’t take much to finish around 7-12 in the current TE landscape, so if you’re taking a shot, you want a guy that can produce huge numbers and be an elite option. Chris Herndon checks all of those boxes. He’s currently an afterthought in dynasty at his TE20 ADP. He’s a smash buy.

Not many NFL TEs have the opportunity to end up as the number 1 option in a passing attack, Herndon can very well end up being the number 1 target in the Jets offense. That opportunity alone is worth the price of admission. At the very least, Herndon opens the season as the number 2 target behind Jamison Crowder, who is primarily a slot receiver. To put Herndon’s situation in perspective, let’s think about Darren Waller last season. Waller finished as TE3 on a Raiders team that had no other weapons on the outside. They had no choice but to feed waller targets. I envision the same for the Jets and Chris Herndon. At an ADP of TE20, the Miami product has legitimate 100+ target upside! Going as a TE2 in startups, Herndon possesses way too much upside to pass up on.

If you enjoyed this article give me a follow on Twitter @andy_buckler if you want to talk some dynasty fantasy football! Don’t forget to join the #NerdHerd to get access to our dynasty rankings as well an extra weekly episode of the Dynasty Nerds podcast!

Who will be the WR3 for the Chargers?
Volume WRs: WOPR Compared to Rankings