It’s finally draft season, and your @DynastyNerds team is here to help! We recently shared the first round of our SuperFlex mock draft. In this article, we bring to you the second round! 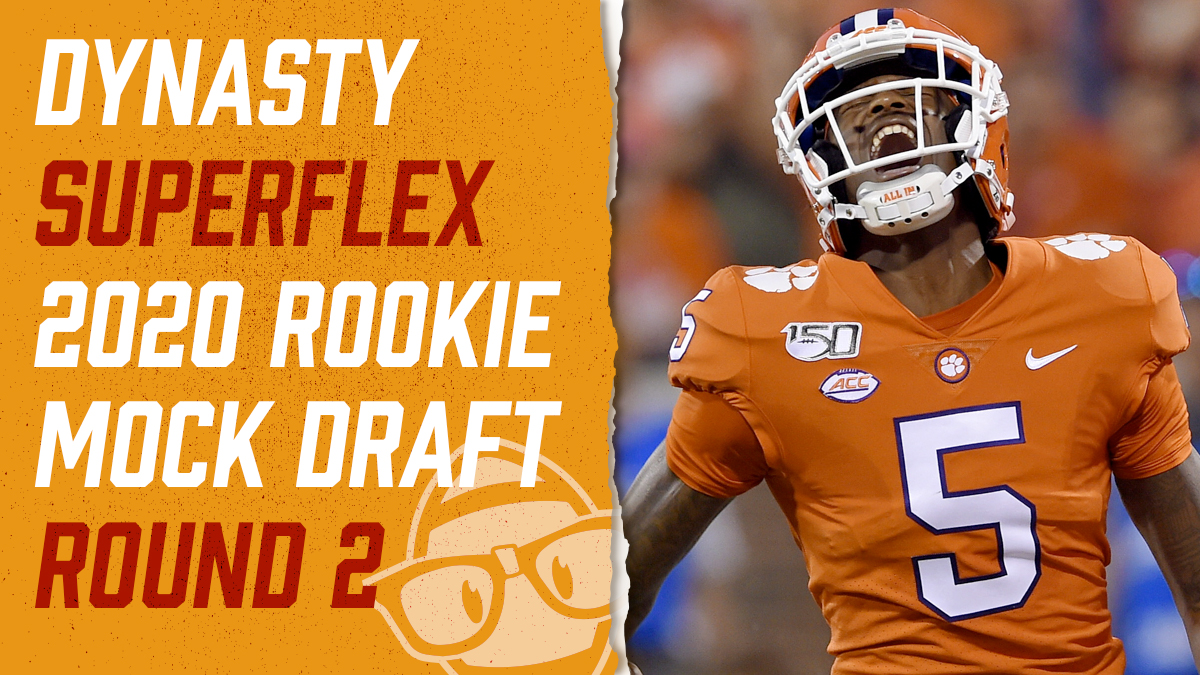 What if we told you that the projected lead receiver for the New York Jets and Las Vegas Raiders could slip into the 2nd round of your SuperFlex rookie drafts? Considering the talent and equity spent on the WR and RB positions in the 2020 NFL draft, this rookie class has the potential to be one of the deepest in recent fantasy history.

Considering this information, it is evident that you will find plenty of value in the middle of your dynasty rookie drafts! Now, let’s dive into the second round of our SuperFlex mock draft. And in case you missed it, make sure to check out the first round as well. Enjoy!

I thought about reaching for a RB with this pick, but decided to go the safe route. Henry Ruggs III is a dynamic talent that was drafted 12th overall by the Las Vegas Raiders. He was the first WR taken off the board, which likely means the Raiders will manufacture touches to get him involved early and often. And to be able to draft Ruggs in the early second round proves just how deep and value-filled your rookie drafts will be!

Denzel Mims is a threat at all levels of the field. He has the best body control out of all the wide receivers in this class. In addition, I believe he landed in the perfect spot with the New York Jets, who lost Robby Anderson in free agency. Going into the draft they were in need of a true number one receiver, and Mims can absolutely fill that role. He is going to catch at least six touchdowns next year.

I love Denzel Mims. Thank you for allowing me to steal him in the second round!

With the 33rd pick in the draft, the Cincinnati Bengals drafted Tee Higgins to pair with Joe Burrow for the next four years. AJ Green is currently on the franchise tag, and his future with the Bengals is uncertain. In addition, Higgins is much more talented than their current WR2 in Tyler Boyd. With a path to clear opportunity, Joe Burrow and Tee Higgins will be a valuable pairing for years to come!

I was debating between several running backs with this pick. I decided to go with Ke’Shawn Vaughn, who is now the favorite to lead the Tampa Bay Buccaneers backfield. He will be competing with Ronald Jones, who was drafted by the Bucs in 2018. With only two years left on Jones’ contract and minimal dead cap in 2021, Vaughn could easily take over this backfield and become the full-time starter as soon as this year. I expect a decent workload in his rookie season, making him a valuable asset for all fantasy owners.

This pick was a tight one between Bryan Edwards and Michael Pittman Jr. Ultimately, I chose Edwards because I see him as the future WR1 for the Raiders. He may not assume that role immediately; however, out of all the WRs on the Raiders roster, he fits the mold of a prototypical WR1 the most. He has the size to win contested catches, and the speed and quickness to win deep. If he can fine-tune his route running and reduce his drops, he can be a consistent 1,000-yard receiver for years to come.

I would’ve taken Michael Pittman Jr here if I would’ve not been so quick to grab an RB. Either way, I’m still happy with this selection. I’m not as worried about Devin Singletary as many others are. Zack Moss is a bigger version of Singletary, and was very productive for Utah, leaving as their all-time leading rusher. You won’t find a runner who did much better averaging 4.5 yards after contact and forcing 89 missed tackles. Moss is also efficient in the passing game catching 86% of his targets.

Remember in 2018 when Mike Williams finished as a WR2 with 10 TD catches? That was with Philip Rivers at the helm, albeit a slightly younger Rivers. Going into 2020, Rivers has one of the best OLs in the league. Pittman Jr. can have the same kind of output with Rivers as Mike Williams had when he was with the Chargers.

He is a big target who has the physical traits and production of true X-receiver. Also, he is not afraid to go up and attack the ball in the air. T.Y. Hilton is aging and has not been healthy the last few seasons, which means the WR1 role could be up for grabs as early as this year. With Pittman in prime position to become the leading receiver, he should provide fantasy owners with both a high floor and a high ceiling.

Brandon Aiyuk’s tape speaks for itself. He is an explosive athlete and a “yards after the catch” machine. According to PFF, he led this draft class in YAC per reception averaging 9.9 throughout his college career. The only concern I had going into the draft was whether a team would invest a high draft pick in Aiyuk. When the San Francisco 49ers moved up to select him, those doubts disappeared. And when Kyle Shanahan selects a receiver in the first round, it is hard not to pick him this late in a rookie draft. Other considerations for me were Jordan Love and Antonio Gibson.

After Aiyuk went off the board, there was a drop-off in skill position players, so I went with Jordan Love. Love has all the tools to succeed at the next level; however, he struggled with his decision making in college. Sitting behind Rodgers will help him develop that skillset. Having the option to acquire a quarterback with this amount of potential late in SuperFlex drafts is a steal. Sure, you will have to stash him on your bench, but it will be worth the wait.

You don’t have to take DeeJay Dallas here. In most leagues, he is coming off of the board in the 3rd round. That being said, I would be willing to go this high to take my draft crush. He has a real opening for early playing time with Penny’s injury, and we know that Pete Carroll is not afraid to use the best player regardless of draft capital. He has a crazy high ceiling, and could realistically win this job at some point this year.

With the 43rd pick in the draft, the Chicago Bears surprised everyone when they took Cole Kmet – Tight End from Notre Dame. He joins a slightly crowded TE room with Jimmy Graham, Demetrius Harris, and Adam Shaheen. However, Graham’s contract is not guaranteed beyond the 2020 season, so he is likely only a stop-gap option. That should give Kmet a year to develop, and then assume the starting role in Matt Nagy’s offense. At this point in the second round, I am happy to get the best TE in the draft with a solid landing spot.

With this pick, I went with a player that presents a high ceiling, but also a very low floor. Shenault Jr. struggled with a few injuries in college; however, when healthy, he flashed the skill and athleticism that made him a threat to score from anywhere on the field. Shenault is as versatile as they come. In his sophomore season, he recorded 86 receptions for 1,011 yards and 6 receiving TDs. And to top it off, he added 115 rushing yards and 5 rushing TDs.

It is important to note that Shenault will likely still play behind D.J. Chark. Also, Shenault’s fantasy production will only go as far as Gardner Minshew takes the offense. If Minshew can take the next step in his sophomore season, there should be plenty of opportunities for Shenault to be fantasy relevant.

Are you a #NerdHerd member? For $2.99 per month, you get access to the buy/sell tool, exclusive podcasts, the Dynasty Prospect Film Room, rankings, and more to come.