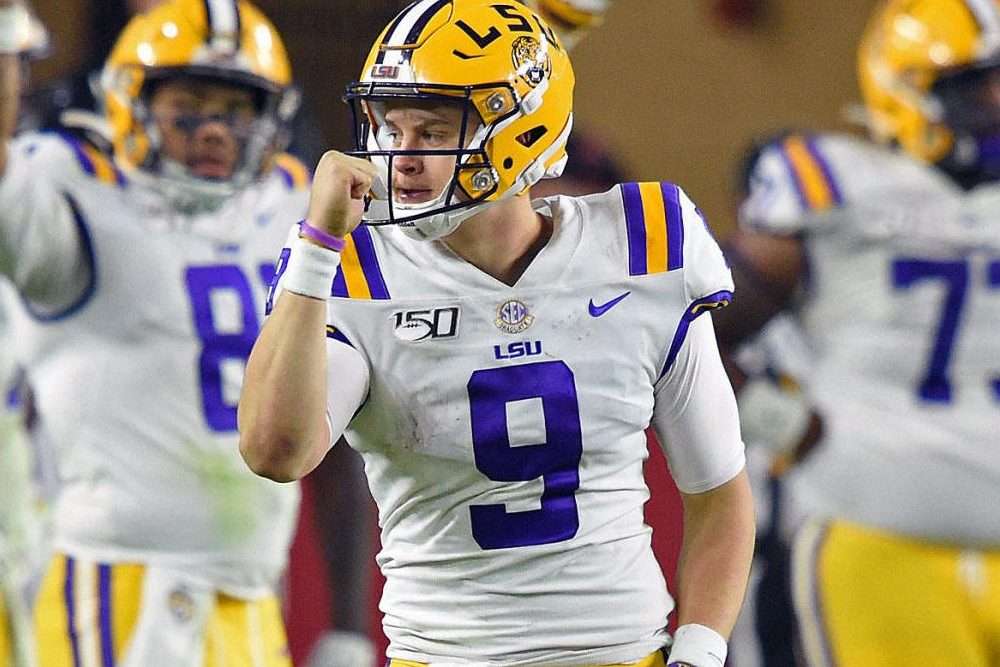 For all those Superflex fans out there, you’re sure to have your eyes peeled on those 1st round QB selections when the draft comes around. We’re beginning to have an accurate picture of how the draft order will shape up, as well as which teams will be in need of QB help next season.

As such, I wanted to take an early stab at predicting where those QBs will land and in which order. Here we go……

With the injury to Tua and Burrow’s incredible season, I suspect the number 1 overall pick in the draft will be Joe Burrow. Burrow will arrive back in Ohio where he grew up and immediately seize the starting job. Andy Dalton will be out of town via free agency, and Ryan Finley ain’t keeping anyone on the sidelines.

He may be lacking receiving options with AJ Green potentially departing, so Tyler Boyd and John Ross figure to be his main options unless they add via free agency or the draft.

Having said that, the Bengals figure to see an improved O-line in 2020 with key members of the unit recovering from injury. They will need to continue adding pieces around Burrow for him to have fantasy success, but he’ll undoubtedly have a long leash for the next few years.

Despite Tua’s injury, I don’t expect Tua to drop to the end of the 1st round as many are expecting. There’s still every chance that Chase Young is taken ahead of Tua but there’s also a strong possibility that the Dolphins take Tua and sit on him for a year. In the meantime, Rosen or Fitzpatrick could steer the helm for another unsuccessful year to get a high pick in 2021. By the time Tua gets a shot at the QB job, the receiving landscape in for the Dolphins could be drastically different. Devante Parker has arguably been the best receiving option on the team but he’s a free agent after the 2020 season so who knows if they’ll form a connection. I suspect over the next 2 draft classes, they’ll add some receiving talent to support a young QB, so we can only wait and see what that looks like.

Next up would be the Bucs. They’re certainly not investing in Winston after the season that he’s had. Currently possessing a 4-7 record and Winston throwing 20 INTs through 12 weeks, I have no doubts that Tampa will be searching for their QB of the future. This could be one of the best landing spots for a young QB with Evans and Godwin as weapons. Having said that, Tampa currently possesses the 20th ranked Oline when it comes to pass protection. They’ll have to invest in some protection pieces along with Herbert to give him a chance to succeed. With Herbert’s powerful, accurate arm and Evans/Godwin on the outside, he could very well be the most productive rookie QB out of the gates.

The play of Phil Rivers has drastically declined recently, and it looks like the end is nigh. Fromm certainly hasn’t lived up to his lofty expectations at Georgia after a promising freshman season. However, the Georgia system hasn’t put him in a favorable position to put up lofty passing stats. Many scouts seem to believe all the tools are there and I just have this gut feeling that I can see him in the Chargers’ colors. Fromm is lacking in size and arm strength, but he’s an accurate game manager who comes up big in clutch moments. The Chargers have a strong rushing attack and strong receivers in Mike Williams and Keenan Allen. A Rookie signal-caller could certainly land in worse situations. Fromm will hope his intangibles land him a 1st round selection from the Chargers.

Hurts feels like a perfect shoo-in to fill the inevitable departure left by Cam Newton. A mobile QB with impressive arm talent is almost as close as it gets. Hurts has exploded in Lincoln Riley’s offense this year, which has inevitably raised his stock since his demise at Alabama. Many questions will be raised as to whether or not he’s a system QB and whether or not he possesses the traits necessary to be a success in the NFL. Does he struggle to read defenses? Is he accurate enough? Does he have sufficient arm strength? All of these questions will be raised in the pre-draft process; however, I can see Carolina being willing to take the risk. Worst case, they roll with Kyle Allen for a little while longer and stew in mediocrity.

Is it too soon to give up on Trubisky yet? This would be a total 180 at the QB position if the Bears select Eason. He’s not a particularly mobile QB, however, he has extremely impressive arm talent and can make all the throws. His powerful arm can easily stretch defenses and he’s capable of fitting passes into tight areas. He’s a little inexperienced having only played one season at Georgia in 2016, then transferring and playing one season for Washington in 2019. His college career comprised of 28 games started in 4 years. However, it’s hard to argue with what he’s shown on the field this season. This would be a huge upgrade for the Bears passing attack if it did come to fruition. Allen Robinson may finally get some catchable targets….

Darkhorse pick here. The Raiders don’t seem to be too attached to Derek Carr long-term but who knows which QB Gruden likes. He tends to go against the grain with his draft prospects. Anthony Gordon had the tough task of replacing Gardner Minshew at Washington State….and he certainly hasn’t disappointed. He has blown expectations out of the water.

Through 12 games, he has 5,228 passing yards with 45 TDs and 16 INTs and a 72% completion percentage. In comparison, Minshew had 4,779 yards with 38 TDs, 9 INTs, and a 71% completion percentage in his senior season. Prior to his days at Washington State, Gordon won a JUCO national championship with City College of San Francisco. He now finds himself firmly on the radar of NFL scouts as a legitimate prospect. We’ll see who believes in the prospect after an outrageous campaign.