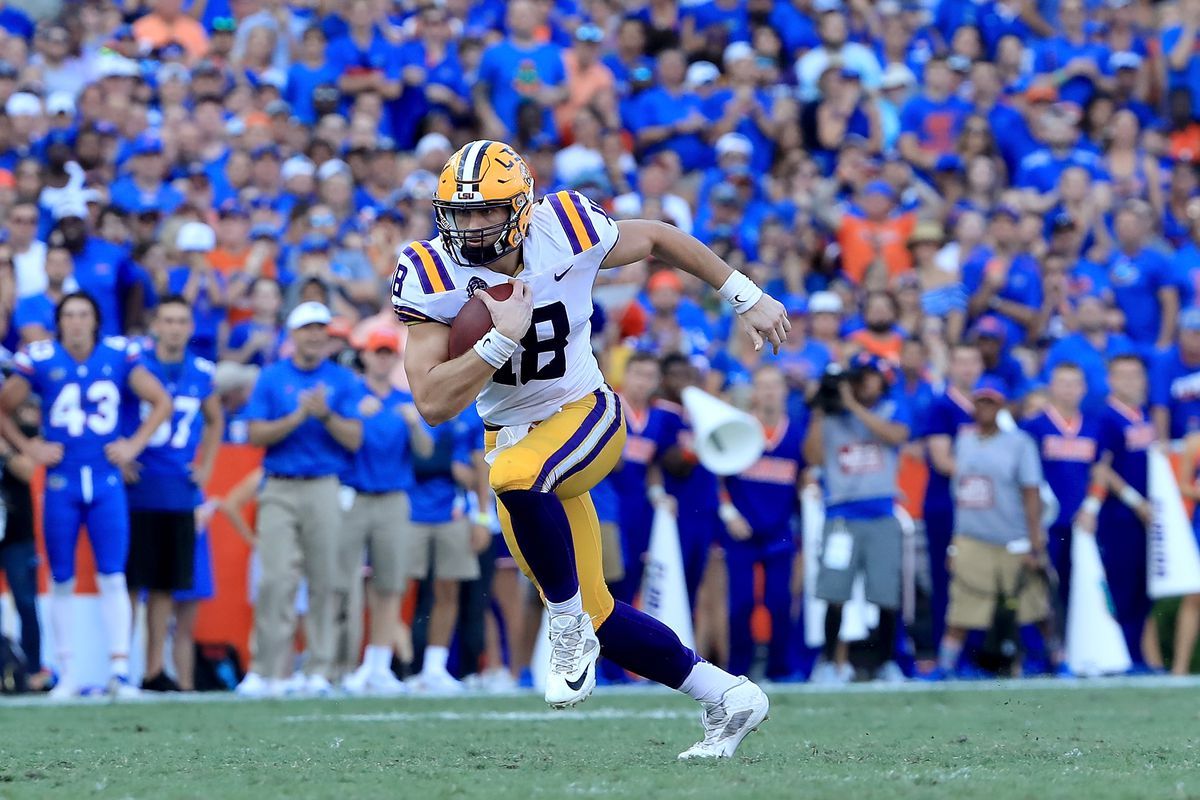 The tight end (TE) prospects in this 2019 draft class are being highly touted and rightfully so. Noah Fant, T.J. Hockenson and Irv Smith Jr. are all receiving early-round attention and should make impacts for whichever NFL team they land on. We even have players like Dawson Knox, Jace Sternberger and Kahale Warring each making their own case to be high day two selections in the coming days. With all the hype surrounding these names, it’s easy to overlook the rarely used big man from the bayou, Foster Moreau, TE LSU.

To put it kindly, LSU’s passing offense was flat out bad in Moreau’s final two seasons for the Tigers. In 2018, they ranked 67th in passing yards per game, and 63rd in total passing yards; out of 130 FBS teams. In 2017, they were even worse; ranking 82nd and 84th in those respective categories. This is important to know in order to provide some context to his lack of production. The fact is most college teams do not utilize the TE position anywhere close to how NFL offenses do. This makes projecting the position after the upper echelon guys even more difficult. So, lets focus on what he did show after the season and what makes him such an interesting prospect.

Noah Fant wasn’t the only TE to put on a show at the combine. Moreau did his best to show that he deserves some hype of his own. His 40-yard dash time of 4.66 seconds, placed him 5th at the position. He tied for 2nd with 22 bench press reps and 3rd with a vertical jump of 36.5”. He wasn’t done; his 121” broad jump was 4th and he finished 1st in the 20-yard shuttle with an impressive 4.11 time. Moreau was a winner in Indianapolis. He has solid size for the position and above average athleticism. Normally the testing measurables confirm what you’ve seen from a player’s film, but in this case because of the offense Moreau played in we rarely saw this type of athlete on film. He did have flashes throughout his career and we’ll take a look below.

The game vs. Rice was Moreau’s best career statistical game as a pass catcher. He finished that game with five receptions for 73 yards and 1 touchdown. He’s a versatile tight end and it showed over the course of his career as he lined up all over the field. LSU lined Moreau up as a traditional in-line TE, in the backfield as a fullback, H-back, split out wide, and in the slot. These weren’t situational occurrences that happened once every blue moon either.  Moreau was positioned all over the field multiple times in each game. Although his production is nothing to get excited about when you watch him there are times when he does a fantastic job of releasing and getting open, the offense just didn’t flow through him; or any receiver for that matter. The positive is, he never let his lack of involvement in the passing game take away from his contributions as a blocker. Moreau has a chance to find himself in a position to play sooner rather than later in two TE sets because of his ability to help in the run game. He is not just a run blocker, he is a prospect can do a little bit of everything.

You can really see the 4.6 speed he has on the play above. Despite being wide open, the defensive back looked like he was going to close in on him right around the 20-yard line and was unable to do so. This is encouraging for him at the next level.

If you’ve watched him as a blocker, you already know Moreau isn’t afraid of contact. You can see him release and once he got the ball in his hands, he wasn’t going to be denied the end zone. I love the physicality to his game, and I want a tight end who has the ability to play on all three downs; Moreau can be that guy.

Moreau shined during his week of practice at the Senior Bowl. He was one of five players named offensive practice players of the week. This clip shows him getting off the line with an excellent release, positioning his body well to put him in a position to make a very nice grab in the end zone.

While I wholeheartedly believe that Hockenson and Fant are at the head of this class, I think there will be rookies selected much later than can offer quality production. I don’t dislike players, I dislike player cost. In rookie drafts last season, we saw TEs Chris Herndon and Ian Thomas being selected late or going undrafted. Mark Andrews, who nobody was selecting in the first round of rookie drafts, has shown flashes of potential top-15 upside. We all know the volatility of the running back position due to the injury risk of a high collision position, we should also be viewing TEs in the same light. That position takes a beating, and investing a high rookie pick on a player outside of a TE premium format, does not seem like the best bang for your buck.  Even then, I’d much rather find value in the mid to latter parts of rookie drafts for that position. Don’t forget George Kittle was the 9th TE off the board during the 2017 NFL Draft. Ian Thomas and Chris Herndon were the 6th and 7th TEs drafted last year. Foster Moreau could offer that type of value this season. You probably won’t have to spend a rookie pick on him which is good. Pluck him off your league’s waivers after the draft, stash him away on your taxi squad, you’ll eventually see a return on that investment.